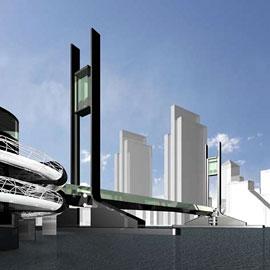 At Mayor’s Question Time on Wednesday, Liberal Democrat London Assembly member Caroline Pidgeon asked Boris Johnson whether he would consider supporting the construction of a bridge across the Thames for pedestrians and cyclists linking Rotherhithe with Canary Wharf. Johnson agreed there should be a crossing in that area and invited Sustrans to speak to his team.

The bridge – originally referred to as the Brunel Bridge – was originally mooted in 2006 and Transport for London (TfL) and Sustrans approached engineering consultants Ramboll to investigate feasibility. The scheme was not followed through by TfL but Sustrans has remained keen.

Ramboll identified the site at Durand’s Wharf due to its proximity to housing, existing transport links and cycle networks. However, the Thames sees heavy traffic in this area, which demands a high bridge which can open for the passage of large cruise ships.

Ramboll said of their design: “The approach ramps are configured in a helical design to facilitate a gradual 12m rise from shore to deck, allowing cyclists to remain in the saddle

Johnson apparently envisaged something similar: “Is it a sort of curly-wurly Fisher-Price thing?”

He then suggested that a catapult could be used. Pidgeon said that Sustrans is to launch a competition for designs for a new bridge and suggested that Johnson could submit his catapult suggestion for consideration.

Pidgeon said that such a bridge would increase cycling and provide a needed river crossing as well as reducing overcrowding on the Jubilee line. Johnson was cautious but open-minded and invited Sustrans to come and speak to his team.

“Please tell them to come in as soon as possible and we’ll take a look at it. I’m always interested in that type of scheme. I do agree there should be a crossing in that area – let’s see what they’re proposing.”