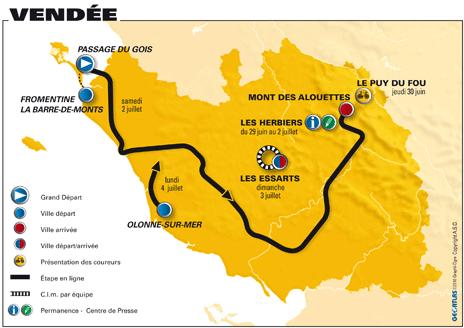 Following this year’s Grand Départ in Rotterdam, the 2011 Tour de France will get under way on home roads, and in a break with what has become the established format of the race, the opening stage will not feature a time trial but will instead see the peloton negotiate an uphill finish on the 232-metre high Mont des Alouettes, near the town of Les Herbiers.

As happened in 1999 and 2005, the opening days of the race will unfold in the Vendée department on the Atlantic coast, which lies below Brittany and above Bordeaux.

As we reported earlier this week, Lance Armstrong hasn't ruled out continuing to race in 2011, and with the previous two Vendée starts matching exactly the start and finish of the Texan's seven-year domination of the race, he may take another Grand Depart there as an omen that he should try his luck again next year.

Stage 1 starts on the island of Noirmoutier, and will immediately take the riders across the infamous Passage du Gois, a four-kilometre causeway that gets submerged by the tide twice daily.

The slippery road sealed its place in Tour history in 1999 when a 25-rider pile-up on Stage 2 caused a six minute split in the peloton and put paid to the chances of many pre-race hopefuls, including Alex Zülle, who eventually finished second on the podium in Paris, seven minutes behind Armstrong.

Noirmoutier is also where in 2005 David Zabriskie won the opening day’s individual time trial to claim the yellow jersey by two seconds from Armstrong, although the latter, of course, was wearing it by the time the race reached Paris three weeks later to claim his seventh and – so far – final victory in the race.

Stage 2 of next year’s race sees a 23-kilometre team time trial around the town of Les Essarts, while Stage 3 will commence in Olonne-Sur-Mer, heading north to an unspecified destination – there’s no shortage of large towns within striking distance along the Loire Valley and beyond that are used to hosting stage finishes – which would suggest a clockwise itinerary, with the Alps arriving before the Pyrenees.

The latter figure prominently in this year’s race, the route of which celebrates the centenary of the Tour’s first mountain stages in 1910.