The See.Sense is billed as a smart light that automatically flashes brighter and faster to improve your visibility when you most need to be noticed. It was successfully funded through Kickstarter last year (which we reported on) and it’s now available to buy costing from £45. 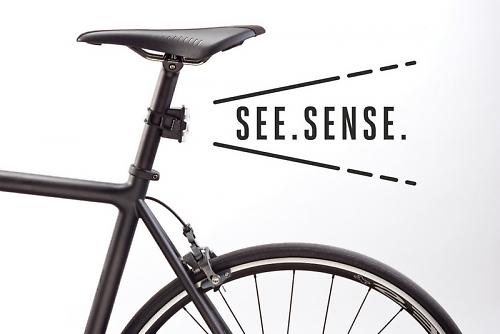 See.Sense, the idea of Belfast-based Philip McAleese, uses a combination of an accelerometer and a light sensor to monitor speed and light levels to provide more brightness in certain situations.

The accelerometer can detect whether you are slowing down, say when approaching a junction, roundabout or traffic lights, and flash brighter and faster. The light can also respond to situations like approaching vehicle headlights and boost the brightness accordingly. During the daytime the light can adjust to sudden changes in light such as when you ride through a tunnel or under the shadow of trees.

The sensors measure acceleration and orientation up to 800 times a second and a micro-computer analyses the data to identify the scenario and the flashing and brightness pattern is calculated. There are no on/off switches on the light. You simply use motion gestures to activate it. The stays on when you’re waiting at the traffic lights so no concerns with it going out when you’re stationary for a long period of time. The lighting modes can be adjusted to preference, switched between flashing or steady beam, and whether you want the light to react to the light or environment.

The inventors of the See.Sense light have also worked on promoting side visibility of the lights, and used a Fresnel lens element to increase the viewing angle of the light. They claim this spreads the light over more than 180 degrees. They have used CREE LED’s, and the company claims a 12 hour run-time. That depends on usage though of course, you might get shorter or longer depending on what time of day you’re using it. The lithium ion battery is easily charged via a USB lead, and a ‘Fuel Gauge’ gives you a clear indication of the remaining juice.

The light is small, just 5.8 x 3.8 x 4.8cm and weighs a claimed 55g. It’s claimed to be water resistant and with a Lexan polycarbonate case should be plenty tough enough for the demands of daily winter commuting.

See Sense - The intelligent bike light. from See.Sense. on Vimeo.

The See.Sense was successfully funded through Kickstarter and is now on sale through their website. A front and rear set costs £79.99 or you can buy an individual light for £44.99.

We’re going to try and get one in for review as we’re intrigued to see how the See.Sense actually works on the road.