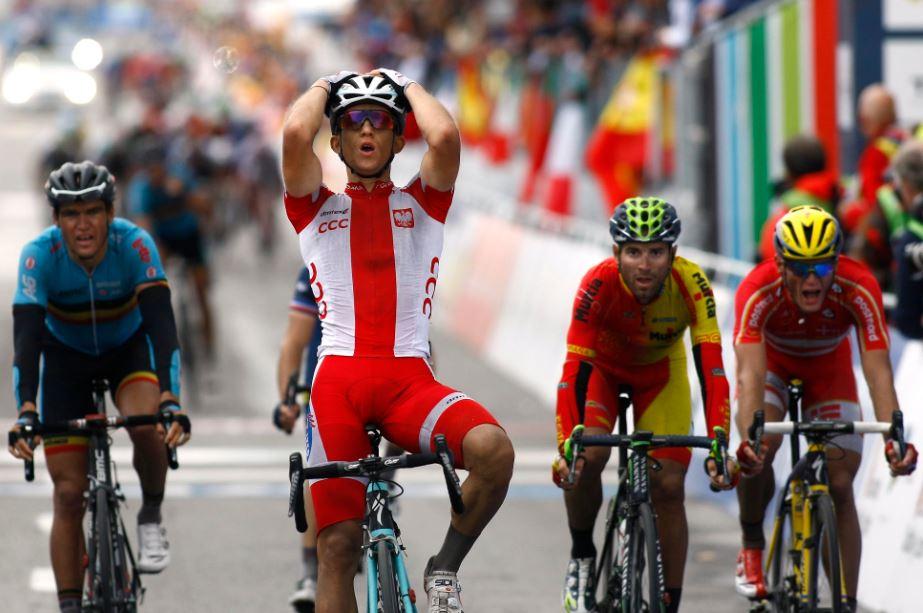 Poland's Michal Kwiatkowski is the new road world champion, launching a brave solo attack at the end of the 254.8km race in Ponferrada to hold a pursuing group at bay, sitting up to savour his victory with Australia's Simon Gerrans and Alejandro Valverde of Spain crossing the line 1 second behind to take silver and bronze, respectively.

The 24-year-old's victory was the culmination of a team effort that saw his fellow Polish riders control the break for much of the day on a rain-soaked course. Greta Britain's Ben Swift finished 12th in a group 7 seconds behind the new world champion

The race, which comprised 14 laps of an 18.2km circuit around the town in the northwestern Spanish region of Castilla y Leon, looked likely to come down to a bunch sprint unless a rider stepped forward to cast caution to the wind on the final, punchy Mirador climb.

A trio of escapees – Alessandro de Marchi of Italy, France’s Cyril Gautier and Denmarks MV Andersen, led the race through the penultimate lap and were joined by Belarus rider Vasil Kiryienka just ahead of the bell.

They had a lead of 36 seconds over a small group of pursuers, with the main group, including all the favourites, a further 8 seconds behind.

But with 10km left, they had just 15 seconds on the chasing group of around 50 riders, where Italy, Belgium and Spain all had strength in numbers.

The quartet out in front were taken back ahead of the final, short but punchy Mirador climb, where the Kwiatkowski, who had jumped across shortly beforehand, seized the initiative to make the move that will put the Omega Pharm-Quick Step rider in the rainbow jersey for the next 12 months.

"Our team did incredible work today. We just tried to control the bunch the whole day. I was in the front and I didn't plan to attack on the second-to-last descent. But I saw the opportunity to be in the group in front, which had five riders at that point before the last climb.

"I caught them and could relax a bit, and control my effort on the last climb. Even a small advantage on the last climb can be difficult to chase down a rider like me from there. I saw it was possible from the Under-23 race before, that it's possible to make it. I'm not the best sprinter compared to guys like Simon Gerrans and Alejandro Valverde, but in the end it worked and it is an incredible feeling.

"I think for Polish cycling this is really important to have a beautiful victory like this. This season has been amazing for Poland with Rafal Majka and his performance at the Tour de France for example. Now I have this rainbow jersey, and it's an amazing feeling. I told the guys at a meeting yesterday that I felt great and I said it again at the start of the race.

"I really needed support from them and they did it all the time. I felt relaxed all day. With these weather conditions it was important to stay in front. This made it much easier for me to have such great help from my teammates. It kept me comfortable and gave me big energy at the end.

"I have to thank them, and I have to also dedicate this to my girlfriend Agata and the Polish nation as they give me such big morale, and I am so proud to give this back to them."

1
Police chief says clip of Range Rover driver hitting cyclist with car doesn’t tell full story
2
Near Miss of the Day 812: Van driver hits cyclist during impatient overtake on country lane
3
Drug driver sentenced to 21 months in prison for killing cyclist – seconds after using his phone to text friend
4
You can be the first to own the new Colnago Prototipo… but it’ll cost you – plus more tech news from SRAM, Pirelli, Brompton, Apidura and more
5
Government to crack down on “reckless” riders with causing death by dangerous cycling law
6
Police officer dishes out fines to cyclists – then crashes his SUV into one in a cycle lane
7
"Unacceptably gross": Peloton cyclist's complaint over relative leaving bike in a sweaty mess goes viral
8
road.cc Recommends gets refreshed with 14 brilliant products