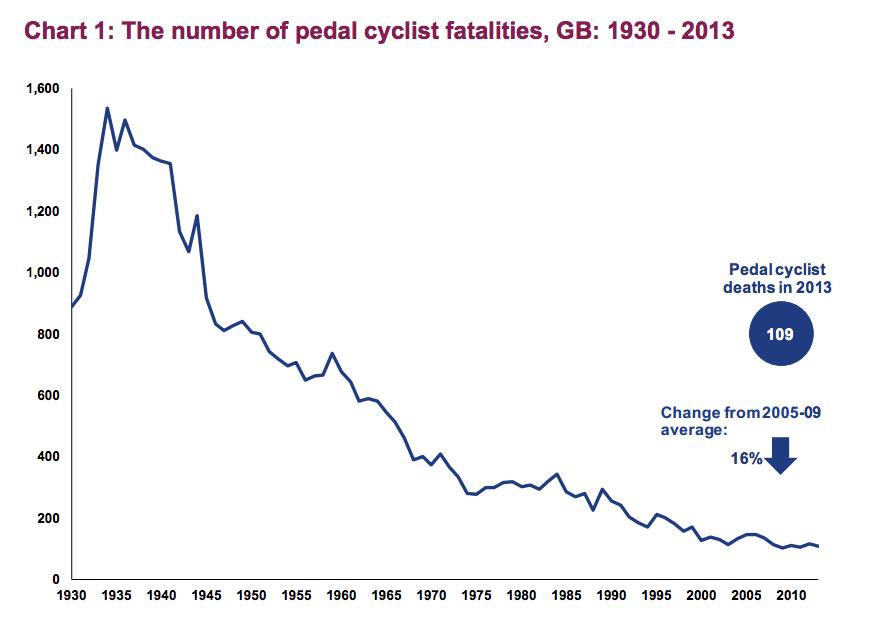 Cycling deaths and serious injuries down in 2013, says DfT

Fewer cyclists were killed or seriously injured on the roads in 2013 than the previous year, according to Department for Transport (DfT) figures released today, but the number of cyclist casualties has not declined as quickly as the total road death toll.

Last year there were 109 cyclist deaths on the roads of Great Britain (Northern Ireland stats are collected and reported separately), down from 118 in 2012. That figure has fluctuated between roughly 100 and 120 over the last six years, so even an apparently substantial drop shouldn't be afforded much weight. The report says: "Given the fluctuating nature of this figure it is not possible to tell whether this latest annual change is simply a one-off fluctuation or the start of a longer term downward trend."

Perhaps significant is that the number of cyclists seriously injured fell by two per cent to 3,143 in 2013 from 3,222 in 2012. This is the first decrease in reported seriously injured cyclist casualties since 2004, but the report again warns that it's not possible to be sure whether this is the start of a long term trend or a one-off fluctuation.

The number of seriously injured cyclists is still 31 per cent higher than the 2005 to 2009 average, the report says. Road traffic estimates put the distance cycled in the UK as having increased 13 percent from the 2005-2009 average.

This chart shows that the relative change in deaths and serious injuries (KSIs) per distance travelled. While things have clearly improved for pedestrians and car occupants, the roads have become more hazardous for cyclists. 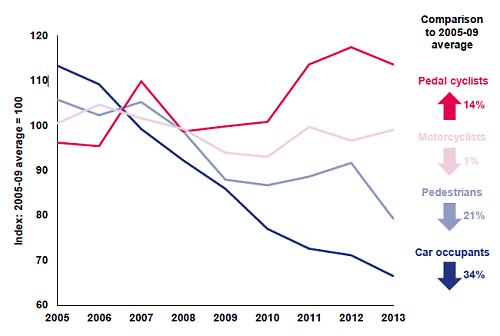 The DfT has included a special report focussing on cycling in its analysis of the 2013 figures. Among other things it puts current figures and trends in a deeper historical context. The highest annual figure for cyclist deaths was a staggering 1,536 in 1934. The number has been declining ever since though the decline has levelled out in recent years.

Much of the reduction may simply be due to the massive drop in cycling in that time, though. In 1949, the first year for which records are available, bikes accounted for 35 per cent of road traffic in Great Britain. Today the figure is just 1 per cent.

Turning its attention to the gender and age of cyclists who are killed or seriously injured, the report finds that the casualty rates of male and female cyclists roughly correspond to their activity levels. Females ride on average only a quarter as much as males. Males make up over 80 percent of KSI casualties, and 80 percent of 2013 deaths. That contradicts the widely held view that women are disproportionately represented among cyclist casualties. An analysis on the socio-political underpinnings of that belief is beyond the scope of this article.

One group that is over-represented in the stats is young males in their teens and twenties, who accounted for around 30 percent of KSIs in 2013, but only 25 percent of miles cycled.

Male cyclists in their 30s and 40s are the most under-represented male group, the report says, making up 40 percent of KSIs despite comprising 50 percent of all male cycling.