Gone are the days of there being just one or two power meter options, the market is now being flooded with choice with new options all the time. Spanish company Rotor, better known for their non-round chainrings, launched the Power LT crank-based power meter this summer, which uses a non-driveside power meter to both reduce weight and the price. It costs £799. Rotor says the new LT (LT standing for Light) was developed at the request of the Lampre-Merida professional team who wanted a simpler and lighter power meter. The new Power LT has already been put to use by the Lampre-Merida team, getting its first outing at the Tour de France and in subsequent races. It also allows Rotor to offer a more affordable version of their power meter, and at £799 it is one of the more affordable options now on the market. That price includes the whole crankset as well, though you do have to buy chainrings on top of that.

The new Power LT captures power data from strain gauges inside the left, non-driveside, crank arm. It essentially doubles this data using a mathematical equation to normalise the power, much like Stages and Garmin do. For most people such a power meter shouldn’t be a problem, but if you do have a serious leg imbalance and have decided that is something you want to work on with your pedalling technique, a single-sided power meter isn’t going to be much use. For most people the data received by a single-sided power meter should be adequate. 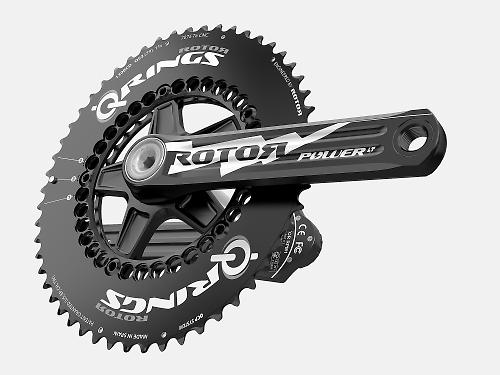 The Power LT transmits the data via ANT+ to any compatible device, so any of the current Garmin Edge GPS computers will work just fine. It adds a claimed 53g to their 3D+ chainset, using the same regular driveside arm, spider and spindle, just with a new non-driveside crank arm. Complete weight is claimed to be 535g for a 170mm chainset. It’s available in 110 and 130 BCD options and various arm lengths. The battery is easily replaceable when it runs out.

Rotor have priced the new Power LT at £799, which is about the same as Stages and Garmin, so the competition at this pricepoint is really starting to hot up. The important thing to remember is with the Rotor offering you're getting the whole crankset, though that doesn’t include the chainrings. The Power LT is compatible with most bottom bracket standards on the market.