But two proposed routes dropped as others delayed
by John Stevenson

London's notorious Cycle Superhighway 2 from Bow to Whitechapel will be rebuilt so that its entire length is fully or partially separated from motor traffic by 2016, mayor of London Boris Johnson announced this morning.

Cycle Superhighway 2 was described as “just blue paint" by a police crash investigator at the inquest last year into the 2011 death of Brian Dorling at Bow Roundabout. Even before it opened the route had been strongly criticised by the Metropolitan Police and cycling bodies for encouraging cyclists to use one of London's busiest arterial routes without providing any protection.

After the inquests into the deaths of Brian Dorling at Bow and Philippine de Gerin-Ricard at the Aldgate end of Cycle Superhighway 2 coroner Mary Hassall issued a prevention of future deaths report instructing the mayor and Transport for London (TfL) to explain what action would be taken to make the cycle superhighway safer.

Announcing the public consultation of the plans for the upgraded route, TfL said: "CS2 runs on a busy and intimidating road, but currently offers cyclists no physical protection from motor traffic.

"The number of cyclists on CS2 increased by 32 per cent in the year after the route opened. At some points on the route, the average number of cyclists a day is around 2000 in each direction. This upgrade would improve safety and convenience for these cyclists. It would also encourage the many people who would like to cycle but currently feel unable to do so."

The new route will be separated from traffic by kerbs for most of its length, with 11% of the route semi-segregated using high-visibility wands. The necessary space will come from reducing the width of traffic lanes to 3m, removing the central reservation and narrowing the footway.

At larger junctions, cyclists going straight on will have priority, while motor traffic turning left waits. This is intended to reduce the danger of a the 'left hook' collisions that have claimed the lives of many London cyclists in recent years. In several places eastbound traffic will be prevented from turning right.

Cyclists will get an early green light at several junctions, allowing them to enter the junction before motor traffic. This will be different from the flawed design at Bow Roundabout that allows a handful of riders into a 'cyclists' gate'.

All bus stops on the route will have bus stop bypasses. A similar approach is proposed for bypassing parking and loading bays. 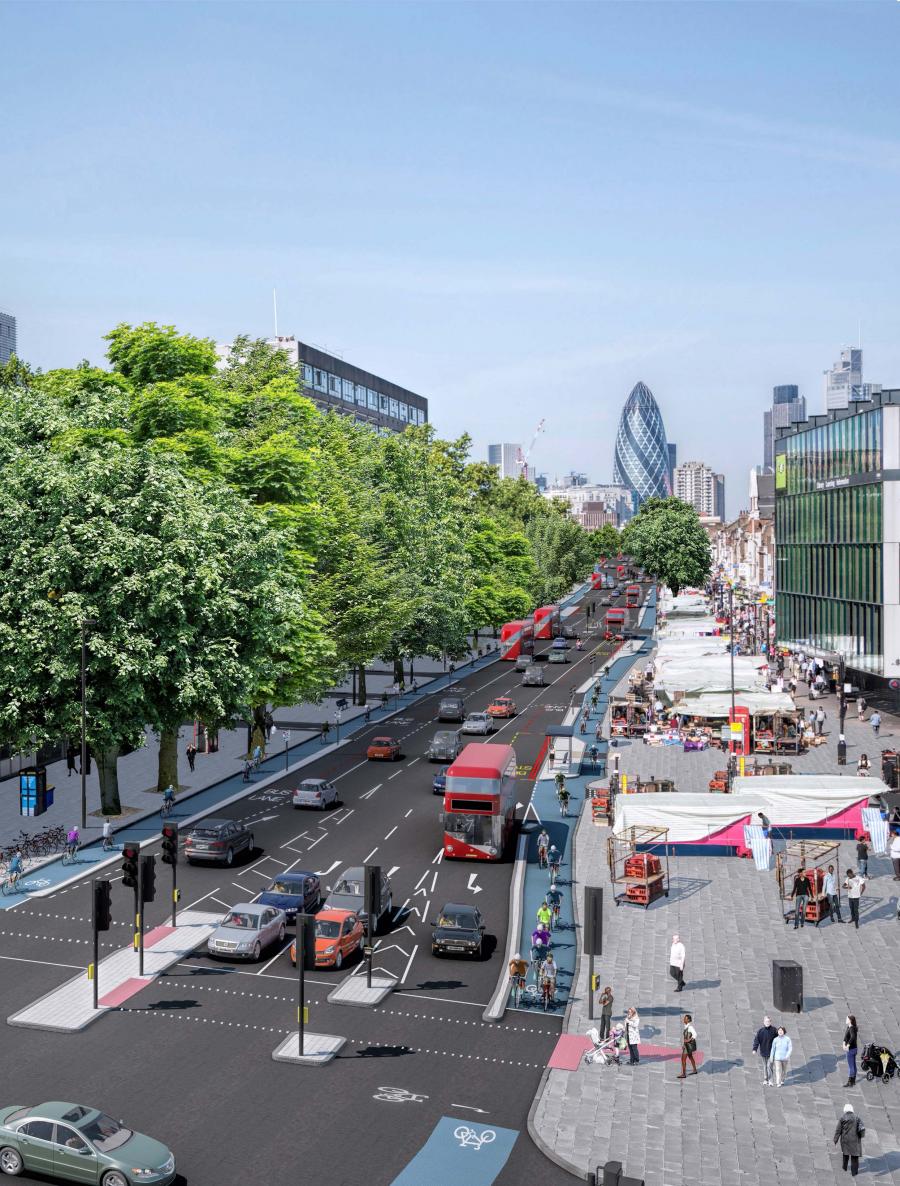 London Cycling Campaign has welcomed the plans. Campaigns manager Rosie Downes said: “These plans are long overdue, and urgently needed. The current strip of blue paint offers no legal or physical protection for cyclists. As with the North-South and East-West cycle superhighway proposals we will be looking closely at the detail, but we’re pleased to see the Mayor is finally delivering on his promise to provide the dedicated space for cycling that’s so urgently needed on this route.”

Meanwhile, more London businesses have thrown their support behind plans for new cycle superhighways crossing central London from east to west and north to south.

London First, the Chamber of Commerce, and the City of London Corporation have all expressed concerns about the new superhighways. But a growing number of business leaders have backed the plans.

Hammer Films, famous for horror movies back in the sixties and seventies, clearly thinks London's current cycling environment could be a character in one of those movies. Marc Schipper, Hammer's CEO said: "A large proportion of our London team commute in by bike. They and I have a right to get to work safely and we support the mayor’s plans for segregated infrastructure.

"In an industry where thousands of collaborators get around London by bike, the least TfL can do is support their need for separate and safe cycling infrastructure.

"The Mayor’s plan and vision for cycling are great news for the film business in London."

"We are becoming at last a true cycling city; and that is why we need to do more to help, and to do it fast," wrote Johnson.

"We want the world on their bike: not just chiselled whippets in lycra. We want a cycling environment that is equally welcoming to women, to families, to pin-striped captains of industry wobbling gently along – the kind of cycle-friendly environment you see in Copenhagen or Amsterdam.

"There is only one way to create this paradise, and that is to invest massively in making cycling safer."

However, it's not all good news for London cyclists. Two planned cycle superhighways have been dropped by Transport for London and others have been delayed.

Only four of the 12 cycle superhighways announced in 2009 have been completed. Consultations are planned for this autumn on CS1; on CS11 for spring 2015 and for CS4 in winter 2015.

TfL is blaming "deliverability constraints within TfL and its supply chain" for delays building Cycle Superhighway 5, which will be at least 2.5 years late.

Darren Johnson said: “The Mayor has dithered, delayed and dropped so many of his promises on cycling. I have a real worry that Boris Johnson will leave office having failed to build the safe cycle lanes that are so desperately needed."

He emphasised that improved cycling facilities would benefit all Londoners. "Encouraging more people to cycle by making it safer, will means less people in cars and on the overcrowded public transport system."