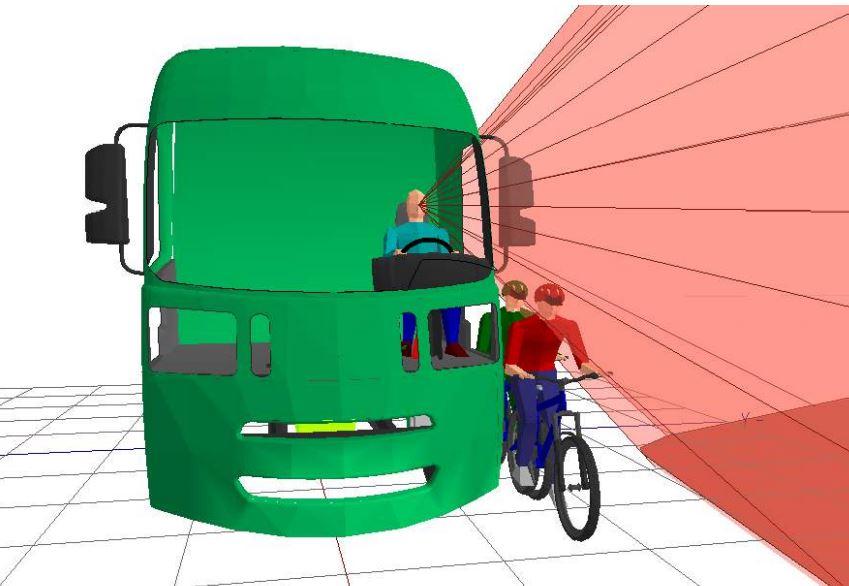 Lorry redesign could save hundreds of lives, says new study commissioned by TfL and T&E

A study into lorry design conducted for Transport for London (TfL) and the think tank Transport & Environment (T&E) says that introducing longer, more rounded cabs and installing extra glass panels to improve the driver’s direct vision and eliminate reliance on mirrors could help prevent the deaths of hundreds of cyclists and pedestrians in Europe each year.

Using computer modelling software, they analysed the fields of vision of a driver in a lorry with a “brick-shaped” cab typical of those on the roads today, and four iterations of a concept lorry designed by German engineering consultancy, FKA.

They noted that “unlike for cars, Europe has no rules guiding what a lorry driver should be able to see with his own eyes (direct vision). Instead European rules focus on indirect vision, i.e. through mirrors, but while these are useful, the multitude of mirrors and their often distorted images are no substitute for decent direct vision.”

The report also noted that there is a time lapse involved in drivers having to scan through perhaps six mirrors as well as using their own eyesight through the vehicle’s windows before pulling away, and said “if this time period is four seconds, this is enough time for a cyclist to undertake the HGV, with the driver being unware of his or her presence.” They recommended that research be conducted “which establishes how drivers interact with the six mirrors, and if the requirement to examine six mirrors to achieve situational awareness is actually achievable in high workload situations.”

On the other hand, the various iterations of the FKA design were all found to reduce blind spots, with one that had additional windows both at the front and side of the cab giving the driver the greatest direct vision.

Project leader Dr Summerskill said: “Blind spots can be a significant factor in fatal accidents with lorries. The study shows that the size of these blind spots can be minimised through improved cab design, the reduction of cab height and the addition of extra windows.”

However, France, Italy and Sweden – home respectively to major truck manufacturers Renault, Iveco and Skania – have come under pressure from those companies to delay implementing the regulations for as long as possible, meaning they may not be in force across the EU until 2025.

William Todts, senior policy officer of T&E, said: “Not only drivers, but politicians too need vision. It’s incomprehensible that we allow huge 40-tonne mammoths on our roads without making sure the people behind the wheel actually see what’s going on. After decades of tinkering with mirrors, we need to take this once-in-a-generation opportunity and make direct vision compulsory for new lorry designs.”

Across Europe, lorries are involved in 4,200 deaths each year and around 1,000 of those involve vulnerable road users such as cyclists and pedestrians. In the UK, one in three cyclist fatalities involves a lorry – rising to half in London – while in other countries HGVs are also responsible for a disproportionate percentage of fatalities, standing at 38 per cent in the Netherlands and 43 per cent in Belgium, for example.

Previous research from Loughborough Design School had identified 1,906 road traffic incidents involving lorries from 2008 in the police database STATS19, which forms the basis of official casualty figures published by the Department for Transport.

In each of those incidents, “vision affected by vehicle blind spot” was cited as a factor, and for the latest study, the results were filtered “to remove cases where vehicles were parked, that did not make contact with another vehicle or object, or for which there was unknown or missing information.”

Of the 704 remaining incidents, 637 resulted in slight injury, 51 in serious injury, and there were 16 fatalities. In 31 per cent of those incidents, the driver had pulled away, 25 per cent were due to drivers reversing, left turns accounted for 19 per cent, and right turns for 7 per cent.

Vulnerable road users made up 30 per cent of victims in incidents involving the driver pulling away, and 74 per cent where the vehicle was turning left.

Leon Daniels, managing director of surface transport at TfL, said: “We are committed to improving road safety for everyone. Through the funding of innovative studies it has been demonstrated to Europe how the vehicle manufacturing industry can continue to improve their safety standards.

“Freight is integral to the economy of Europe, but it needs to operate in the safest manner possible. Improved and increased direct vision will benefit all. Safety will be improved, efficiencies will be made and lives will be saved,” he added.