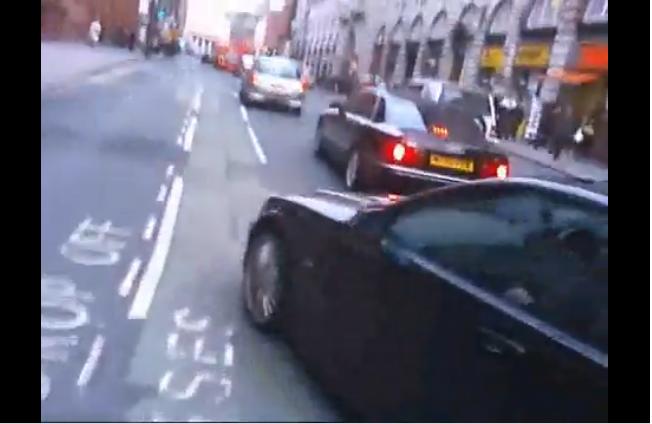 Cycling campaigner and road.cc regular Joby Spragg has received threats of violence after his methods of filming bad drivers were revealed in the national press.

Joby, who posts here as jobysp, uses a helmet-cam to record the antics of motorists on his way in to work in Manchester. The results are posted on his website www.fightbaddriving.co.uk  in an attempt to shame thoughtless drivers who cause near-misses.

The campaign caught the attention of the national press, but the publicity has led to some unwelcome attention. “The articles have also lead to some ridiculous comments,” he wrote on his site, “and I’ve read a couple of forum posts about killing me like a dog and running me off the road and my wife accidentally stumbled across these. Really people. Really? All joking aside – that's not funny. Threats aren’t issued to the government when they run their drink drive campaign? There are lots of charities out there that advertise and campaign for safer road use too.

“The video clips aren’t used for any form of malice – they are just here to make a point and draw out discussion. For instance – the big green boxes at the front of most road junctions these days (ASLs) are there for cyclists – allowing drivers the ability to see the cyclist in front and not have them in their blind spot – which is dangerous for both parties. Just because there isn’t a cyclist in front of you when you pull over the junction doesn’t mean their won’t be a cyclist there in 2 minutes.”

Joby denies that he's waging a 'one-man war' against drivers. Instead, he's attempting to make people aware of accident blackspots.

He wrote: “I don’t want to find out in three weeks time that someone has been crushed to death under a car at Denton Roundabout whilst crossing the road – knowing that I could have started questioning the council about the traffic light system there and actively trying to do something about it, rather than ignore what is definitely a problem at this roundabout.

“The site has been going for a good while and hasn’t just sprung up out of nowhere. The first clip was posted back in October of last year. Since then, the site has gone through a series of changes all for the better. It is slowly becoming a community and I invite everyone (drivers, cyclists and pedestrians) to submit footage to the site. If we all notice there is a serious blackspot we can do something about it – even just making people more aware is enough sometimes.”

However, the negatives have been countered by a lot of positive press. Joby says the site has been supported by cyclists, drivers, 'driclists' (cyclists who drive) and motorbikers. “ I’ve even, if the comments are to be believed, had a person who was involved in one of the clips post onto the website – which is fantastic,” he said. “He nearly hit the side of me whilst pulling out of a side road. It wasn’t his fault, it wasn’t my fault, nor was it the van's fault that was parked obscuring the driver's view – it's the council's fault for the way they’ve laid out the parking bays along Manchester Road. But he had the courtesy at the time to get out of his vehicle and make sure I was OK and has even popped on here to support the site.”

Joby says the filming will continue until councils install traffic-calming measures at the accident blackspots caught on his camera.