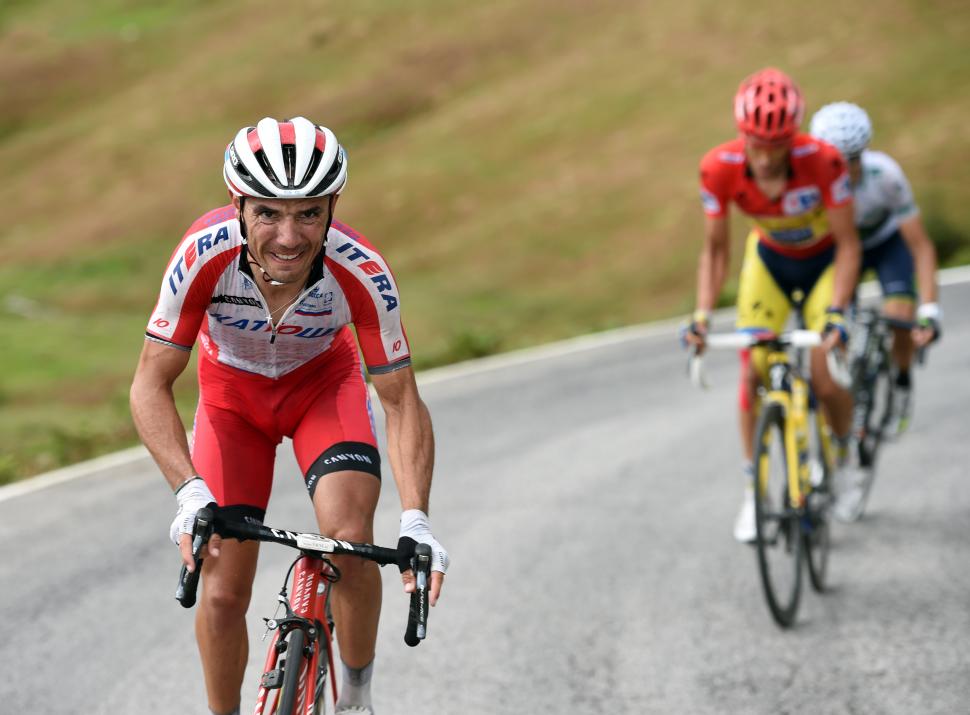 Seconds Out; Round 2! Sky’s Philip Deignan says he was whacked by Joaquin Rodriguez at Vuelta

Incident took place on Sunday, the day before Brambilla and Rovny were thrown off race for fighting
by Simon_MacMichael

There’s clearly been something in the water in Asturias over the past couple of days – or perhaps someone has filled the Vuelta riders’ bidons with the cider the region is famous for – as news emerges of a second altercation on the race, with Team Sky’s Philip Deignan claiming to be on the receiving end of a punch from Katusha’s Joaquin Rodriguez on Sunday.

The Irish rider, winner of a Vuelta stage in 2009 when he rode for Cervélo TestTeam, claims in the latest episode of the blog he is writing during the race for the Irish Independent that the Spaniard left him with a cut lip after hitting him during Sunday’s Stage 15.

The news follows a bizarre dust-up caught by TV cameras on yesterday’s Stage 16 between Omega Pharma-Quick Step’s Gianluca Brambilla and Ivan Rovny both kicked off the race while the stage was still in progress for exchanging blows.

Deignan recounted how as he was working for Chris Froome coming over the top of the penultimate climb, helping him move up to join Saxo-Tinkoff at the head of the race.

“As we hurtled along in the rain at around 50kph, Katusha's Spanish team leader Joaquin Rodriguez, who is fourth overall, took umbrage to my presence and nudged me out a little bit. So I held my ground and nudged him back,” he said.

“As we continued riding, suddenly, out of the blue, Rodriguez turned towards me and punched me full in the face, splitting my lip and leaving me both stunned and fuming.

"Thankfully an immediate desire to knock the little Spanish climber out was quelled and I had the restraint and presence of mind to realise that hitting him in such treacherous conditions would only worsen the situation and endanger the riders around us.

“As Rodriguez' punch was greeted with a chorus of shouts from the rest of the peloton, I warned him that I'd deal with him off the bike.”

It’s what, in boxing terms, would be described as a bit of a mismatch. Rodriguez stands 5’ 7” and weighs just 57kg, ceding two inches and 10kg to the Irishman – who has also trained in the ring in the past.

In other words, a featherweight attempting to take on a junior middleweight, according to the IBF’s classification.

“After the stage, I was so angry that all I wanted to do was find him and show him what a couple of years training in Letterkenny Boxing Club had taught me,” revealed Deignan, “but as the evening wore on I began to realise it wasn't worth stooping to his level.”

The Team Sky rider said that prior to the start of yesterday’s stage, “when his directeur sportif marched him [Rodriguez] over to our bus before the start today and made him apologise, I swallowed my pride and simply let it go.”

He added that the incident gave him the motivation to help Froome put time into the Katusha rider on yesterday’s stage, which saw his leader at Sky move to within 3 seconds of second place overall as he finished runner-up on the stage to Alberto Contador.

A spokesman for Rodriguez's Katusha team told Reuters that Deignan had misinterpreted the incident.

“It was more a gesture saying ‘what are you doing?’” he said. “He did not mean to touch him.”

Rodriguez himself said at a rest day press conference today that he was "surprised" to hear of Deignan's comments, that it was a racing incident and the Irish rider had exaggerated what had happened.

Team Sky rider Peter Kennaugh had a rather different opinion, and shared it on Twitter in forthright terms.

He wrote: “What a lying prick, take responsibly [sic] for your actions coward!”