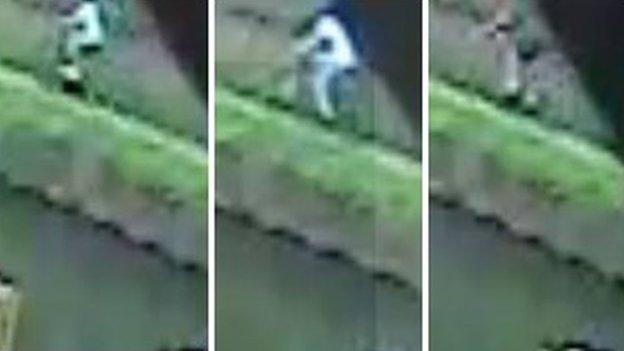 Were you in the area? Did you pass the missing teenager on the Grand Union Canal towpath?
by Sarah Barth

Police are searching for five cyclists who rode past the last known location of a teenage girl who has been missing for a week in West London.

Alice Gross, 14, was last seen at 13:00 BST on 28 August leaving the family home in Hanwell. She walked along the Grand Union Canal at 16.23 BST, where five cyclists were seen passing on CCTV footage, near the Trumpers Way Canal Bridge in Hanwell.

The grainy and distant footage shows:

It is unclear what sex or age the cyclists are.

Alice, who was recently diagnosed as suffering from anorexia, told her family she was going to meet some friends and would be back that evening. She is described as being 5ft 2in tall, slim, with shoulder-length light brown hair.

She was wearing dark blue jeans, a dark green lacy cardigan with a grey t-shirt, and denim Van's shoes. She may also be wearing tartan-framed spectacles.

Instead she went for a walk alone along the River Brent tow path and did not return.

Det Ch Insp Andy Chalmers said: "If you are one of the cyclists pictured then please call the investigation team immediately because we need to find Alice."

The teenager has been described as being 5ft 2in tall, slim, with shoulder-length light brown hair.

Last night police confirmed they had arrested a man on suspicion of murder.

The 25-year-old man was arrested in the Ealing area at approximately 1700hrs.

He is currently in custody at a west London police station.