The big trend at Eurobike - and it's a really big one - is disc brakes on road bikes. This has created several debates around disc rotor size and axle technology. On the latter topic, most manufacturers are either sticking with conventional quick releases or borrowing thru-axle standards from the mountain bike world, but German manufacturer Focus have developed a new and really smart thru-axle technology.

It's called Rapid Axle Technology, or RAT for short. We had a hands-on demonstration at the show, to see how easy it is to use. It's really easy. So easy that we could fit it into this six second video:

Unlike a regular thru-axle on a mountain bike which has to be threaded into the dropout and then clamped shut, the RAT thru-axle uses a design that only requires a 90 degree rotation of the axle in the dropout before the lever is closed. 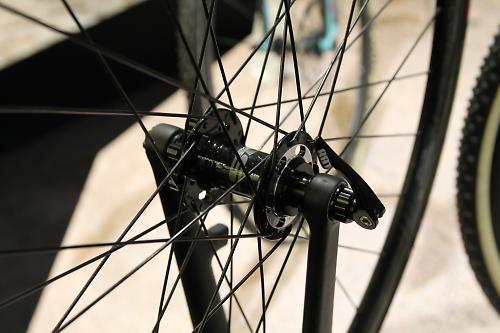 Focus are using this new RAT axle on their equally new Cayo Disc bike and their Mares cyclo-cross models. They use a 15mm axle in the fork and the main reason for this is that they can actually manufacture the fork with a single weave of carbon fibre running the entire length of the fork and wrapping around the closed dropout. 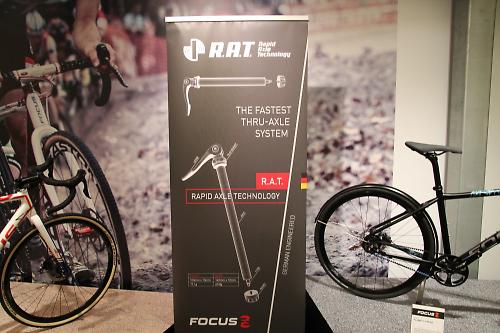 The demonstration on the Focus stand was getting a lot of attention. The buzz is that a few manufacturers have shown an interest, so there is the potential that we could see this axle technology appearing on a few bikes other than those in the Focus range in the future. Of course some people argue that there is no need for thru-axles on road bikes  - if your fork is stiff enough it won't twist anyway goes the argument - but Focus clearly feel the benefits are worthwhile enough to have developed their own thru-axle solution. 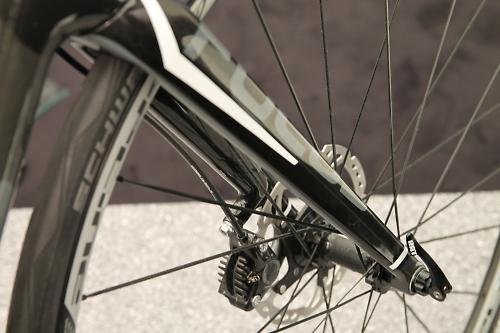 Focus also repeated to road.cc what they told us at the launch of the Cayo Disc, that in their testing they found 160mm rotors a preferable size option over the more common 140mm rotor size, and handled the buildup of heat generated by the discs far more effectively. This goes against the clear trend at the show for the smaller rotors, which is largely the case because Shimano recommend 140mm rotor sizes for all but the largest cyclists. 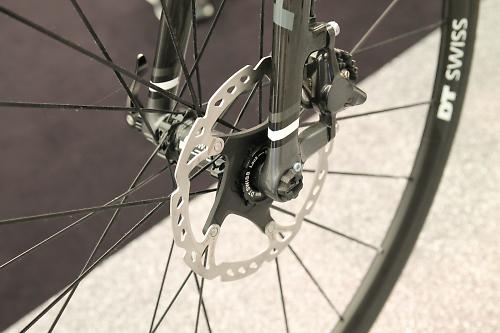 Colnago have been working with suspension fork manufacturer Manitou on HexLock which is a very similar thru-axle technology. It’ll be used on the new V1-r aero road bike but it’s not quite ready yet. We’ll have a closer look at that along with a video chat with Colnago’s chief engineer in a future article..