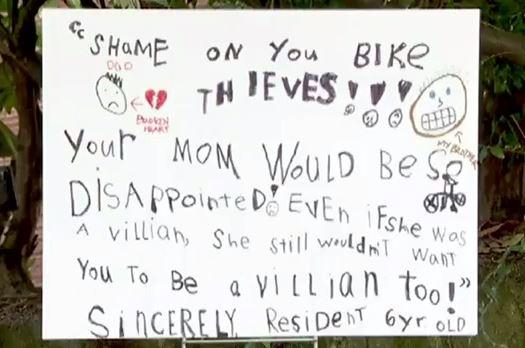 A six-year-old girl from Porrtland, Oregon, has helped recover a bike belonging to her father that had been stolen from their home – after putting a sign in their front yard shaming the thieves.

Roxy Thompson decided to take action after seeing how upset her father Rob was following the theft of six bikes worth thousands of dollars in total from their garage, reports local TV station KATU.

She wrote on the sign: “Shame on you bike thieves!!!' Your mom would be so disappointed! Even if she was a villain, she still wouldn't want you to be a villain too! Sincerely, your resident 6-year-old.”

Roxy told KATU: “It hurt my feelings that my dad was so angry and sad.”

The sign led to several leads being generated, including a viewer who saw a news report taking a picture of a bicycle they had seen that was similar to one that had been stolen.

When police followed that up, they discovered it was indeed one of the stolen bikes, which someone had bought on the street for $50, and it was duly returned by a detective to Roxy’s father.

Sergeant Pete Simpson of the Portland Police Department told KATU: “Six-year-olds can do amazing things. I talked to the detective, he said she was thrilled. It’s empowering for her and she knows people do care and police were working hard to help.”

Speaking about his daughter’s reaction to the initial theft, her father said: “At first, she offered to give me her life savings. That was a heart melter.”