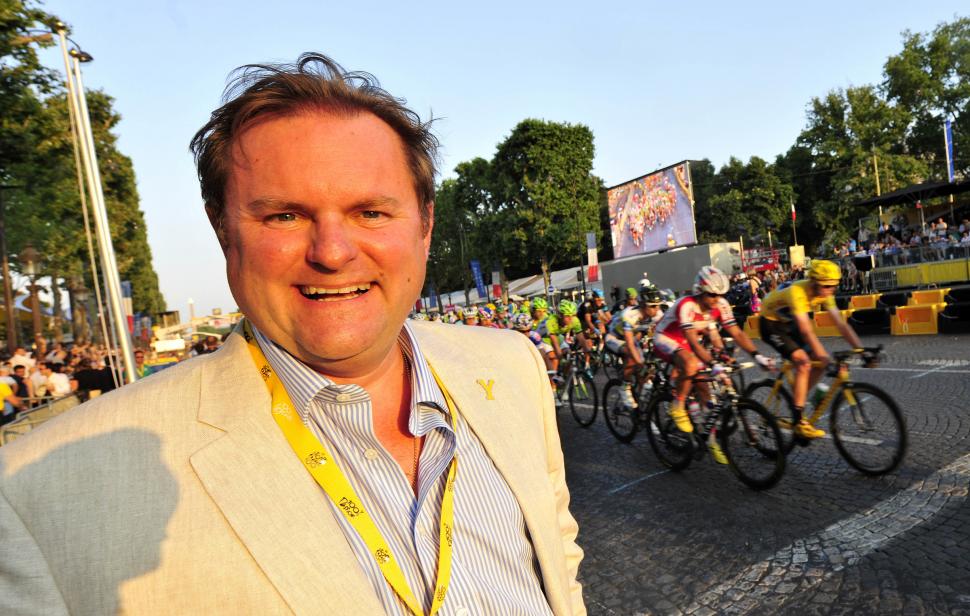 Welcome to Yorkshire’s Gary Verity, the man who brought the Grand Départ of the Tour de France to England’s biggest region, has been reflecting on an event that brought millions of people out to watch the two stages, showcased Yorkshire to the world, and also perhaps gave some substance to the phrase, ‘God’s Own County’ as it basked in glorious sunshine.

Standing on Buttertubs Pass, just a few weeks ago thronged with fans as the world’s biggest annual sporting event passed through but restored to its usual quiet and rugged beauty, Verity told the Yorkshire Post’s Sarah Freeman: “It feels a little surreal standing here now.

“The landscape was totally transformed that day. Take away those huge crowds of people and it somehow becomes impossible to spot any of the usual landmarks. I haven’t had time to watch the television footage yet, but I will. People tell me that Yorkshire looked beautiful and hopefully we have uncovered a hidden gem for people abroad.”

He said he believed that the Grand Départ could transform Yorkshire’s fortune, not least by instilling a new-found confidence in its people and businesses.

“In the past we have lacked belief. I hope the Tour changed that. I hope it showed us that when we unite we can be the best in the world. That kind of attitudinal shift doesn’t happen overnight, but it was about showing people the art of the possible.

“Wouldn’t it be nice to think that someone, somewhere in Yorkshire is now setting up a world class business and when they’re asked why they started it they’ll say they were inspired by the Tour de France.”

One notable feature of the opening week of the Tour was the contrast between the glorious weather in Yorkshire and the atrocious conditions once the race hit London then crossed the Channel.

“The weather was never in doubt,” Verity insisted. “You know in the last 12 months the Met Office forecasts were 48 per cent accurate, which means they got more wrong than they got right. I’m a farmer and you get to know more than looking at the clouds than you ever do consulting an official forecast.

“In the week before everyone was saying it was going to be a bit of mixed bag, but I reckon it’s better to have a poor forecast and it gets better than being told it’s going to be gloriously sunny and then it tips it down.

“However, it was quite extraordinary that for those two days the race seemed to exist under a beam of sunlight. I saw Marcel Kittel after he won the third stage from Cambridge to London.

“I asked him how he was and he said, ‘Well, I’m OK, but Gary, today it rained’. I told him it showed God has a sense of humour.”

He also spoke of the enthusiasm with which the people of Yorkshire had embraced the race, contrasting it with the rather more muted reception – in terms of colour and spectacle, at least – he discovered further south on Stage 3 from Cambridge to London.

“Someone asked me if we had a team of people going out placing yellow bicycles and bunting around the county. There wasn’t anything like that, it just happened. Eighteen months before we ran a series of roadshows to tell people how they could be a part of the event.

“We might have sowed the seeds, but the response from towns and villages was authentic and genuine and I think it actually shamed some councils into getting their act together.

“That, I think, was the difference. As we moved down to Cambridge the crowds were still good, but up here there were more people dressed in yellow, more people kitted out in polka dots. Basically we went more bonkers. Down south the crowd didn’t roar, instead it clapped politely.”

The 2015 Tour de France starts in the Netherlands, and the man who will fulfil the role that Verity performed so ably in the build-up to this year’s race knows that he has a tough act to follow.

“It was all worth it,” said Verity. “The Mayor of Utrecht was at Harewood House on day one. The Grand Départ goes there next year and at one point he turned to me to say, ‘So not only do we have to stage an opening ceremony and organise an arts festival, but we’ve got to get some members of the Royal Family to the start’.

“Just as he said that, the Red Arrows flew overhead. With his head not quite in his hands, he said ‘and now we’ve got to find an aerobatic display team...’.”

Verity added that he had been overwhelmed by the thanks he has received since the race left Yorkshire, saying: “I think I’ve probably shaken more hands in the last couple of weeks than I have the rest of my life.

“I’ve had emails and texts and thank you letters, most from people I’ve never met telling me how good the Tour was for them. What can I say, except it’s been pretty humbling,” he concluded.