Trek Bicycles have unveiled the Domane Koppenberg, a team issue replica of the bike ridden to Tour of Flanders victory by Fabian Cancellara earlier this year. The new model will only be available as a frameset however, in limited numbers and in Trek Factory Racing colours.

Unlike the Domane Classics, which features Pro Fit geometry (with a shorter head tube and longer top tube) and increased tyre clearance, the Domane Koppenberg uses the same H1 geometry as the Emonda SLR. This is the Domane the Trek Factory Racing choose for stage races and parcours that don't require the wider tyres of races like Paris-Roubaix. It's essentially a Domane with the comfort benefits of the Isospeed Decoupler but with the same geometry of the Emonda and Madone. 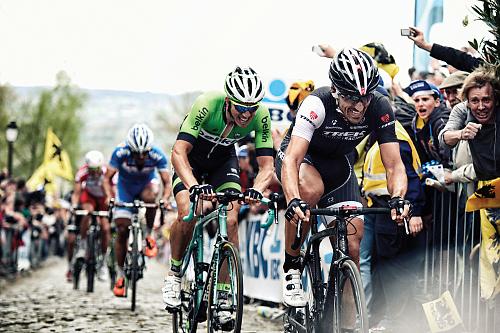 "The Classics version features our Pro Endurance geometry, which was built to pair Domane’s stability for the Classics races with a short head tube height to fit our pro racers. The Koppenberg version uses our H1 fit and geometry to make it better suited for the Grand Tours and hilly Classics races," says Trek.

Trek have been making a concerted effort to make available the same kit that the professionals race, with their Race Shop Limited offering frames and equipment raced by the pros. Of course the UCI does have a rule about any equipment being used in a professional race being available to buy within 9 months, so getting hold of such kit shouldn't really be an issue.

"This is absolutely the best bike I've ever ridden,"  said Trek Factory Racing's Fabian Cancellara. "Working on developing the Domane was a huge thing for me and we keep pushing the design further every year. Every time we are getting closer to perfect but we will never stop making this bike better."

Well he would say that wouldn't he. Now you can buy the same bike he races, but chances are you might struggle to make it go as fast...