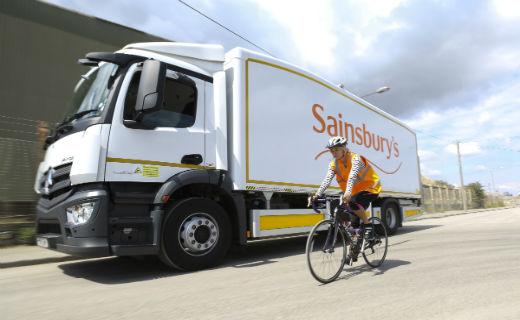 Mayor of London hopes to get rid of dangerous vehicles by next year - but victim's son says roads to unsafe to cycle...
by Simon_MacMichael

Sainsbury’s has unveiled a new lorry that will make deliveries to its outlets in London – and says that the safety of cyclists and pedestrians underpins its design. The vehicle was presented yesterday as Mayor of London Boris Johnson promised to rid the capital of unsafe lorries as soon as next year. But the son of a man killed in a collision with one says that the city’s streets are too dangerous to cycle on.

Lorries were involved in nine of the 14 cyclist fatalities in London last year, and yesterday in partnership with Transport for London and London Councils, the body that represents the city’s boroughs, Mr Johnson launched a consultation into his Safer Lorries Scheme.

The consultation covers proposals to ban lorries without sideguards and safety mirror’s from the capital, and could be introduced early next year. It would apply to vehicles over 3.5 tonnes and operate around the clock, seven days a week, covering the same area as the current Low Emission Zone.

While legislation does currently require many lorries to be fitted with safety equipment, that doesn’t apply to vehicles including construction lorries, tipper trucks, waste vehicles, cement mixers or lorries registered before 2000, something that the changes that are the subject of the consultation, open until 22 September, is aimed at addressing.

Mr Johnson said: "I have long been worried that a large number of cyclist deaths involve a relatively small number of problem lorries which are not fitted with safety equipment.

“My Safer Lorries Scheme would see those lorries effectively banned from our streets and the lives of thousands of cyclists and pedestrians would be much safer as a result.

“Vehicles that would be affected by this scheme can easily be retrofitted to comply and doing so will save lives.”

Sainsbury’s new delivery lorry, which was designed in partnership with Solomon and Mercedes, incorporates features including 360 degree monitors, extra side lighting for road users at night and low side guards for cyclist safety. Seven of the vehicles have been deployed.

The retailer’s retail and operating director, Roger Burnley, said: “We're proud to be here to support the Safer Lorry Scheme today. We've put an enormous amount of thought and research into creating a truck that we hope will be the safest on the road - for all road users.”

Sainsbury’s was not the only company to present a new vehicle aimed at improving the safety of vulnerable road users at yesterday’s event – O’Donovan Waste Disposal displayed a skip lorry that it says has enhanced safety features.

Its managing director, Jacqueline O'Donovan, said: "O'Donovan Waste Disposal operates a fleet of 75 vehicles and has made a substantial investment in vehicle safety enhancements.

“Our drivers and vehicles regularly participate in Exchanging Places run by the Metropolitan Police and TfL, which enables cyclists to experience a HGV driver's view of the road and get a better understanding of their challenges.

“Although a large number of our vehicles were exempt we felt the investment assisted our drivers in making London a safer place for all.  We are doing all we can, through equipment and training, to minimise risk to cyclists and other vulnerable road users.”

Mr Johnson added: “Companies such as Sainsbury's and O'Donovan are already leading the way when it comes to cyclist safety and I urge others to follow suit."

However, the mayor’s record on cycle safety was criticised by the son of a retired GP killed whole cycling in London

Peter Richards, aged 35, told the London Evening Standard that he regularly rode a bike prior to the death of his father last year.

His father, Dr Clive Richards, aged 67, died last August when he fell from his bike on Archway Road, Highgate, and was struck by a lorry’s back wheel.

A coroner’s inquest last week found that while “reduced proximity” between the lorry and the victim caused his death, there was not enough evidence to establish that the vehicle had knocked him from his bike.

“When is it going to stop? It’s harrowing how many accidents there are.

“My message to Boris is if he wants to promote cycling in this city, it’s a wonderful city but for God’s sake, at the moment it is not safe. Do something about it,” he added.