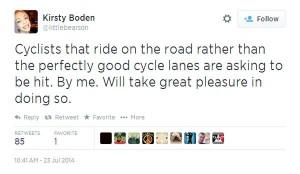 Not more #bloodycyclists: Social media intern slammed for 'asking to be hit' tweet

Kirsty Boden tweeted: “Cyclists that ride on the road rather than the perfectly good cycle lanes are asking to be hit. By me."...
by Sarah Barth

An intern working in social media caused a slew of angry responses and a ticking off from her firm after posting a tweet threatening to run down cyclists who didn’t use cycle lanes.

Kirsty Boden tweeted: “Cyclists that ride on the road rather than the perfectly good cycle lanes are asking to be hit. By me. Will take great pleasure in doing so.”

85 people retweeted it before she took it down and posted “My deepest apologies for what I’ve said as well as to those that have been offended by my comments.”

She made her account private and renamed it, but her firm, White Hat Media, criticised her ‘poor judgement’.

One Twitter user, Shotokancyclist, responded: “You're a disgrace. My brother was hit by a van while he was cycling today. Probably by someone like you.”

Another, Rpb Hayden, said: “Not offended, just shocked at the selfishness and lack of understanding. Have you ever even tried to use a cycle lane?”

White Hat Media told the Brighton and Hove News: “We are aware of a tweet that one of our interns has sent featuring a remark about cyclists that clearly and justifiably offended many people.

“While the content of this tweet or any other tweets sent from the personal social media accounts of our employees are in no way representative of the views of the company or its staff, it is quite clear that this tweet was extremely ill-informed and made with very poor judgement.

“We have requested that the employee in question remove the offending tweet so that the hurt and offence it has caused can be limited as much as possible.

“While we pride ourselves on the work with social media and understanding the many nuances of online etiquette, we appreciate that this has been a severe lapse in the otherwise good online conduct of one of our employees.

“In light of this occurrence, we can assure you all that this matter is being taken with the utmost seriousness that it deserves.

“We would like to make it completely clear that White Hat Media has cyclists among its own staff, including its directors, and does not condone the contents of the message in any way whatsoever and can assure everyone that cyclists are held in very high regard by the company and its employees.”

Last year we reported how Emma Way, the motorist who tweeted about having knocked a cyclist from his bike, was found guilty of failing to stop after an accident and failure to report an accident, but she cleared of a third count relating to careless driving.

Way was fined £300, had her driving licence endorsed with 7 penalty points and had to pay £337 in costs.

Shortly after the incident in Rockland, Norfolk on Sunday 19 May which left cyclist Toby Hockley with minor injuries, Way posted a tweet on the social network that read: “Definitely knocked a cyclist off his bike earlier – I have right of way he doesn't even pay road tax!" together with the hashtag, #bloodycyclists.