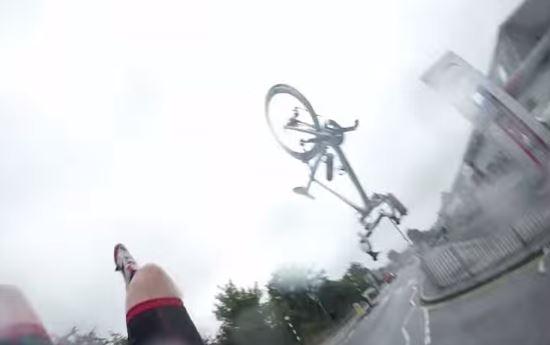 Video: Ninja skills cyclist lands on feet in miracle escape after being hit by car that cuts across him

A cyclist who decided to swap the train for his bike for his commute into London to get fit escaped with nothing more than bruises after a spectacular crash caused by a motorist turning across him, with the episode filmed by his helmet camera.

The incident happened on London Road in Romford, on only the second occasion the rider, who posted the video to YouTube under the user name Cyclejack, decided to ride to work.

The impact sent both the rider and his bike flying – if you’re at work, you may wish to turn the volume down before watching the video with the rider swearing as he realises he can’t avoid hitting the car.

In the video’s description on YouTube, he says: “I was travelling around 22mph through Romford. Drizzly conditions so I was being cautious around bends and roundabouts. I didn't expect this!

“I just about got my hands to the brakes (it can just be seen on the frame before impact) but I had no chance of stopping.

“I'm not quite sure how I wasn't seen. I'm over 6ft and was wearing a bright blue jacket. If I was seen then it's a very bad judgement in my speed.

“After a very uncomfortable trip to the hospital in a neck brace and spinal board and various x-rays I escaped with just bruising. So I consider myself lucky.

“At the time the driver was apologetic and was informed by the police that I was recording my ride and seemed to admit fault. But when it came to my insurance claim against her she disputed it. Safe to say the video has saved me a lot of hassle and 3 weeks later the cheque has already arrived from the insurance company.

“My 4 week old Giant bike was written off but thanks to the guys at Cycle Store they put me one of the two they had left aside and I'm looking forward to getting back out there.”

He adds: “I will say the condition of the cycle lanes are a disgrace along that road, along with many I come across. With the usual obstacles of parked cars, drivers edging out of junctions, pot holes, glass, drains –  why would you cycle in a cycle lane?”