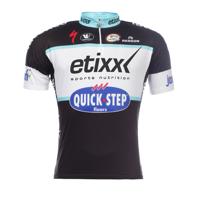 OPQS to change name to Etixx-Quick Step from 2015

Mark Cavendish’s Omega Pharma-Quick Step team will be changing its name from next season to Etixx-Quick Step, after the announcement of a three-year sponsorship deal. The new title sponsor is a brand belonging to the Omega Pharma group.

It’s not the first time that the Belgium-based pharmaceuticals business has used one of its brands in cycling sponsorship.

Previously, when Belgium’s national lottery was co-sponsor, the team went by the names of Davitamon-Lotto and Predictor-Lotto, Predictor being a range of self-diagnostic products including pregnancy testing kits.

Sports nutrition brand Etixx, founded in 2009, has already announced a sponsorship of French Ligue 1 football club Lille Olympique. Although it had a stockmarket flotation earlier this year, Omega Pharma remains its main shareholder, and is now looking to push the brand internationally.

In a press release issued this afternoon, Omega Pharma highlights that in the early stages of Etixx’s development in 2007, the first formulations of the as yet unnamed brand were developed in partnership with the likes of the Astana cycling team.

That’s a curious thing to boast about, perhaps, given that was the year the Kazakh outfit was kicked out of the Tour de France after Alexandre Vinokourov tested positive for an illegal blood transfusion.

One feature of the range that is highlighted by Etixx is “the guarantee that every batch distributed is exempt from doping substances, or traces of doping substances”. That’s perhaps an important consideration given how often athletes claim contaminated supplements as mitigation when accused of doping. Etixx claims this is “unique in the world of sports nutrition.”

The company adds: “This means that Etixx is going far beyond official anti-doping bodies’ regulations and national anti-doping laws: the charter means, among other things, that every batch produced is only released after it has been tested for the presence of banned substances, and that Etixx holds back reference samples after each batch produced for up to two years after their expiry date.”