Racing on the Madison-Genesis professional team, we take a look at Chris Snook's Volare 953 race bike
by David Arthur @davearthur

We were at the Otley Crits evening race before the Tour de France a few weeks ago and caught up with Chris Snook, who juggles the demands of being Press Officer for Madison (the company behind Genesis, Shimano, GoPro etc) and racing with the Madison-Genesis team. 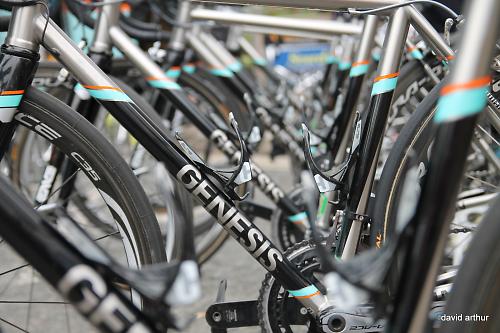 The team have famously brought steel racing bikes back to the professional peloton. With a handful of wins along the way during the past two years, they have proved that metal still has a place in the carbon era. We've been following the development of the frames in that time, and we've even tested the top-end Volare 953, the production version of the frame the team are racing.

The team have been very involved with the development of the Volare from its initial launch, giving feedback to the Genesis designers to hep hone the product for the demands of racing. They're now racing the 5th iteration of the Reynolds 953 tubed bike. Right before Chris was about to hit the race circuit, we had a nose around his bike and asked him a few questions.

road.cc: You've been racing a steel frame for the past two seasons. How has that been working out?

Chris: When I got into cycling on the road it was all about carbon fibre, so this was my first experience of a steel road bike and I was quite excited to see how it would compare.

It’s been good to be involved from the start as we have progressed the bike massively from its first incarnation two years ago. I’ve learned a lot about the properties of steel and about different aspects of frame building and what impact different tube shapes and wall thicknesses can add to the ride characteristics of a steel frame.  What we have now is a proper race bike that handles brilliantly. Do you think there is space for a steel frame in road racing? There is a weight and stiffness penalty?

Clearly yes. We’ve had a lot of success in racing with this bike.  This season in particular has seen victories in the Pearl Izumi Tour Series, London Nocturne and Spring Cup Series (formerly Premier Calendar) as well as podium in UCI one day and stage races including the Ras (where Alex Peters finished second overall and took the young riders classification).

There has been no compromise in stiffness. In fact one problem we had with the first prototype was it was overbuilt, so too stiff resulting in a harsh ride.  What we ride now is a slightly slimmed down version. The frame naturally weigh more than a carbon equivalent.  However, when in race trim, the bike are just over 7kg, so pretty close to the limit. 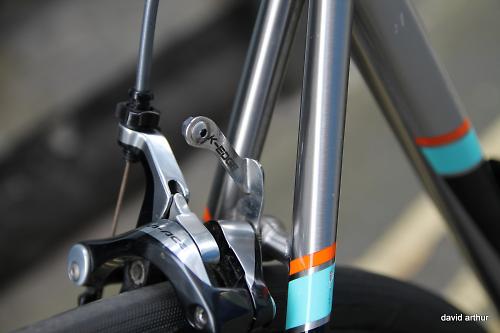 What has changed on this latest (5th) generation frame since it first launched two years ago?

There have been a number of changes to almost all aspects.  The top tube diameter has been paired down and bi-ovalised which provides a bit more compliance at the front end while retaining lateral stiffness for out of the saddle efforts.  The head tube angle has been steepened and the wheel base brought in slightly which is what had helped deliver quicker handling.  The most obvious change however, is the lack of paint on the new models.  The bikes are stainless, so why paint them?  This has shaved 100 grams off the frame weight. Can you sum up the main attributes of its performance?

As said earlier, the new bikes handle really well.  You can have great fun throwing them into tight corners at speed with confidence.  The new bi-ovalised top tube that has been introduced into the new frames has brought in more front end comfort which is great for helping keep you fresh in the saddle.  It’s a rewarding ride. You're known as a sprinter, how does the bike perform in a bunch sprint?

The bikes have stiffness in spades, so it’s a great bike to sprint on.  The XX44 headtube means the front end remains stiff and composed even when pulling hard on the bars. Do you make many changes to the bike for crit or longer road races? For crits with rough surfaces, or with cobbles, I’ll run my tyre pressures slightly lower (around 100psi) to try and keep the tyre in contact with the road surface and prevent it from bouncing and skipping too much.

Here's the full specification of his bike Thanks to Chris for his time. You can learn more about the team at www.madisongenesis.co.uk