Frenchman Tony Gallopin (Lotto-Belisol) rode himself into the the overall of the Tour de France on yesterday’s 161.5km 9th stage which means as well as starting today’s stage in the yellow jersey, he’ll be riding a specially prepared yellow Ridley Helium SL. This is something that has become such a tradition that we'd be suprised if a manufacturer didn't present a classification leading rider with a specially painted bike. 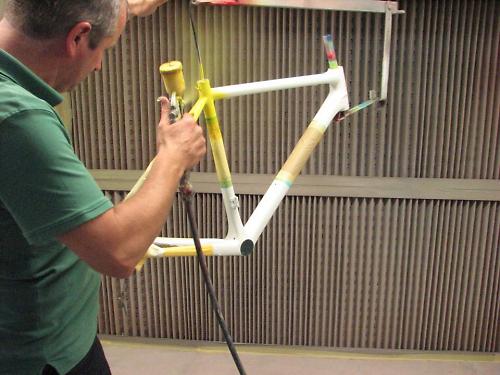 You’d think the manufacturers would be prepared with a fleet of specially painted frames just in case one of their riders moved slipped on one of the classification jerseys, but can you imagine how many sizes they might need if they took that approach? For sure they'll have some frames already painted up for the nailed on favourites, especially a manufacturer that isn't based just over the border like Belgian company Ridley are. 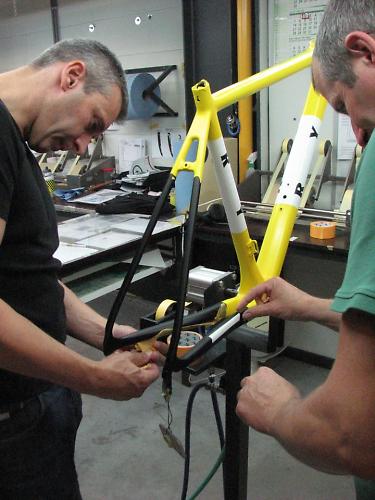 In Gallopin’s case it looks like Lotto-Belisol sponsor Ridley Bikes had to rush together a frame overnight, which they've documented on their Facebook page. 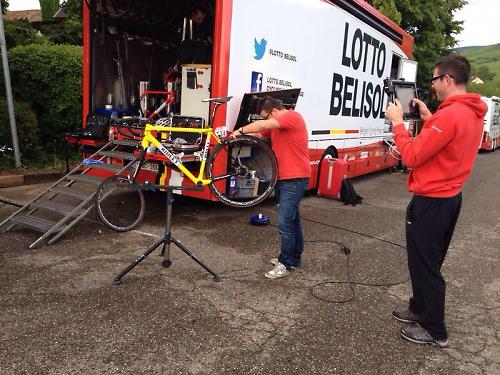 We’ll assume they were in the paint shop the minute Gallopin’s position at the top of the general classification was confirmed with a bare frame and a tin of yellow paint. Then it would be a case of allowing time for the paint to dry, decals applied and then the task of driving it from Ridley's base in Belgium to the start of today's stage, with enough time for the mechanics to build it into a complete bike. It must have been reasonably tight.

Ridley have kept with the retro-inspired design that they announced just before the Tour started in Yorkshire, but replaced the red with yellow. A simple Ridley logo is encased in white bands on the down tube and seat tube, with a black rear triangle and matching fork, gives a nice simple aesthetic. Gallopin chooses the lighter and stiffer Helium SL over the aero Noah Fast, which is probably a sensible choice for the hilly profile of stage 11, though it’s widely expected that he’ll be handing over the jersey to someone else at the end of the stage.

The bike is built up with a Campagnolo Record EPS groupset with Bora 35 wheels and Deda bars, stem and seatpost. SRM have supplied a yellow Powermeter head unit to match the frame.

You can see all the bikes of the Tour de France here.