This is the Scott Foil ridden by IAM Cycling’s Sylvain Chavanel in this year’s Tour de France.

Chavanel, 35, switched from Omega Pharma/Quick-Step to the Swiss Pro Continental team IAM Cycling at the end of last season and his new team got a wild card entry into this year’s Tour.

The Foil is the aero road bike in Scott’s range, as opposed to the Addict which is built primarily with light weight in mind. The IAM Cycling riders, like the Orica GreenEdge riders, can select which of the two bikes they prefer, depending on the stage. Many of the frame elements feature what Scott call their F01 Technology. 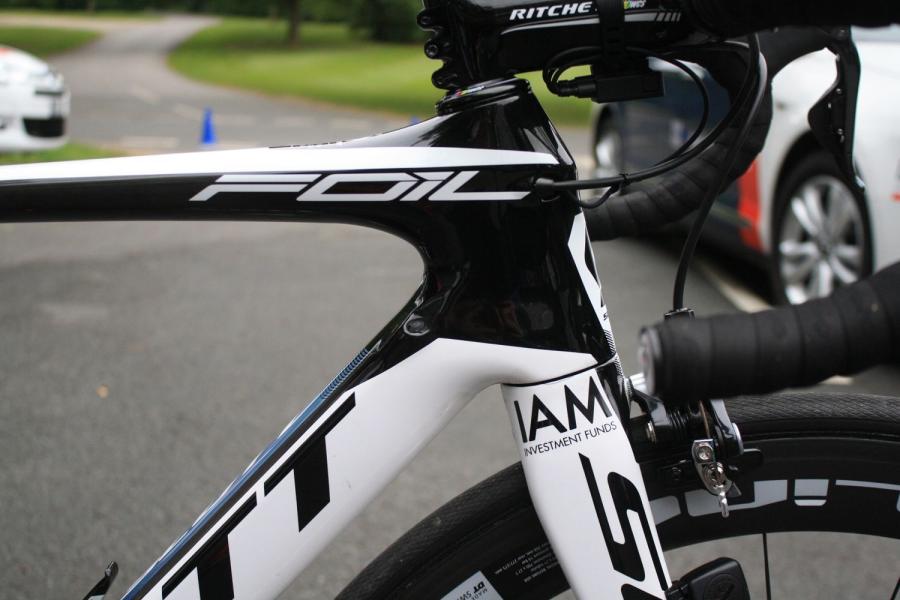 “F01 Technology is based on the theory that a partial airfoil shape without the trailing edge can produce the same aerodynamic advantage as a traditional foil shape,” say Scott.

“Modern foil shapes are largely based on models and ratios created for airplanes by the National Advisory Committee for Aeronautics (NACA), but because bicycles attain speeds far less than those of airplanes, these ratios do not necessarily apply to bikes. Scott Aero Science engineers have thus developed F01 Technology to create unique, bicycle specific tube shapes which maximize aerodynamic efficiency at lower air speeds.”

That’s the theory. You can see this shaping most clearly in the profile of the down tube. The tube profile has an aero-shaped leading edge but things end abruptly with a squared off trailing edge. Scott reckon that you get the same aero performance as if the tube profile trailed off gradually, but the lopped off rear uses less material, leading to lighter weight. It also means the Foil complies to UCI rules which say that the depth:width ratio of the tube can’t exceed 3:1.

You can see similar principles at work in the seat tube and seatstays. 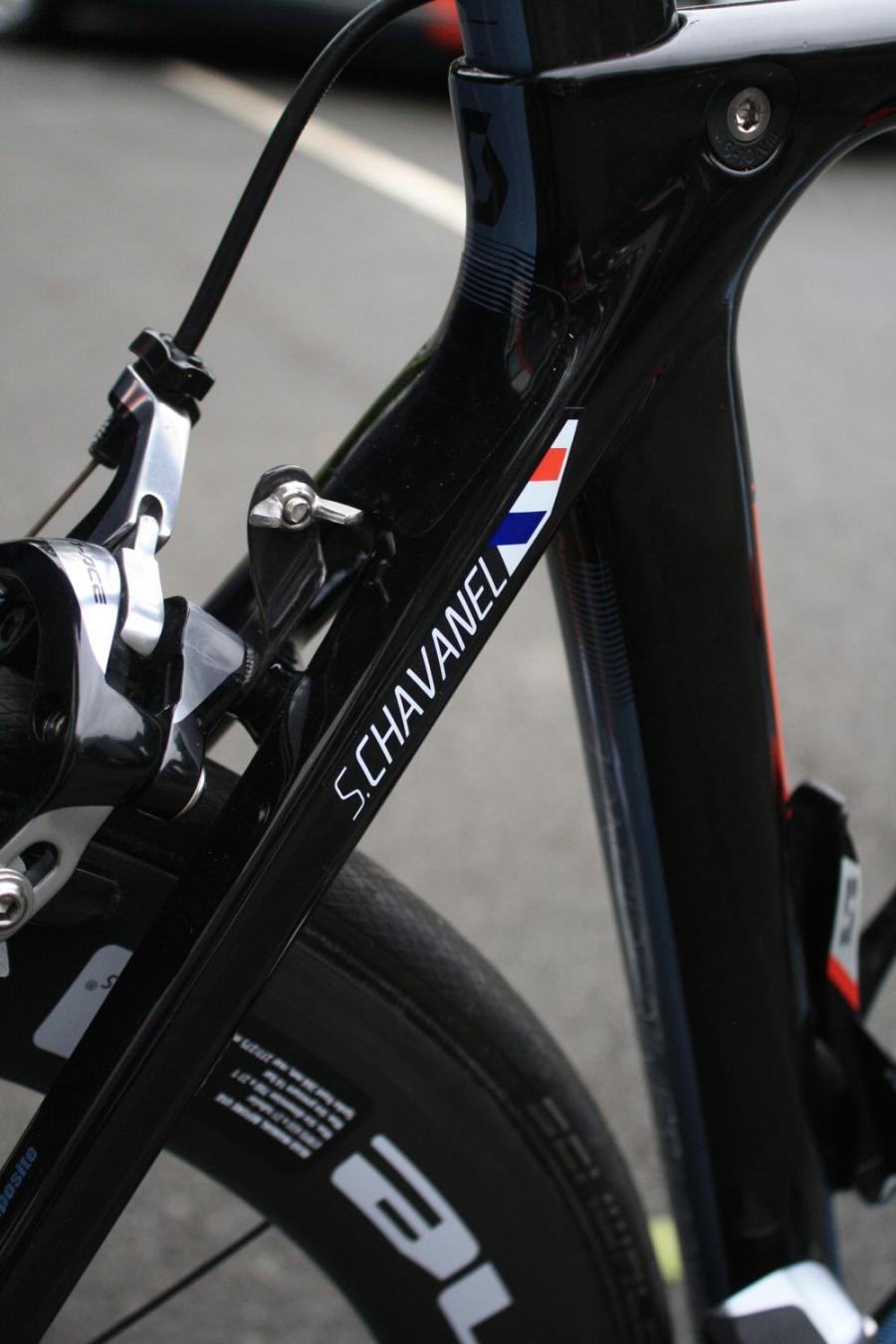 “Every tube in the frame is oriented in relation to the leading edges of the down tube and head tube, as these are the first points of contact for any wind influence,” according to Scott. “The rear stays are oriented 4° from the seat tube plane to route air from the front triangle around the rear triangle cleanly, and are constructed with a carbon layup that additionally results in vertical compliance.”

Speaking of the carbon, Scott say that they use their HMX carbon fibre in key areas of this frame to add more rigidity where that’s needed, and to reduce weight. They also say that they use a process called IMP to save more weight.

“Our proprietary process allows for lighter construction by removing 11% of the material from the head tube intersection while increasing strength by utilizing high modulus stressed fibres for more precise fibre placement in critical areas,” say Scott. “To complement the IMP process, our frames benefit from our Naked External Tubeset, which eliminates the cosmetic carbon layer to shave precious grams.” 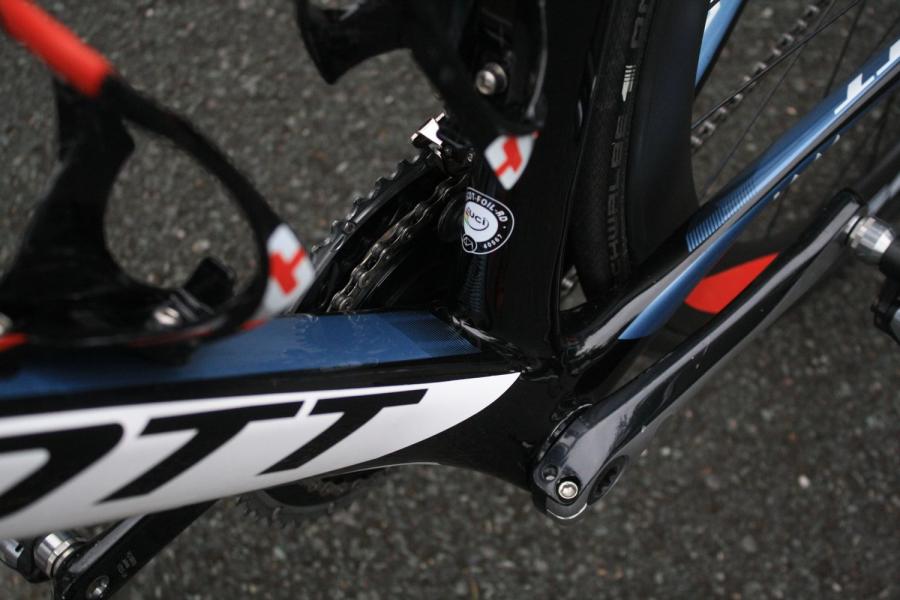 Like most other bikes in the pro peloton, the Foil has an oversized bottom bracket area, the idea being to add stiffness without the need to increase the thickness of the tube walls. Scott also say that their bottom bracket design disperses loads to halve the stress at this junction, and that the shape of the down tube and bottom bracket flowing into the chainstays reduces turbulence and drag.

The Foil also features an integrated seat clamp – a wedge-type design with the bolt sitting within the top tube for improved aerodynamics (and a cleaner look). 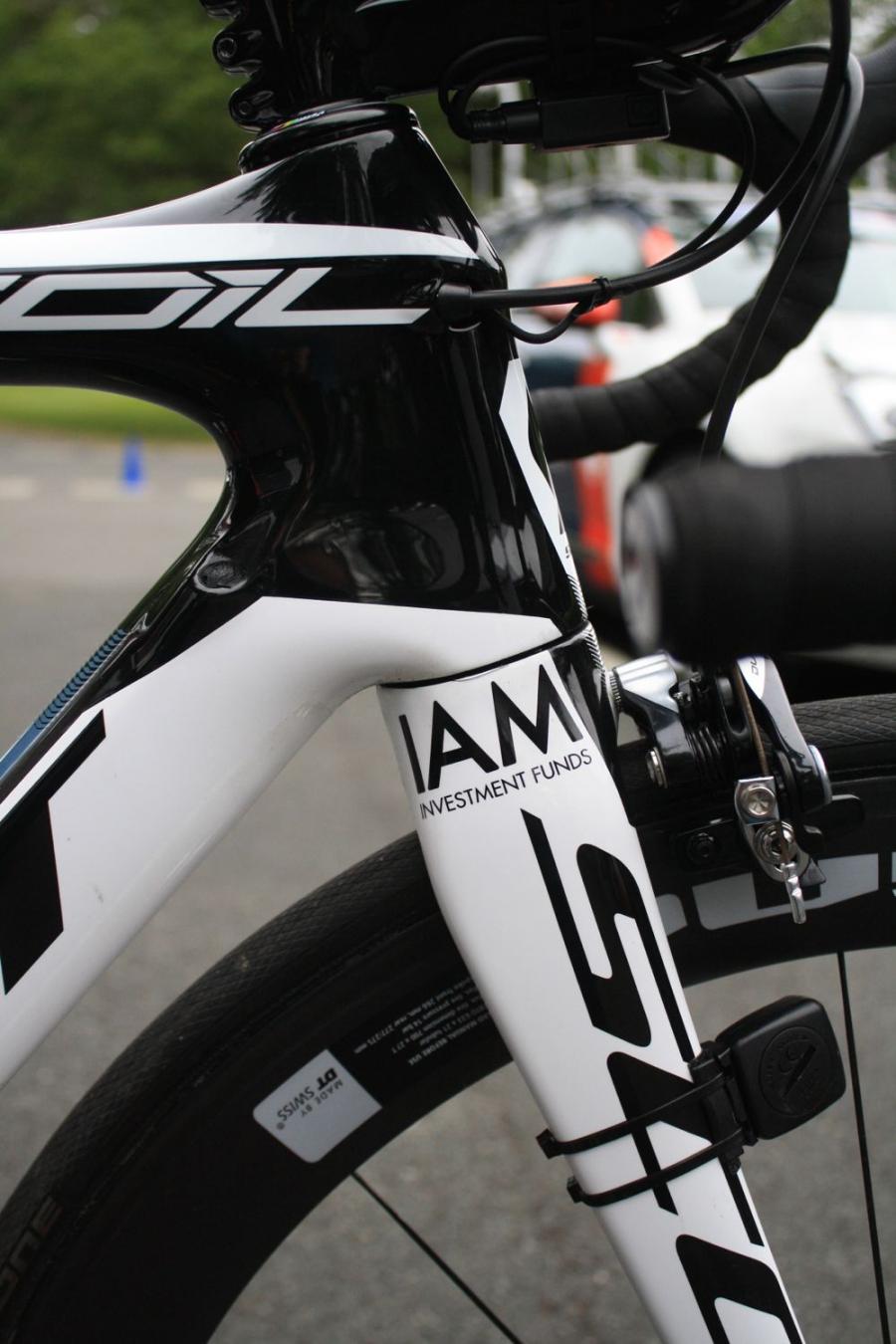 The fork that plugs in up front is the Foil’s own, again made using Scott’s HMX carbon. It has a tapered carbon steerer (1 1/8in to 1 1/4in) and carbon dropouts. 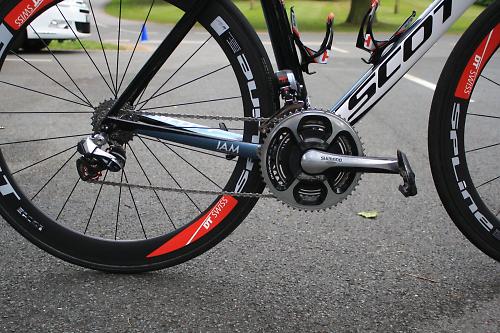 Team IAM use Shimano Dura-Ace Di2 groupsets so there’s no need to use the cable ports at the top of the down tube – the wires go in through the head tube. The redundant holes have been filled with something like silicone sealant. 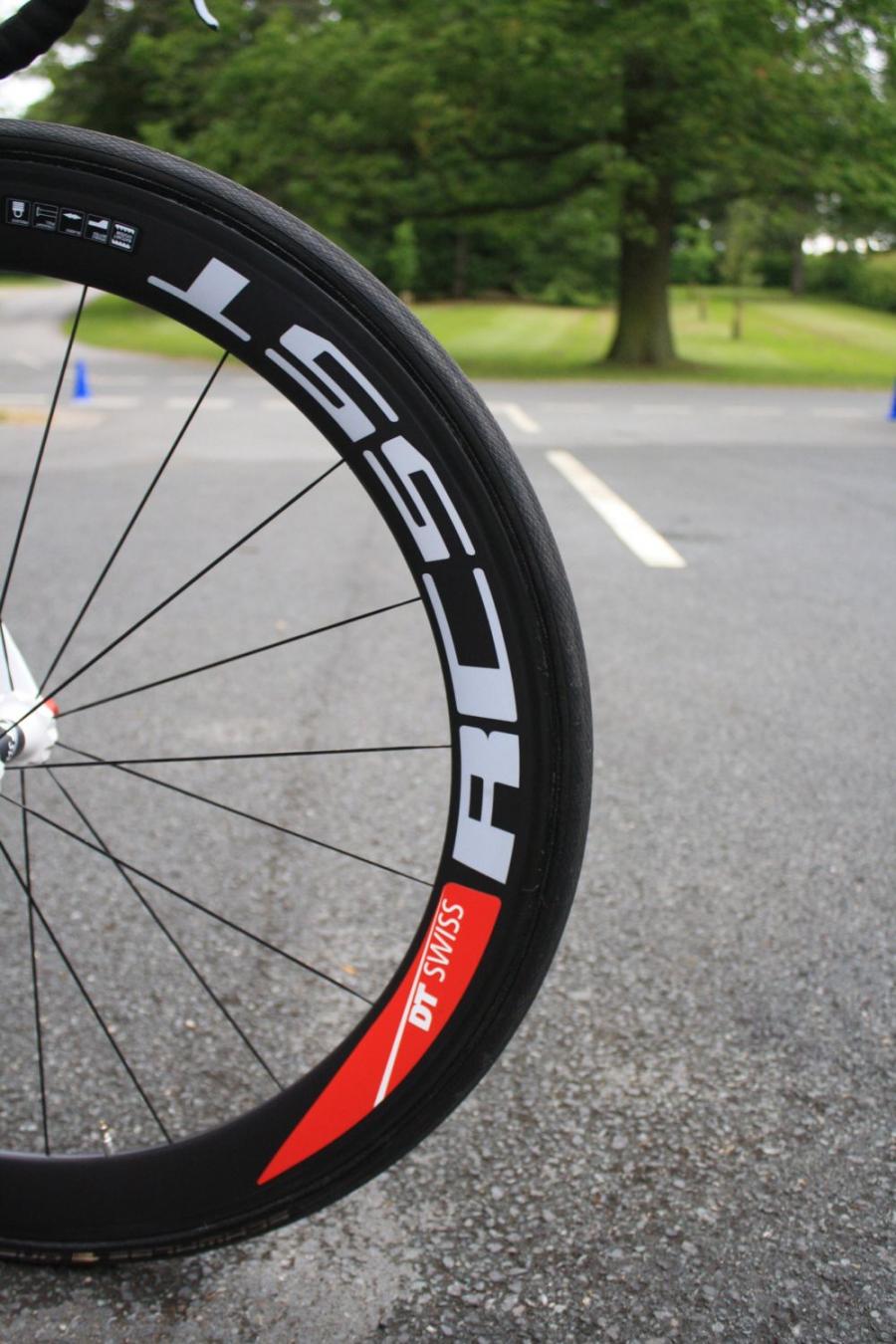 This bike is set up with DT Swiss RC 55 T wheels. The R refers to road, the C refers to carbon, the 55 is the rim depth in millimetres and the T denotes tubular. The rims are carbon and the rear hub uses the DT Swiss ratchet system freewheel. DT Swiss give weights of 615g (f) and 825g (r). Those are Schwalbe One tyres on there. 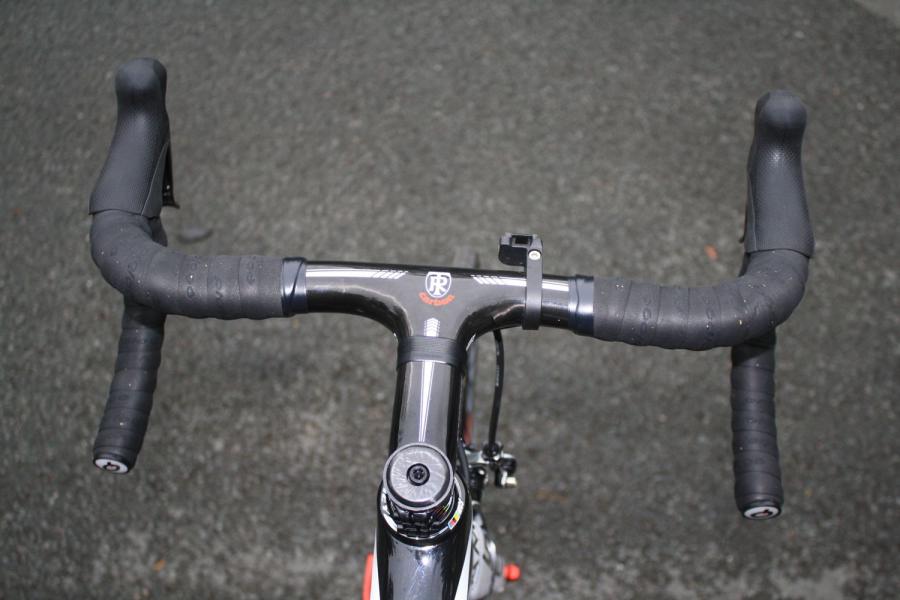 Chavanel uses a Ritchey WCS Carbon Monocurve integrated bar/stem. Essentially, this is Ritchey’s EvoCurve bar moulded directly on to a carbon stem that has a forged alloy steerer tube clamp. The top section is designed to be ergonomic with a bit of a sweep (4°, if you’re interested). 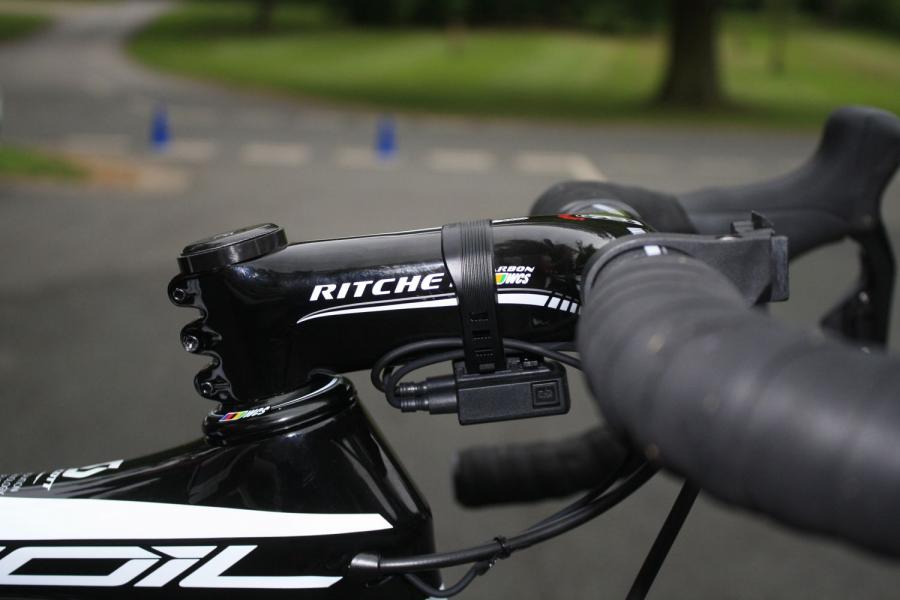 Looking from the side, you can see that the bar/stem offers an aggressive position – it’s an 86° angle from the steerer tube – especially if, like Chavanel, you slam the stem right down on top of the headset. The WCS Carbon Monocurve bar/stem combo might make for a clean look but it’s actually just a touch heavier than a separate bar and stem (although, for all we know, it might have better aerodynamics). 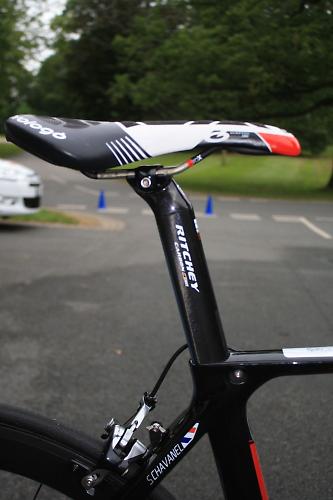 Ritchey provide the Foil aero WCS carbon seatpost too and Chavanel uses a saddle from Prologo. 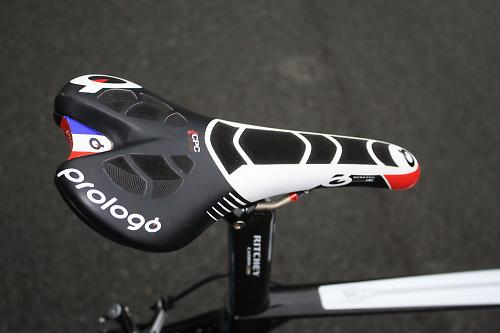 That’s a Scratch Pro with titanium Tirox rails and a microfibre/CPC cover. The CPC is designed to improve grip, reduce vibration and help with cooling. Each rider has his nationality’s flag on the wedge section at the rear, in Chavanel’s case the French tricolor.

To finish things off, Prologo also supply the bar tape and those are Elite Cannibal bottle cages.