This is the Scott Addict belonging to Simon Yates who was drafted into the Orica-GreenEdge Tour de France squad last week as a late replacement for Daryl Impey.

Yates is one of only three Britons remaining in this year’s race, Mark Cavendish having crashed out on Stage One. The other two are Team Sky’s Chris Froome and Geraint Thomas. We've already covered Mark Cavendish's Tour special Specialized Venge as crashed by him on stage 1 and Chris Froome's Pinarello Dogma F8 as crashed by him on stage 5… so fingers crossed for Simon then. 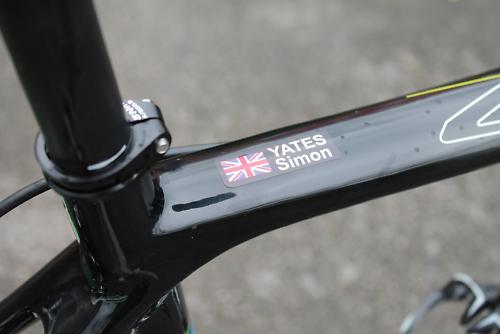 Yates, 21, finished third in the 2013 Tour of Britain and joined Orica-GreenEdge this season along with his twin brother Adam. 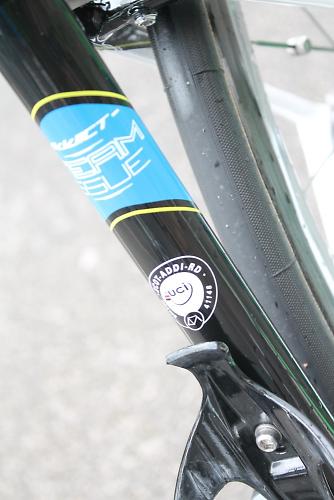 The bike is built around a Scott Addict Team Issue HMX Carbon frame – HMX being a fibre produced exclusively for Scott. The Foil is Scott’s full-on aero road bike while the Addict just incorporates a small amount of Scott’s F01 features. F01 Technology is based on the idea that a partial airfoil shape, without the trailing edge, can produce the same aerodynamic advantage as a traditional airfoil shape while being lighter, less prone to getting caught by crosswinds, and within the UCI’s equipment rules. 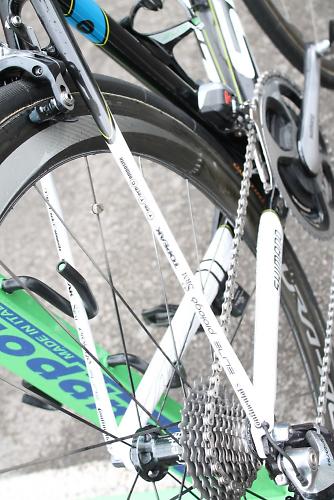 The Addict has an IMP carbon mainframe. What does that mean?

“Our proprietary process allows for lighter construction by removing 11% of the material from the headtube intersection while increasing strength by utilizing high modulus stressed fibers for more precise fiber placement in critical areas,” say Scott. “To complement the IMP process, our frames benefit from our Naked External Tubeset, which eliminates the cosmetic carbon layer to shave precious grams.” 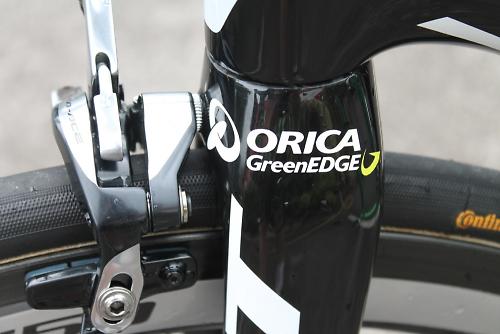 Like the vast majority of high-performance frames these days, the Addict comes with an oversized bottom bracket and a tapered head tube – 1 1/8in at the top, 1 1/4in at the bottom. An Addict HMX fork is plugged in at the front with a carbon steerer tube and integrated carbon dropouts. 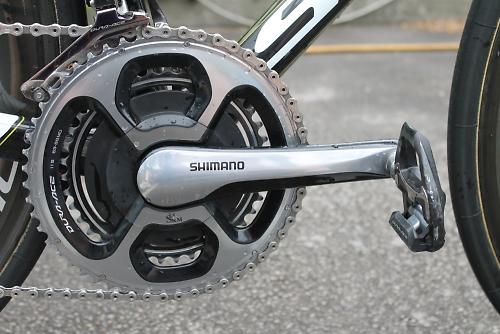 Orica-GreenEdge are sponsored by Shimano and Yates’ bike comes fitted with a full Dura-Ace Di2 groupset. The chainset features an SRM powermeter and 53/39-tooth chainrings. 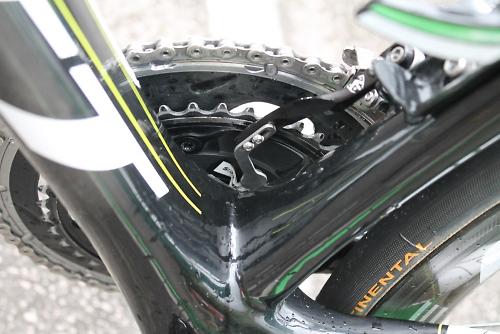 The Orica-GreenEdge bikes are fitted with K-Edge chain catchers, but their ones are a little different from most in that each one incorporates a magnet for the SRM powermeter down at the bottom. 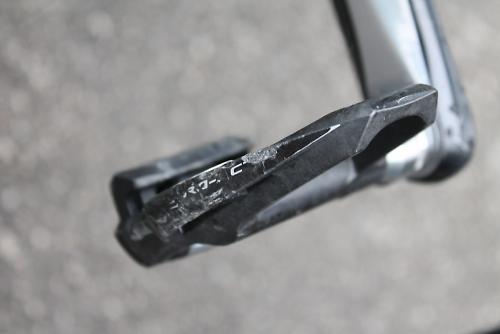 The Dura-Ace pedals look like they’ve seen plenty of action and maybe a stack or two. Yates actually came off hard in the Tour of Turkey earlier this year when his chain snapped, and suffered a broken collarbone as a result. He had surgery to fix it.

The wheels are Dura-Ace C50s, the 50 referring to the wheel depth in millimetres. Wheels of this depth have become so common in the peloton over the past few years that they’re no longer ‘deep-section wheels’ they’re just ‘wheels’. The rims are made from high-modulus carbon, these being the tubular version. 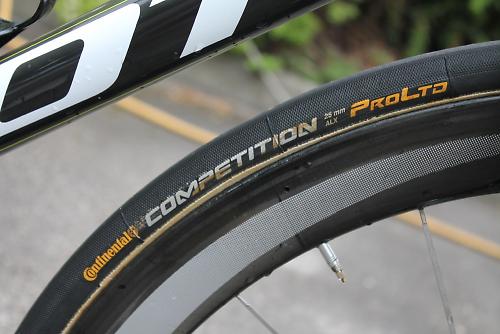 The tubs on there are handmade Continental Competition Pro Ltd with a layer of cut-resistant Vectran under the tread to help avoid punctures. They’re 25mm tyres, that size having become the default option for pros over the past couple of years. 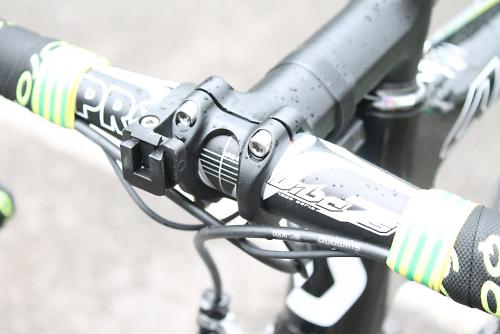 Yates uses a Pro Vibe 7S handlebar made from 7050 aluminium, oversized at the top for extra rigidity. It looks like he goes for the round version rather than either the anatomic or compact model.

The stem is without graphics so maybe it’s not from Pro. Whatever it is, it comes with a negative rise (really, that should be called a ‘decline’, shouldn’t it?). It’s not crazy-long by pro cyclists’ standards – about 120mm – but then, Yates is pretty small (1.72m tall and 58kg). He has just a 2mm spacer between the stem and the headset. 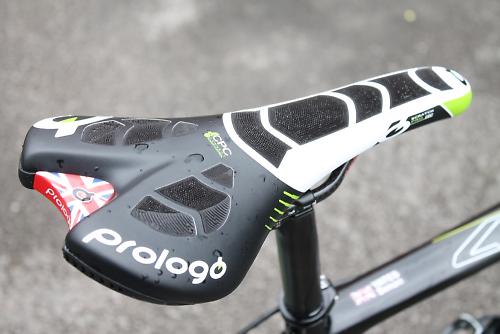 Prologo provide the saddle. It’s a Scratch Pro CPC Nack with a carbon-fibre injection base, carbon-fibre rails and a microfibre cover. The textured areas are the CPC which is a material that’s designed to provide grip, vibration and shock absorption, and cooling. Every team member has his own nationality’s flag at the back there, hence the Union Jack on Yates’ saddle.

Prologo supply the bar tape too while that sticky tape used at the end is simply electrical insulation tape; yellow and green just happen to be Orica-GreenEdge colours.