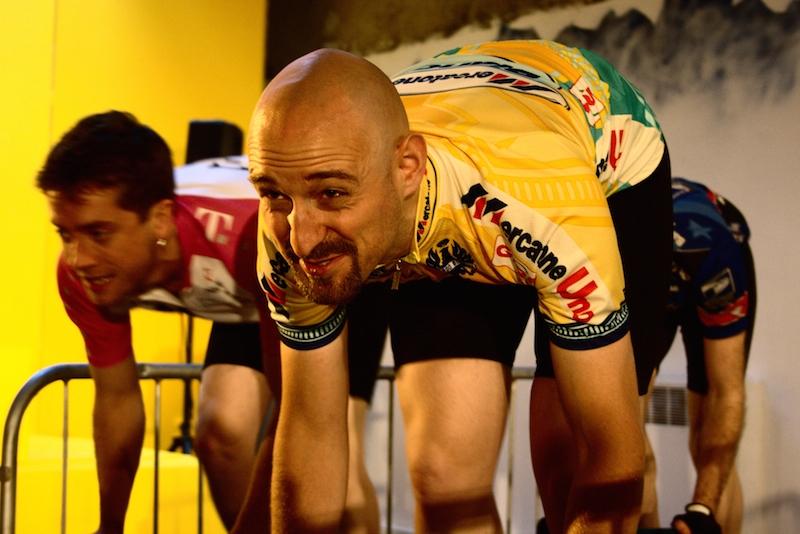 Also, Yorkshire gets ready to welcome race with peal of bells, and Bernard Hinault heads for Otley
by Simon_MacMichael

With just ten days to go until the 101st edition of the Tour de France starts in Leeds, here's our latest round-up of the news as the world's biggest annual sporting event prepares to head to Yorkshire.

Plays about some very different cyclists will be performed in Yorkshire to coincide with the Grand Départ.
One is an outdoor production of Theatre Delicatessen’s 2009 production, Pedal Pusher, which focuses on the late Marco Pantani as well as Jan Ullrich and Lance Armstrong – unsurprisingly, it’s been reworked in light of the latter’s subsequent fall from grace.

It forms part of Sheffield’s Changing Gears Festival, which runs from Tuesday 1 to Sunday 6 July, 2014 at the city’s Furnace Park, and you can find more details here.

Meanwhile, from 30 June to 19 July, the West Yorkshire Playhouse in Leeds will host Beryl, Maxine Peake’s play about multiple world champion and Yorkshire native Beryl Burton, first performed on BBC Radio 4 and coming to the stage for the first time.

The opening night will see British Cycling hosting a panel discussion on the subject ‘How much has been achieved since Beryl Burton and what still needs to be achieved for women in sport?’ with guests including former world champion and Olympic silver medallist Emma Pooley and Burton’s daughter Denise, herself the winner of a bronze world championship medal.

Pooley said: “It should be a fantastic night. When you look back at the achievements of Beryl she really did lead an incredible life. Had she been riding today hers would be a name that millions of people across the country would know. To be a seven-time world champion in any sport is an incredible achievement.

“It is a fantastic way to celebrate her life and recognise just what an inspiration she was to so many and the panel offers a great chance to discuss her legacy, how far women’s cycling has come and how far we still have to go.”

More information on the show and the panel discussion, including how to book tickets, is available here.

Bells to ring out across Yorkshire to welcome the Tour

People all over Yorkshire are being urged to join dozens of churches across the region ring a bell for two minutes just after 8.30pm next Thursday 3 July to coincide with the start of the Tour de France team presentation at the Leeds Arena, reports the York Press.

Martin Green, who is producing what has been billed as the glitziest such event in the race’s 111-year history, said: “This is a groundbreaking event for the Tour de France - never before in the history of the race have they seen an opening ceremony like this and encouraging bells across our county to ring out together on the evening of July 3 truly will be the signal for the whole of the county to welcome the world.”

Any type of bell is welcome – including ones on bicycles.

Stars of two of television’s longest running soaps – Coronation Street and Emmerdale – will next week take part in a charity bike ride for the Tour de ITV, starting and finishing at the two shows’ respective pubs, the Rovers Return and the Woolpack.

The 60-mile ride from the Corrie set at Salford’s Media City to the Emmerdale set at Harewood, which aims to raise funds for Marie Curie Cancer Care, will cross the Pennines and take in some of the Tour de France route, reports the Manchester Evening News.

It adds that among those taking part will be Gaynor Faye, who played the role of Judy Mallett in Coronation Street from 1995 to 1999 and now appears in Emmerdale as Megan Mace.

Anyone thinking of gatecrashing the podium at next Wednesday’s Otley Cycle Races may wish to think twice – the prizes are due to be presented by five-time yellow jersey winner Bernard Hinault, who looks after the post-stage ceremonies at the Tour de France and is known for his uncompromising approach to any unauthorised person straying onto his turf.

Hinault, who will also act as official starter to the evening’s main race, is attending with Tour de France race director Christian Prudhomme, and coming just three days ahead of the Grand Départ, a bumper crowd is expected, reports the Ilkley Gazette.

Giles Pidcock, director of the Otley Cycle races, said: “Last year the crowd was estimated at 16,000, our biggest yet, and we expect to top that this time. The event grows in popularity each year and in some ways it is a huge street carnival with a cycle race going on.”

The National Farmers’ Union (NFU) has teamed up with Massey Ferguson and satellite broadband business Avonline to ensure fans enjoying the Tour de France in the Yorkshire countryside can stay connected to the outside world by enjoying free Wi-Fi on the opening two days of the race.

Two tractors have been equipped with satellite dishes that will turn them into WiFi hubs with a range of 500 metres. They will be at the Yorkshire Dales National Park Visitor Centres in Hawes and  Grassington, on Stage 1, and at the Steel Stage event at High Bradfield near Sheffield and Holme village at the foot of Holme Moss on Stage 2.

NFU regional director Richard Pearson said: “Farmers across Yorkshire are gearing up to welcome tens of thousands of people for the Tour, showcasing the fabulous food and scenery for which the county is famous.

“But as our members know only too well, getting internet access can be a tricky business out in the countryside – it’s something they grapple with every day whether they’re registering online animal movements or simply engaging with the public on Twitter or Facebook.

“It’s obvious spectators will want to use their phones to access visitor information and post pictures, tweets and so on. As we understand how frustrating a lack of broadband in rural areas can be, we wondered if this was something we could help with.”

The NFU has also produced a video to tie in with the race showing the diversity of the activities undertaken by its members in Yorkshire.