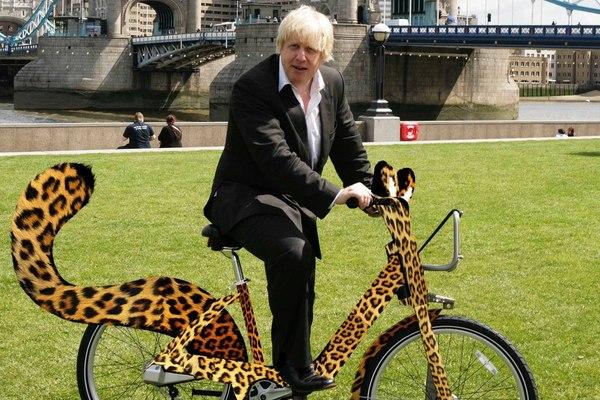 Transport for London (TfL) has formally announced that it is looking for a new sponsor for the city’s cycle hire scheme, and one rather unusual contender has stepped up to the plate.

Despite having only raised £509 of the required £37,500,000 minimum needed for the sponsorship operation, TellTails, a small, independent toymaker based in, Hackney Wick, East London, is confident that local backing on a crowdfunding website could mean Boris bikes being changed from ‘bland and boring’ to ‘irreverent, exuberant and rebellious’ - with the addition of an animal print paint job and massive, realistic, billowing tail.

According to TfL, potential sponsors must be prepared to spend a minimum of £5.5 million a year over a seven-year period starting in 2015.

The deal would give the successful bidder naming rights to the scheme, as well as branding on more than hire 10,000 bikes and choosing the scheme colour which would be incorporated on its roundel - in this case it could be one of multiple jungle creatures.

TellTails said: “We believe in a London bike sponsored by the people, for the people.

“No longer will Londoners arrive to work on a two wheeled turd or a  navy blue nightmare.

“The Boris beast, complete with new animal print paint job and massive, realistic, billowing tail means that you can now ride to work on a Steed! a Stallion!

“You sir, can arrive to work on your very own BATTLE CAT!’

“Not only does the Boris Beast pose an excellent answer to adding some jazz to this pedal powered porkchop, but the newly added tail acts as a superior mud guard, enveloping the rider in its furry clutch and protecting them from the mean streets of London.”
Indiegogo funders can enjoy a range of rewards for backing the fledgling bid, including, for £5, a badge depicting Boris Johnson astride a cheetah Boris Beast, or for £10,000, an invitation to the founders’ home in Spain for Christmas and the opportunity to carve the turkey.

Mayor of London, Boris Johnson, said: “With more than 30 million hires since its launch there can be no doubt that our trusty bicycles have changed the way people get around our great city.

“This is a unique opportunity for a commercial partner to put their stamp on a mode of London transport that is now as recognisable as our iconic black cabs and red buses.

“We are looking for a sponsor whose aspiration matches our own, one with the passion to take the scheme to the next level and get even more people pedalling.”

A formal tender document setting out the full range of rights on offer will be published online at www.tfl.gov.uk/cyclehiresponsorship on 8 July, and expressions of interest are being invited now by email to londoncyclehire2015 [at] tfl.gov.uk.