Specialized are set to launch a new model called the Diverge next month which appears to be a multi-surface bike with disc brakes and Zertz viscoelastic inserts.

Although Specialized are keeping schtum, pictures of the Diverge have been shared on Twitter and Instagram, presumably with the company’s approval in a teaser campaign.

The bike will be officially launched on 15 July, the first rest day of the Tour de France. What can we learn from the pictures?

Well, the Diverge appears to be a carbon-fibre bike (an alloy version could be available too, for all we know, but all the bikes in the pictures seem to be carbon-fibre) designed for both tarmac and gravel. It comes with disc brakes and thru-axles (as opposed to standard quick releases) to provide extra stiffness and more security against the forces of those discs, and it’s compatible with Di2 electronic shifting.

The slick tyres are large (well over 30mm) and there looks to be plenty of clearance. There appear to be mudguard mounts too.

Specialized use Zertz inserts in the seatstays and fork, designed to provide vibration damping. These are a long-standing feature of Specialized’s Roubaix endurance road bike, although the size and location of the Zertz has varied slightly over the years. 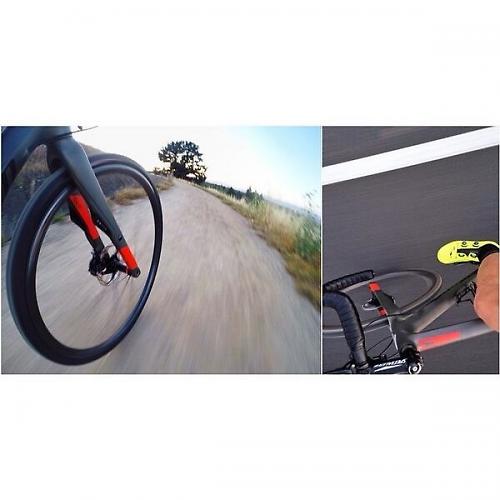 Beyond that, things get a little hazy. At least some of the bikes pictured appear to have a dropper seatpost fitted although whether than will be a standard feature, who knows?

The top tube profile appears to be slim and the same goes for the chainstays – features usually associated with bikes designed for comfort.

According to bike adventure outfit Deux North ahead of a ride with the Diverge last week, “On June 4th, 9 [riders] meet in San Jose [California]. Coming from New York, Vienna, Tucscon, and California, together we'll make up the largest group that Deux North has ever put together. “Over the following three days, we'll ride from Specialized's HQ in Morgan Hill together to Santa Cruz where we'll compete in the King Ridge Hopper Adventure Series on the final day. The route includes nearly 30% dirt roads and travels across some of the most beautiful landscapes this country can offer.”

That should give you some indication of the type of bike we’re talking about. We don’t know whether Specialized are going to bill up the Diverge as a gravel bike, or opt for something like ‘all-road’ bike for greater appeal. 1
Near Miss of the Day 433: Police tell cyclist “We all have to share the road” after very close pass from lorry driver
2
“No excuse” – councillor slams motorists who drove on pavement to get round road closure as emergency infrastructure ignored in London and beyond
3
Near Miss of the Day 430: Close pass ... from a police officer
4
Boardman Bikes release 2021 road bikes and tease at new urban and hybrid models.
5
Questions over Government’s commitment to active travel after "best and final offer" to repair Queensbury Tunnel
6
Some police forces treating close passes of cyclists as a "victimless crime"
7
Southampton MP complains of City Council "taking out lanes" – says pop-up cycle lanes worsen congestion
8
Fire service called out for DIY e-bike fire