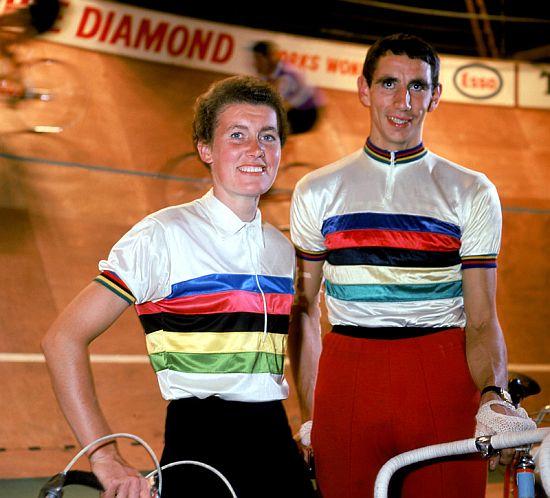 British Cycling has announced the 50 cycling heroes who will be the first inductees to its Hall of Fame, set up to celebrate the governing body’s 50th anniversary.

Nominations included not just stars of the road and track, but also coaches, team managers, sport administrators and volunteers, as well as public figures who have helped raise cycling’s profile.

The panel unanimously chose to recognise names who have figured over the last five decades of the nation’s cycling heritage, so there’s no room for the likes of Sir Chris Hoy, Bradley Wiggins or Dave Brailsford, although they will doubtless get their chance as the Hall of Fame expands in the coming years.

Victoria Pendleton said: “We made a conscious decision not to select elite riders who are still competing at an international level or coaches and managers at the top of their game. We also agreed we should recognise administrators and volunteers who have been active in the sport over many years and have made a significant contribution to it during that time. There have also been several posthumous awards.”

British Cycling’s President, Brian Cookson, added: “The response we’ve had from the public for the Hall of Fame has been phenomenal and choosing just 50 individuals out of over a hundred proved very challenging. With such a fantastic number of nominations this year we have decided to make the Hall of Fame an annual event to enable us to recognise more recent and current cycling successes.”

The official induction of the 50 “cycling heroes into the British Cycling Hall of Fame will officially take place at British Cycling’s 50th anniversary Gala Dinner at Manchester Central on 20 February 2010.

The full list of the first 50 inductees into the British Cycling Hall of Fame, in alphabetical order, is:

Pat Adams - no mean cyclist in his day, but best known as the man behind Mountain Mayhem and Sleepless in the Saddle
Caroline Alexander - Queen of British cross country mountain biking in the mid-90s and a serious challenger for the world title on numerous occassions
Brian Annable - President of City of Edinburgh Racing club and more than two decades as secretary of East of Scotland Cycling Association
David Baker - pioneer mountain bike racer
Sid Barras - sprint legend still ripping it up on the rollers
Stuart Benstead - doyenne of road race promotors
Chris Boardman MBE - needs no introduction
Bill Bradley - dominated the British road scene in the late 50s and early 60s
Beryl Burton OBE (pictured) - possibly the greatest British cyclist ever, male or female
Keith Butler - 60s road racer who raced as a pro in Belgium
Arthur Campbell MBE - fiery Scottish cycle campaigner who had the Meadowbank velodrome built
Brian Cossavella - highly respected international race organiser and promotor who died last year
Doug Dailey MBE - British Cycling's logistics manager, himself a former Olympian and National Road Race Champion
Tony Doyle MBE - twice World Pursuit Champion and six-day racer
Ian Emmerson OBE - ex-British Cycling president and cycling author  still involved in event organisation
Malcolm Elliott - top 80s road man still doing it today - Vuelta points jersey winner
Benny Foster OBE - organised 1970 Road World Championships when they came to Leicester
Tim Gould - switched to from road and cross to mountain biking in 1985 and took the sport in the UK to a new level
Eileen Gray CBE - former President of British Cycling who helped women's cycling achieve recognition as an Olympic sport
Dave Hemsley - former World Cycle Speedway Champion
Barry Hoban - 60s and 70s road legend, eight victories gave him the stage wins record for Brits at Le Tour until a certain Manxman took it this year
Dale Holmes - BMX World Champion in 2001
Mandy Jones - Won the Women's World Road Race title in 1982
Peter Keen OBE - the coach who transformed British Cycling
Peter King CBE - the man who brought in the coach that transformed British Cycling and who pulled the organisation back from the brink
Stan Kite - organiser of London-Holyhead and London-Bradford races, and administrator of Professional Cycling Organisation and
Phil Liggett MBE - the voice of cycling for the world
Craig Maclean - track sprint ace
Paul Manning MBE - multiple track World Champion who retired after helping Team GB to gold in team sprint at Beijing
John & Doreen Mallinson - Couple have been involved in sport in North West for half a century
Yvonne McGregor MBE - when Team GB didn't win medals, she did
Gerry McDaid - UCI Commissaire from Scotland
Jason McRoy - downhill mountain biking pioneer, inspired a generation before his tragic early death
Chas Messenger - former rider and BLRC official who organised the Milk Race from 1958 to 1965
George Millar - like Gerry McDais, another Scot to make his mark on the administrative side of the sport at international level
Robert Millar - still the only Brit to win a jersey at the Tour de France, would have won the Vuelta in 1986 if the locals hadn't banded together
Graeme Obree - Superman
Hugh Porter MBE - top pursuiter, and a top commentator too
Jason Queally MBE - gold in Sydney in the kilo sprint
John Rawnsley - organiser of the Three Peaks cyclocross race, and has competed every edition since it started in 1961
Brian Robinson - trailblazing pro from the 50s and 60s who was the first Briton to complete the Tour de France, and the first to win a stage
Alan Rushton - race organiser who brought Tour de France to Britain and Ireland in the 1990s
Tom Simpson - remembered by many for the manner of his death, but he was also one of the best British road riders ever and still our only male road pro World Champ
Eddie Soens - legendary Merseyside coach, "the Bill Shankly of cycling"
Colin Sturgess - 1989 World Pursuit Champion
Dot Tilbury MBE - long-time volunteer at Isle of Man's National Sports Centre which has helped give likes of Mark Cavendish and Peter Kennaugh their start in the sport
Graham Webb (pictured) - 1967 World Amateur Road Race Champion
Les West - one of Britain's top road racers of the 60s and 70s, won the Milk Race twice
Sean Yates - two time wearer of the yellow jersey, all-round road legend and now DS at Team Sky
Tony Yorke OBE - Mastermind of British Paralympic Cycling team's 16 gold medal haul at Beijing