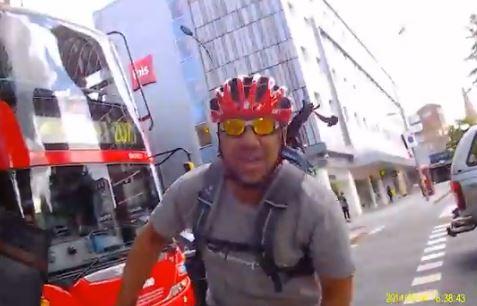 Video: Cyclist appeals for help in identifying rider who crashed into him in West London

Footage of bike-on-bike crash at Shepherd's Bush Green...
by Simon_MacMichael

A London cyclist has appealed for help in identifying another rider who left him nursing bruises after crashing into him at Shepherd’s Bush Green, and has posted footage of the incident to YouTube.

The video shows how the cyclist who came off his bike is riding along an off-road shared use path when the second rider hits him from the side, knocking him off his bike.

The latter says: “That’s your fault, not my fault, you’re on the pavement,” to which the cyclist knocked off his bike says: “It’s a cycle lane – you know it’s a cycle lane.”

“I was coming across there,” says the cyclist who struck him, gesturing at the junction behind him.

The rider responds: “I was looking, you come out.”

As he rides off, the cyclist who ended up on the ground says: “I’ve got right of way because you were crossing. That’s how it goes.”

In the description to the video, YouTube user Man about (London) town says: “I was cycling along the cycle path on Shepherd's Bush Green in west London when this moron crash into me from the left, having shot out blind from behind a bus.

“If you can tell me his name, I'd like to show this video to the police, along with photos of my bruises. The worst thing is, he's still out there cycling like that, and next time it would be a child he hits.”

Was he in the right about the other cyclist having to give way? Well, there are no markings on the shared use path to instruct the rider who filmed the incident to stop.

It does leave a bit of an anomaly in terms of cycle infrastructure design, though – was the cyclist who struck him supposed to wait in the road in front of a bus until the shared use path was clear?