With scintillating acceleration, stability at speed and in the rough, and with the massive confidence offered by hydraulic disc brakes, Storck’s T.I.X. is a hugely capable cyclocross bike and loads of fun to ride. We exclusively brought you a look at the German company’s new cyclo-cross bike, their first ever, last week. You can get all the nitty gritty detail on the technical aspects of the frame in our Just In article. For now let’s talk about how it rides, because that's what really matters.

Fortunately, I was given a few days to ride the pre-production version of the T.I.X. which is currently undergoing testing and development, so while not enough for a conclusive review, a handful of rides is enough to form a first impression. It’s not often you get the chance to ride a bike that is one of only two in existence anywhere in the world. Let’s crack on.

Where to start? Well, the first thing I noticed is how little mass there was to accelerate. With a Shimano Ultegra Di2 groupset with hydraulic disc brakes, DT Swiss R 23 Spline wheelset and Storck’s own finishing kit, the T.I.X. hit the road.cc scales at just 8.03kg (17.66lb). That’s not just light by cyclo-cross standards, it’s light compared to similarly specced road bikes; it puts half a kilo into the Orbea Avant for example. That low weight really imparts swift acceleration and instantaneous changes of pace when out on the trail. It doesn’t take much effort to get it up to speed. It hops and skips along with a fizz of excitement and yet, due to the stiffness of the bike frame and fork, it feels solid and direct with not a hint of deflection when twanging over rocks, ruts and roots.

Point it down a narrow, tree-lined sliver of trail peppered with rocks and roots, and the T.I.X. is sure-footed and stable. It’s precise; you can place it exactly where you want. Yes, it gets bounced around a bit – it’s running skinny cyclo-cross tyres after all – but it doesn’t feel nervous or out of its depth like cyclo-cross bikes so often can when the technicality ramps up.

The Shimano hydraulic disc brakes are a real highlight and key to the T.I.X.’s performance, as they will be to every cyclo-cross bike they’re fitted to in the future. They really are a game-changer for cyclo-cross. Okay so maybe they’re not critical for World Cup racers, though I think there are bound to be certain courses where they’re a benefit, but away from racing and simply riding the local woods and just blatting around having a blast, they’re a huge benefit. How come? Well, the biggest difference I noticed was in my style of riding: not having to brake well in advance of a corner, none of those scary hanging off the brake lever moments desperately trying to reduce your speed, all the while the fork flapping back and forth. The power they provide, with excellent modulation, means you can worry less about braking and effortlessly adjust your speed at a moment's notice. 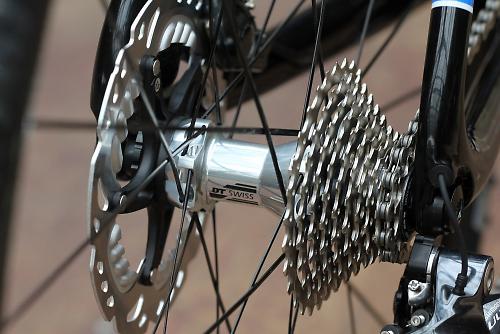 As a result, I found myself able to attack corners and chase through sweeping bends. The realisation that these brakes are just better is when I found myself riding the trails like I would on a mountain bike, with none of the limitations of traditional cyclo-cross bikes in such technical surrounds.

From the Storck road bikes road.cc have tested over the years, one thing is clear, the company takes stiffness to weight ratio very seriously. They claim a sub-kilo weight for this 55cm frame, which is impressive for a cyclo-cross chasis. They have clearly drawn on their road frame design for inspiration because there is something of the Fenomalist in the shape of the main tubes. While it’s clearly oversized in the usual areas, it isn’t overly so. One place where the bike is beefed up is in the fork. It’s substantially oversized with bulbous upper legs and crown. There’s loads of mud and tyre clearance. The legs taper in a straight line down to the bolt-thru front axle. Where the fork excels is in managing to deal with the higher braking forces the hydraulic disc brakes exert on components. The fork didn’t deflect during braking – not even exaggerated, heavy, front-only braking – yet it somehow manages to provide a smooth ride at the same time. Bolt-thru axles have been generating a lot of debate in the past couple of years while we’ve seen the widespread emergence of disc-equipped road bikes. The axles – large diameter hollow axles that thread into an enclosed dropout from the driveside – are tightened with a Torx tool. They’re obviously not as quick to operate as typical bolt-thru axles that feature a fold-out lever, but these save weight, and saving weight is something Storck take seriously.

Cyclo-cross race bikes have had the go-ahead to use disc brakes for a number of years, but because ours is a sport where a large proportion take their lead from the bikes professional cyclists ride, cyclo-cross bikes have been slow to evolve. The T.I.X. is one of the first cyclo-cross bikes to incorporate bolt-thru axles from the design stage; they aren’t simply retrofitted to a standard frame. When we spoke to Markus Storck at Eurobike last year, where he showed his first road bike with bolt-thru axles, he told us the main reason for using bolt-thru axles was the extra stiffness they offered. This means less carbon fibre is needed in the frame, at the fork and rear stays. Because the axle provides more stiffness than a regular setup, the theory is you don’t have to build as much stiffness into the frame. You certainly notice it riding the T.I.X.. You don’t notice the bolt-thru axles as much as you notice the very high level of stiffness that is apparent throughout the frame. The front end feels far stiffer and more direct than any cyclo-cross bike I’ve ever ridden. Even when you’re drifting sideways through a sweeping bend or dropping into a rocky descent, you can sense the massive stiffness throughout the frame keeping everything tracking in the same direction. There’s not a hint of deflection from the frame, fork or wheels. The stiffness is well balanced. That’s to say, it’s properly efficient at transferring your energy into forward motion, yet it doesn’t bounce and jolt you senseless over ruts and rocks. That’s attributable to the huge amount of seatpost extended from the frame – a result of the sloping top tube – and also the Selle Italia SLS Monolink saddle and MLP 150 seatpost that provide noticeable deflection during seated pedalling over bumpy ground.

If you think I sound impressed by the Storck then you’d be right. Perhaps the most important feature I would take away from my time on the T.I.X. is its speed – it’s phenomenally fast. It’s impressively light and the stiffness provides a very direct, sharp handling and communicative bike. And then there are the Shimano hydraulic disc brakes which are simply marvellous. The confidence they provide over traditional cantilever brakes isn’t something I want to understate. They are simply better in every way. You can stop and slow down with less effort, and that means you can ride faster, with more control and safety, and as a consequence have more fun. That is the reason we ride bikes, isn’t it?

Despite my limited time on the T.I.X., it’s abundantly clear Storck have built a phenomenally fast bike. I’m not a fan of the name though, it doesn’t quite roll off the tongue like some names do. But the name hardly matters when there is such a high level of performance on tap.

We’ll hopefully get a proper in-depth test on a production T.I.X. when they’re available in September, right in time for the cyclo-cross season. The first production bikes will be fitted with Shimano mechanical shifting and cable disc brakes and cost £3,199, with Shimano Mechanical / Hydraulic specced bikes costing £3,599 and arriving in December.

In the meantime point your browser at www.storck-bicycle.cc/cyclocross-bikes/tix-2014 for more info.

1
Canyon Ultimate CF Evo 2020 - still silly light but now much cheaper
2
(Not so) Near Miss of the Day 380: Driver deliberately clips cyclist (includes swearing)
3
Sir Dave Brailsford reveals his personal diet and training regime on Strava
4
5 Cool things coming soon from Triban, Prime, Oxford Products, Indik8a and Bioracer
5
Blow to British Cycling as it confirms HSBC UK to end sponsorship four years early
6
Police warn cyclists not to use Taff Trail after dark following spate of robberies
7
Near Miss of the Day 378: What is it about overtakes on straight roads into oncoming traffic?
8
Former Swiss pro leaves the team he founded after admitting involvement in Aderlass doping ring