Team Sky will race aboard the lighter, stiffer Dogma F8 within a fortnight
by Mat Brett

Pinarello have announced the eighth generation of their top-end Dogma road bike which, it won’t surprise you to learn, they say is lighter, stiffer and more aerodynamic than the existing model.

So, let’s get those stats in full. Pinarello say that the Dogma F8 is:

More balanced? We’ll come back to that. 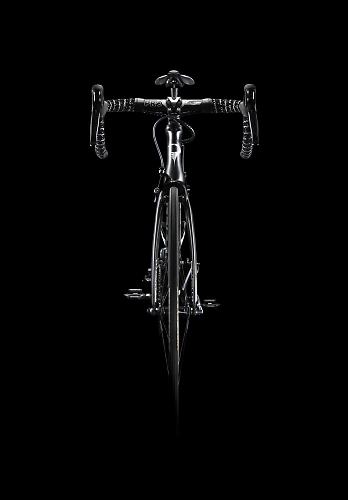 The Dogma F8 is made using ‘new T11001K Dream Carbon with Nanoalloy Technology’ from Toray. Pinarello say that the material’s major feature is its stiffness-to-weight ratio. They claim that whereas a 54cm Dogma 65.1 with Torayca 65HM1K weighs 940g, an equivalent Dogma F8 frame weighs nearly 80g less while retaining the same structural characteristics.

“We have always said that weight is not a determining factor for judging a road bike, because often light weight means low stiffness and extreme fragility,” say Pinarello. “Despite this, because of the new tube profiles, the asymmetry and the new Torayca T11001K carbon fibre, we were able to increase the stiffness by 12% while reducing the frame weight to 860g. And if we add the weight reduction of the new F8 Onda fork, the Dogma F8 frame kit comes at an astounding 120g less than the Dogma 65.1 [size 54cm without paint and hardware].”

In terms of aerodynamics, Pinarello say, “We studied the performance of more than 70 frame configurations as different angles of attack for a total of 300 CFD analyses.

“A true aero profile should have an 8:1 ratio. However, the UCI regulations impose a maximum ratio of 3:1. The logical solution of applying a 3:1 ratio to a round tube yields an oval or egg-shaped cross section. This, however, drastically increases aerodynamic drag.”

“With the Flatback solution adopted on the Dogma F8, the oval section is flattened on the back side [to reduce] turbulence. This new tube shape dramatically reduces the aerodynamic impact on the Dogma F8.” They’re very happy with the results. Pinarello say that they have reduced the aerodynamic impact of the new Onda F8 fork by 54% by reducing the size of the wake behind the fork legs, and that it’s 10% lighter: the raw fork is said to be 360g compared to 400g previously.

“With aerodynamic sections derived directly from the Bolide, the F8 fork legs act as sails that promote forward motion in crosswind conditions,” says Pinarello. “This effect is amplified when riding in stronger winds. The wind has always been an inevitable resistance that increases rider fatigue and hinders performance. Now with the Dogma F8, cyclists are able to exploit it.

“The drag is practically zero until the air has traveled halfway along the F8 frame. The resistance increases in the area of water bottles… [and] decreases when the air hits the seat tube, as a result of its aerodynamic cross section.

“After passing the rear brake, the… F8 does not provide any additional impedance to the air flow in that area… The rear sections of the seatstays and chainstays are effectively invisible to the air.”

The rear brake is sheltered entirely by the wishbone section of the seatstays so that it doesn't add to the drag, according to Pinarello.

And what about being 16% more balanced? What does that mean?

“Because the drive train of a bicycle is asymmetric, the frame needs to be asymmetric to balance the force that is applied to only drive side,” say Pinarello. “Your legs push on both pedals of your bicycle, while the chain drives only on the right side of your bicycle.

“It is obvious that a frame must be asymmetric to allow you to ride symmetrically.”

In other words, Pinarello say that they have taken the drivetrain forces into account when designing the frame and made the bike more balanced through the asymmetry of the frame.

Like previous generation Dogmas, the F8’s forks and seatstays curve but the amount of meandering is massively reduced. They’ve gone with an integrated seatpost clamp – which they call TwinForce – to improve aerodynamics (and the looks, we're guessing), and the new Air 8 aero seatpost will take a Shimano Di2 battery.

Other features include a small space at the top of the head tube to hold electronic groupset controllers and an Italian thread bottom bracket rather than a pressed in option. Pinarello see a threaded BB as, “By far the best solution to ensure rigidity, performance and reliability over time.”

All in all, this is a major redesign rather than just a case of tweaking details, and the drop in weight is significant. 120g is a big chunk off a Grand Tour-winning frameset, even given the fact that the previous generation Pinarello wasn't known for being extremely light weight.

When you have a Tour de France winner riding your bike, you make the most of it, and Pinarello have naturally asked Chris Froome to have his say.

“The first thing I realised with the Pinarello Dogma F8 is that just holding it you can feel immediately that the weight is a huge factor,” says Froome. “They’ve managed to get the weight right down, which for us is fantastic. Getting on the bike and trying it for the first time and taking it around a few corners, you can really feel the rigidity.

"When you push into the pedals the power goes straight through the bike. It doesn’t flex and it doesn’t move. Whatever power you put into the pedals, it goes onto the road. This is certainly a bike I hope I’m going to be winning another Tour de France on. I’m going to do everything I can to make that happen.”

The Dogma F8 frame has been approved by the UCI and will debut at the Critérium du Dauphiné which begins in Lyon on 8 June.