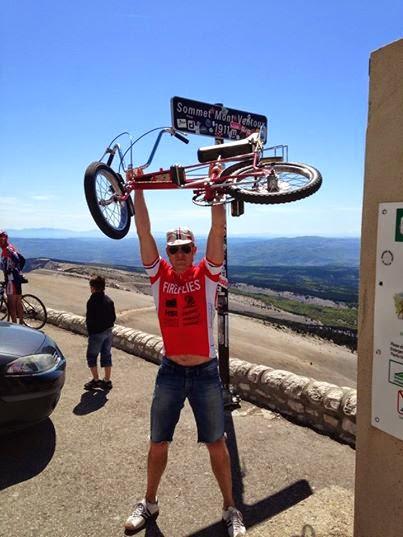 A cyclist has ridden to the top of Mount Ventoux on an unmodified Mark 2 Raleigh Chopper from the 1970s, raising money for the cancer charity Leuka.

Matt Richardson, who completed his effort yesterday, has raised nearly £3,000 for the charity.

He rode the route from Bedoin, consisting of 1,617 metres over 21.8 km: the most famous and reputedly the most difficult ascent. The road to the summit has an average gradient of 7.43%.

On his blog, Matt reported:

I felt quite springy on the lower slopes. I was glad of the morning warmth and sunshine and felt cautiously optimistic of my chances, although I knew it would all depend on what happened in the forest.

The previous day’s training ride had filled me with dread. Riding up a mountain is a completely different proposition from riding up a hill. The fatigue comes in more slowly and is far deeper. This is why rhythm is so important.

You don’t need rhythm to smash your way up a Chiltern hill half a mile long but if you don’t have it on a 22km mountain, you’re going to suffer far more than if you do. As I could see the trees becoming more dense and the gradient increasing with a couple of kicks and a hair pin bend. I began to feel sick with nerves.

As with most nightmares about things, the reality isn’t as bad. I had wanted this section to start all night and now it was real, my adrenalin was coursing.

The Chopper’s squeaking and creaking was getting worse and I was worried for a while that it would fail somehow. It kept on and I decided to use the noise to help my rhythm.

I made another decision: to keep up the cadence I had established, no matter what.  This meant that I began overtaking cyclists on proper bikes, a couple who had previously overtaken me.

This wasn't a deliberate strategy. My fear of cramp and the Chopper's lack of climbing gears meant that I preferred to ride at a pace that allowed me to turn the pedals at a reasonable rate and, although it meant I was breathing hard for the entire climb, at least I wasn't going to be stationary between pedal strokes.

The net effect was that I was moving past some people with more suitable bikes. I had been in Sturmey Archer gear one since the beginning of the forest and would have loved a zero and even a minus one but, since there weren’t, kept on.

In order to provide encouragement, I decided to continue to keep a score of the cyclists that overtook me and those I overtook.

I had a rhythm and although in the back of my mind I didn’t believe it was sustainable, I dared to believe I could do this.

As an advocate of aiming for the stars, I resolved to finish the ride in one hit as long as cramp didn’t throw me off. I also began to feel more confident that I wouldn’t get cramp as long as I kept drinking and so allowed myself to chase down a few more cyclists on carbon racing bikes.

I knew I’d pay for it later but I wanted to make hay while the sun shone and see how long it took for my inevitable decline to begin. I’d manage the problem when it happened. No use in worrying about it now. The sun was shining pretty hard and I was starting to enjoy the heat. It gave me something else to bite on.

Nearing what I thought must be the last section of forest the shouts from the cars became more excited, as though the support crew was growing in confidence too. I was constantly asked if I needed anything and felt very looked after indeed. This was a good thing as I certainly wasn’t looking after myself, showboating across a hairpin bend on the wrong side of the road (I had sufficient visibility to mean that this wasn’t dangerous) in order to overtake a cyclist who have just ridden past me.

After these daft bursts I was light headed for a few minutes. I put it down to altitude and carried on. The forest continued. I had been so absorbed in trying to get a rhythm and listening to the Chopper complaining that I hadn’t taken any notice of the distance markers and I had no idea of my progress. I thought I might be about half way up.

In order to break the monotony of the road weaving up through the trees I concentrated on overtaking more bikes, the reactions of the riders providing me with constant amusement. I counted four “Mon dieu!”s and two “"Ce n'est pas possible!"s.

As the road snaked about, I found that I would gain on the rider in front in a tail wind but struggle horribly in a head wind because the Chopper’s gears were so harsh. I was constantly shifting up and down the banana seat trying to relax my excruciating back, hamstrings and, bizarrely, my elbows, but lost all power upon moving forward. This meant I had to accelerate having shifted back in the saddle which was a devastating blow to my precious rhythm.

Also, on the steeper sections, if I sat back too far in order to allow my legs to extend more fully, I could feel the skin blistering inside my shorts and the Chopper’s front wheel would begin to skip about. I began to feel desperate and, my mind wandered. I was zigzagging up the road in an attempt to reduce the gradient. It didn’t work.

I hadn’t been drinking enough because steering the Chopper with one hand was too dangerous on the steeper bits of the climb. If I wanted a drink I had to reach into the pocket on the back of my jersey and because I was so sweaty it kept getting stuck. I ripped the bottle out and took a few desperate gulps. This left me gasping desperately and wondered whether on balance I should bother.

I began to think of the other stupid things I’ve done: 20 years of rowing training, hundreds of hours on the Concept 2 rowing machine, an Ironman, an Etape du Tour, the Raid Pyrenees, Paris Roubaix sportive, L’Eroica, etc.
I convinced myself that all these were only a warm up for this, an ascent of Mont Ventoux on a Raleigh Chopper.

Yeah, not bad, but I was still swimming through a haze of discomfort. I thought about my father who died an incredibly painful death from cancer in 1999. I imagined what he would be saying to me from a support car. A bit better but more likely to make me cry than help with this.

I thought about my children, Felix and Didi (my 6 year old son and 4 year old daughter) and what they would say to me from a support car: probably “Daddy, when can I have an apple?” and this brought me back to the moment. I realised I was in serious danger of losing my rhythm completely, cramping and having to stop.

Finally, despite having no appetite, I asked for some food. I had chosen Madeleine cakes on the basis that they had some sugar and are easy to digest. They worked. Swallowing mouthfuls of water and then sucking in huge amounts of air to try to address the deficit I decided I was going to finish this ride with no stops, no messing, no matter what.

Not only that, I was also going to catch up and overtake the group of cyclists in matching kit I could see ahead. I started to dig in very deep and ignore all the warning signs: breathlessness, back pain, leg pain, elbow pain, wrist pain, light headedness, the lot. I knew this was risky but the whole thing was a risk and if I’d wanted to do this sensibly I wouldn’t be doing it on a Raleigh Chopper, for heaven’s sake.

I caught the group of cyclists with a series of stamping bursts and then, with the summit in close sight I heard another chorus of approval from a support car. I won’t type out verbatim what I was thinking but I know that any half decent athlete will know exactly the sentiment.

I wanted to empty the tank now, ie to throw everything I had left into the pedals so that on arrival I had nothing left. I left the group of cyclists behind and pushed harder and harder. I wondered how long at this pace it would take before tunnel vision set in. It wasn’t long. I held my rhythm and pressed harder.

Then, just as I neared the final bend I was overtaken by a cyclist I hadn’t previously seen. This threw me into a rage. I overtook him on the outside of the bend and shovelled as much pace into the final hundred or so metres as there was left. It was 11.37am. Tank. Empty. Overtaken by 11 cyclists. Overtook 41.

It took a while for me to be able to stand again but when I did, I held the Chopper aloft under the Mont Ventoux sign. The support crew were fantastic. Blackett brought me some Minute Made apple juice, apologising for it not being Tizer.

For those wondering, I didn’t descend.