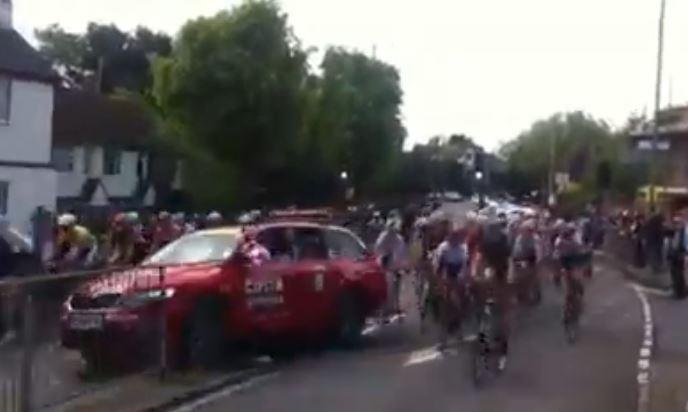 Race controller's car veers across road prior to official start of Stage 4 today...
by Simon_MacMichael

Updated: A number of riders came down in a crash prior to the official start of Stage 4 of the Women's Tour this morning - and a video posted to YouTube suggests it was due to the race  controller's car suddenly veering across the road. Race organsieres SweetSpot have told road.cc none of the riders was injured.

The incident took place in the village of Wormley, near Broxbourne, Hertfordshire when the stage was still neutralised prior to kilometre zero.

The race controller's vehicle - identifiable by the red and white chequered flag - is being driven on the left hand side of the road when, immediately after a traffic island, the driver seems to realise that the vehicle is heading straight for the railings on the central reservation.

The driver takes evasive action, and hits a road sign - but not the railings. SweetSport says no riders were struck by the vehicle, but in the confusion several riders did come down, as the video, shot by Paul Hosking, shows.

They included Aude Biannic of the Lointek team (number 61), who would finish eighth, and mountains classification leader Sharon Laws of United HealthCare, in the polka dot jersey. An unidentified rider on the opposite side of the road appears to require treatment from the race doctor.

In a statement issued on Sunday afternoon, SweetSpot told road.cc:

Yesterday on the Friends Life Women's Tour stage from Cheshunt to Welwyn Garden City an incident occurred which has drawn some interest.

At the start of every stage there is a neutralised zone where the speed of the competitors is kept low whilst the peloton moves out of the town centre and whilst the race convoy of vehicles gets into position.

Yesterday, for a short period, and whilst in the neutralised zone, several riders overtook the car resulting in the car striking a road bollard whilst taking avoiding action. Some riders fell as they in turn avoided the car, but we are pleased to say that there were no injuries to anyone. The incident took place at low speed before the race began.

Yesterday in Clacton, Essex, a man on a mobility scooter nearly caused a crash when he crossed the road while the race was in progress, with the incident caught on video by a 12-year-old boy.

The video can be seen on this BBC News Essex article, with the boy, Sam Wilkinson, saying: "I was really shocked, I thought he was going to get clipped and they were all going to pile up, if he'd only been a moment later it would have been mayhem."