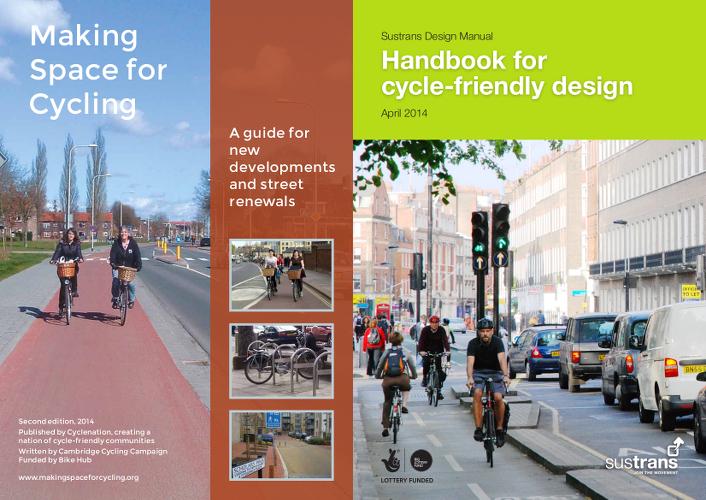 Different approaches to getting Britain cycling
by John Stevenson

You wait ages for a handbook on designing facilities for cycling and two come at once. Active travel charity Sustrans has today launched its Handbook for cycle-friendly design, and local campaign umbrella group Cyclenation is launching its Making Space for Cycling handbook at the Cycle City expo in Leeds.

Making Space for Cycling is sponsored by the cycle industry through its Bike Hub funding scheme backed by the Bicycle Association and independent bike dealers, while the Sustrans handbook is part of the organisation’s series of resources for enabling active travel.

Well laid-out and easy to read, Making Space for Cycling is the friendlier of the two documents. It also explains why towns should provide space for cycling, in terms of its benefits for both individuals and communities.

Because Cyclenation is an umbrella group for local campaign organisations Making Space for Cycling reflects some recent thinking, emphasising the importance of separating cyclists from motor traffic, and pointing out numerous examples of how not to do it.

The Sustrans Handbook for cycle-friendly design is rather denser and more technical, with lots of detailed examples of cycling infrastructure. Some of those examples have already been criticised by cycling activists, who point out that ideas such as two-stage right turns have been deprecated in the Netherlands.

Many of Sustrans’ illustrations are of designs for on-street cycle lanes, a concept many activists now believe simply cannot be done well.

Making Space for Cycling is far more of a manifesto than the Handbook for cycle-friendly design. Where the Sustrans document seems largely content to accept the status quo. For example, it says: “on-highway  design should reinforce how people are taught to cycle in National  Standards / Bikeability Level 2, in particular primary and secondary  road positioning.”

Making Space for Cycling, on the other hand, recognises the main reason people give for not cycling. It says: “mixing with traffic puts people off cycling, especially children”.

This difference in approach is perhaps most marked when it comes to obstructing cycle paths. Sustrans suggests slowing riders with “2  rows of staggered bollards. 1.5m between bollards, 5m from junction”. That’s a design that can make it very difficult to pass while towing a trailer or for disabled riders using accessible bikes.

Making Space for Cycling suggests the use of bollards only to stop larger motor vehicles from using cycling routes. “Only use an odd number of simple bollards spaced about 1.8 metres apart, arranged to separate opposing flows, not to obstruct them or force them into conflict. … The risk of motorbikes using these routes is not great enough to restrict free movement of larger bicycles or pushchairs and wheelchairs.”

You can download the two documents and draw your own conclusions:

Making Space for Cycling is available from http://www.makingspaceforcycling.org.

Sustrans Handbook for cycle-friendly design can be downloaded from the organisation’s Dropbox.