As part of their celebrations of their 125th anniversary Mavic have released a new version of their Ksyrium wheelset, and with it a new tyre system that features front and rear specific treads and technology. Only 6,000 sets of the Ksyrium 125 wheel/tyre system will be produced. There will also be some limited edition anniversary clothing; more on that later. 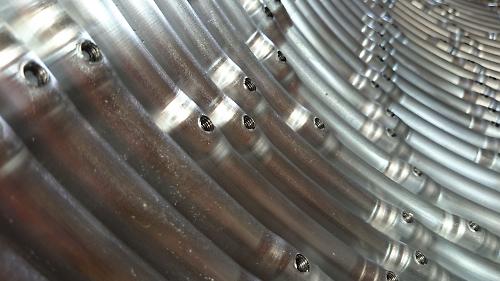 For the new wheel Mavic have completely re-tooled their inter-spoke milling technology (ISM) that they use to reduce the weight of the rim. Each individual rim is measured before milling to ensure that the correct amount of material is taken from the rim to save weight without compromising strength. In previous incarnations of the wheel this milling has been quite angular, but the ISM 4D process produces a much more rounded profile because it can remove the alloy with a greater degree of freedom then before. There’s multiple benefits to this: the rim looks a good deal nicer, for a start, and more material can be removed for a lighter wheel. On top of that, the rounded profile is more aerodynamic than the previous version.

Mavic have stuck with their Fore spoke attachment system for the Ksyrium 125. Instead of drilling the rim, the inner surface is pushed into the rim cavity and the spare alloy is threaded to accept a screw-in nipple. Mavic claim that this makes the rim four times more resistant to fatigue stress, and the fact that the rim bed isn’t drilled makes for a more rigid rim too.

The Ksyrium 125 uses a mixture of Zircal alloy spokes (on the front wheel and drive side of the rear) and Tracomp carbon spokes (on the rear non-drive side), the same as the current Ksyrium SLR; the hubs are unchanged too. The rims are deep-anodised using Mavic’s Exalith 2 technology and they have the same ribbed braking surface as the current rim. 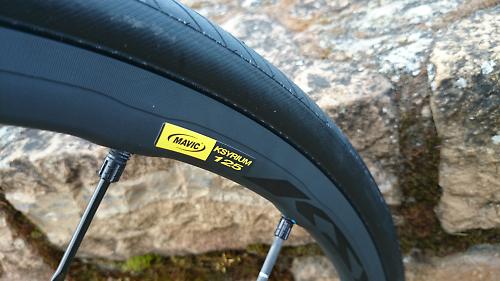 Mavic are all about wheel-tyre systems these days and they’ve developed a new Yksion Pro tyre to go with the Ksyrium 125. I say “tyre” but in fact there are two: a GripLink for the front and a PowerLink for the rear. They’re similar beasts, but with a few subtle differences. The tread on the two tyres is different, with the front using a more closely packed diagonal pattern which is reversed and more widely spaced on the rear. The puncture protection is also tailored to the wheel. At the front, where a puncturing at speed can be hazardous, Mavic use a Kevlar breaker. At the back, where it’s less of a safety issue, there’s a nylon breaker to minimise rolling resistance. Mavic have chosen a 25mm width for the Yksion Pro, and Mavic claim a weight of 210g per wheel.

I got the opportunity to have a first ride on the Kysrium 125 at Mavic’s 125th anniversary celebrations, with a 75km ride through the Beaujolias vineyards to Mavic’s rim facility in Saint Trivier. 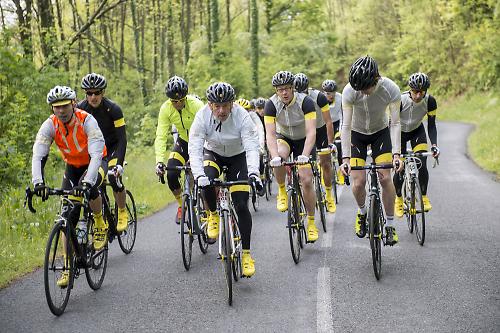 On unfamiliar roads, on an unfamiliar bike, in good conditions, it’s not really possible to draw any detailed conclusions about the ride characteristics, but the tyres roll well and the wheels are very stiff under power, as you’d expect from a wheel that’s the descendant of the super-stiff Ksyrium SLR. The grooved Exalith braking surface demands a bit of bedding in and complains noisily until it’s happy, so the descents in a group of about 30, all on new wheels and new brake blocks, were ear-splitting at times. My wheels calmed down after about 50km, others weren’t so lucky. I can also confirm that the tyres are very comfy at the 50psi I rode them at for the first 5km until I managed to flag down the yellow car and get them filled up proper. Serves me right for not checking. Still, if you’re going to have wheel or tyre problems, a fully-supported Mavic ride with neutral service is the ride to choose.

The new Ksyrium 125 wheels will be sold as a pair and cost £1,100 while the Yksion Pro 125 Griplink and Pro 125 Powerlink tyres will cost £39 each, both tyres and wheelset are scheduled for UK release between mid-May and early June.