It looks like Specialized’s Tarmac SL5, the long overdue replacement for the SL4, first introduced way back 2011, has quietly made its public debut, or so it would seem from the photos taken by Jakob Kristian Sørensen at Liege-Bastogne-Liege at the weekend.

Industry rumours suggest the company will be launching the new model at the Giro d’Italia starting next week, so a few miles between the legs of Roman Kreuziger in the Ardennes classic will have been prudent before the Tinkoff-Saxo team make the full switch. 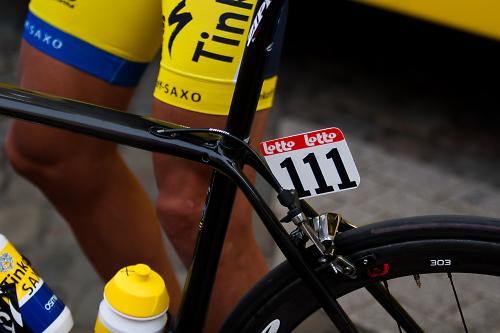 The UCI’s list of approved frames and forks was updated last on 24th April and listing under the Specialized heading is the ‘Tarmac 15’ with an application date of 15th January 2014. The 15 in the name clearly suggests this is a 2015 model year, with a worldwide roll-out to shops not likely to be until much later in the year at the very earliest.

We don’t know much about this new frame until Specialized officially spills the beans, but the photos do give an indication of the development of the company’s road race model. Visually it looks very similar, with the same curved top tube, oversized down tube, chunky chainstays and slender seatstays.

One clear difference is the new integrated seat clamp. Some manufacturers have been doing something similar, some claiming it for the aero benefits, and others for increased comfort - the Cannondale Synapse similarly has an integrated seatclamp with the idea being to allow more seatpost to deflect in an effort to provide a smoother ride. We know it’s not a Roubaix because there don’t appear to be any of the company’s ‘Zertz’ inserts in the rear stays or fork.

We imagine the SL5 will be a smidgen lighter and stiffer too - bikes always are, but by how much we’ll just have to wait and see. With many of the top-end race frames already extremely light and very stiff, there’s decreasing gains to be made in these areas. That leaves aerodynamics and ride comfort as the two remaining development paths. With the Venge still in the range and a distinct lack of aero features on the new SL5, it doesn’t appear they’ve tried to increase the aerodynamic performance.

If you want to compare these photos with the Tarmac SL4, here is Roman Kreuziger’s Tarmac SL4 photographed earlier this year.

That's about all we know for now, we'll of course keep you updated when you get more information.