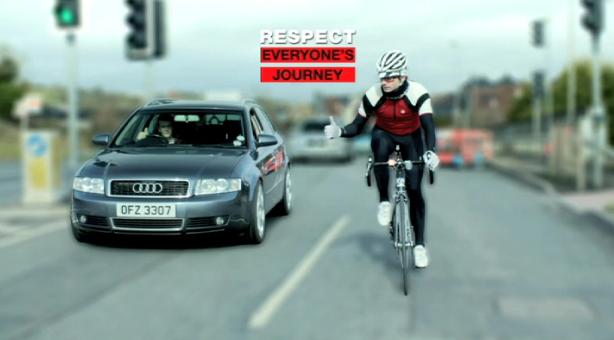 The Department of the Environment in Northern Ireland has launched a cycle safety television advert for the first time.

Designed to run up to and during the Giro d’Italian this May, the film focuses on the vulnerability of cyclists and the responsibility both drivers and cyclists have towards each other.

While serious road traffic casualties have fallen fell by 50% over the ten years to 2012, cyclist injuries have doubled.

Environment Minister Mark H Durkan said: “Cycling is much riskier than either walking or travelling by car. Based on miles travelled, cyclists are 23 times more likely to be killed or seriously injured than car users.

“Unlike the occupants of motor vehicles, cyclists have very little protection when they are hit by a vehicle. This makes cyclists especially susceptible to serious injury if they come off their bike or are struck by a car, truck or bus. Even a relatively low-speed collision can result in death or serious injury.

“The aim of the new campaign is to reduce road deaths and serious injuries involving cyclists by positively influencing the relationship between cyclists and drivers, supported by the message ‘Respect Everyone’s Journey.’”

The minister continued: “For many reasons, we have seen an increase in cycling here over the last number of years and the concept of “Sharing the Road” has therefore never been more important. If we are to drive down road casualties down further, we must all take personal responsibility for our behaviour on the road, whatever type of road user we are.”

Other advice from the police in Northern Ireland included always wearing a helmet and exercising common sense and goodwill.

The Minister continued: “Cyclists have a right to ride on the road, just as motorists have a right to drive. Drivers must be vigilant of cyclists and respect their right to use the road. Cyclists themselves need to take sensible precautions like wearing conspicuous clothing and using the road safely.

“Motorists should be patient, slow down and give cyclists plenty of space while overtaking, as they may need room to avoid obstructions like drain gratings, signal when overtaking to indicate the potential danger to other drivers and

if emerging from a junction, look closely to see all traffic, especially cyclists.

“Drivers of large vehicles like HGVs should also take a close look for cyclists who may have stopped beside or in front of them before moving off from traffic lights and take extra care when turning left.

“Unfortunately, many of my colleagues have experience of attending incidents involving cyclists. No matter who is at fault in a collision between a bicycle and a vehicle, it’s always the cyclist who bears the brunt of any impact. Our appeal is very simple, all road users should exercise some common sense, goodwill and respect everyone’s journey,”

The campaign will run on television from 18 April and will continue until after the Giro d’Italia 2014 cycle race in May.