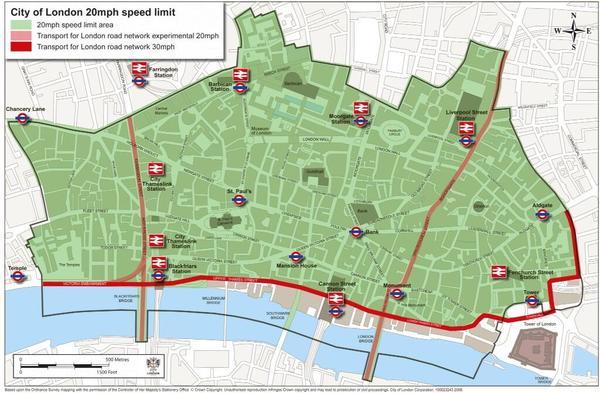 Speed limit just one of the new road safety plans by the Square Mile's corporation to benefit cyclists and pedestrians...
by Sarah Barth

The City of London will become a 20mph zone in July following a vote by the corporation’s transport committee this week.

The new limit is part of the City’s road danger reduction plan, something we first reported on in 2011, and will be reinforced on all the roads bounding the square mile with the exception of those in Westminster.

Upper Thames Street, which is a Transport for London road, will remain 30mph, but other TfL roads, between Blackfriars Bridge and Farringdon Street and between Norton Folgate and London Bridge, pictured above in pink, will be 20mph as part of an experiment into road safety.

It is thought that the scheme could reduce road casualties by as much as seven per cent.

Michael Welbank, chairman of the planning and transportation committee told Transport Network: ‘I am pleased that [the 20mph scheme] has now cleared this last hurdle to its implementation.

“For the City of London to continue its success as an international business hub it is critical that its streets should be safe for all who use them be they commuters, pedestrians, cyclists, drivers, motorcyclists, shoppers or cultural wanderers and dreamers.’

Other measures being adopted by the City of London include junction redesigns, contra-flow cycle routes and new pedestrian crossings with countdowns.

Of course 20mph zones still need to be policed, and late last year we reported a crackdown in Oxford, where up till recently police only issued tickets to drivers doing more than 32mph in 20mph zones, but was dropped to 24mph under new guidelines from the Association of Chief Police Officers.

The changes mean drivers pinged doing between 24 and 31mph would be offered the choice of £100 fine and three licence points, or a £95 speed awareness course and no points.

Between 31mph and 34mph they could be fined and over 35mph could find themselves in court.