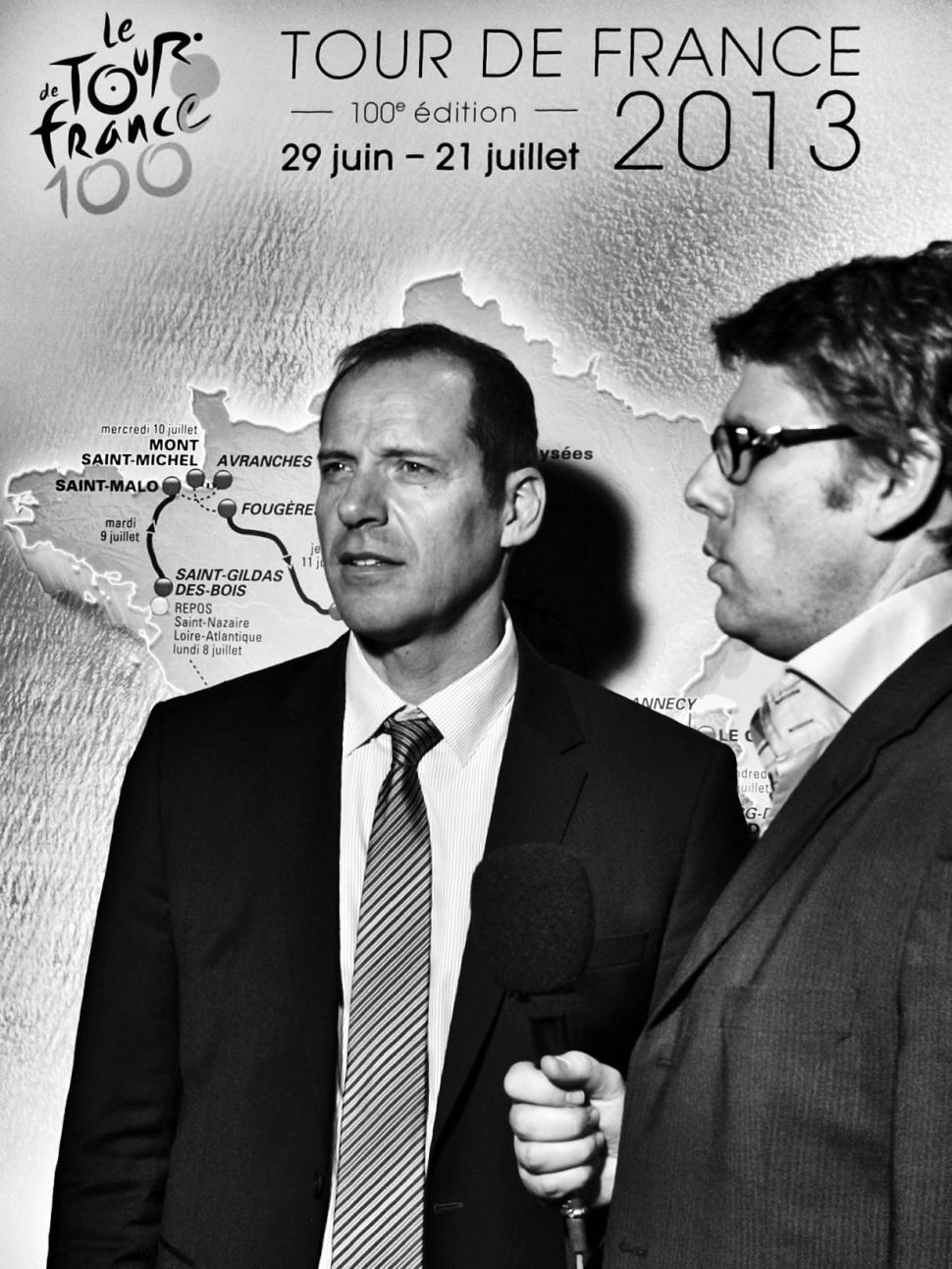 Race director Christian Prudhomme also says Yorkshire Grand Départ among toughest ever and will be "humungous"...
by Simon_MacMichael

Tour de France race director Christian Prudhomme says that the Tour de France’s visit to Cambridge this summer can help turn those who use a bike to get around each day into fans of cycling as a sport – as well as inspiring more people to get in the saddle. He also said  he expected the opening days of the race to be ‘humongous.”

No stranger to Yorkshire in recent months as it gears up to host the opening two stages of this year’s 101st edition of the race, this week has seen Prudhomme turn his attention to Cambridge and London, where the start and finish of Stage 3 will take place before the race heads back to France.

Prudhomme joined council officials on Gonville Place in Cambridge for a ceremony to mark out the location where Stage 3 of the race will begin on Monday 7 July, reports Cambridge News.

He told it: “Cambridge is a very well-known city and, with the university, it is very prestigious for the Tour. Cambridge is known as a city of cycling, and the challenge for us is to strengthen the link between everyday bicycling and cycling champions.

“What cities like Cambridge have is very important for us, because the more people we have on bicycles every day in order to go to work, for fun, and for health, the more people who will be fans of cycling for champions.”

After arriving at the city’s railway station, Prudhomme joked that he thought he was in the Netherlands, given the number of bicycles, and said that its position as the UK’s cycling capital would add a unique dimension to the Grand Départ.

“Everything is in order for July 7,” he said. “I’m sure there will be passion in Yorkshire and London but here in Cambridge there is a link between everyday bicycling and champions and I think it will be stronger.”

Leader of Cambridge City Council, Tim Bick, added: “We can show Mr Prudhomme we are well organised and that he can rely on Cambridge to deliver a great show.

“Cycling and Cambridge doesn’t need much of a catalyst to come together with a bit of excitement but the painting of the start line makes it tangible on the ground in the city, and it should be visible for a long time to come. I hope it is a rallying point.”

Prudhomme was also in London this week, with a picture appearing on the Tour de France’s Twitter account of him outside City Hall, with Tower Bridge in the background and one of the city’s Boris Bikes painted yellow in recognition of the Tour’s arrival.

While there, he told Reuters that he believes the opening days of the race in Yorkshire will be among the most difficult ever.

The Cambridge to London stage will be preceded by stages from Leeds to Harrogate and York to Sheffield, and the race director said: “We wanted a balance between the flatter stages, stages one and three, and a very different stage from York to Sheffield.

“Each will be a really hilly stage and it’s going to one of the most difficult starts to the Tour ever, at least since the start in the Pyrenees in the 1970s.

“It will be really tough and I hope and I think that we will see the overall contenders for the overall classification from the very start of the Tour.”

The last time the race visited Great Britain, when Fabian Cancellara won the London prologue, was Prudhomme’s first in charge of the race after succeeding Jean-Marie Leblanc, to whom he had been assistant director for three years.

“In 2007 in London it was huge, it was unforgettable, it was massive, but we didn’t think about coming back only seven years after,” he said.

“But since then we’ve had the first British winner with Bradley Wiggins and the Olympics.”

Crowds for each of the opening three days of the race are expected to be as big as the 1 million-plus who watched the men’s road race at the London 2012 Olympics.

Prudhomme added: “It’s perhaps going to be the most popular Grand Depart in the history of the Tour and [the stage] from Cambridge to London it’s going to be humongous.”