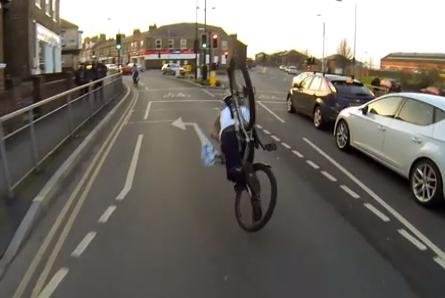 CarefulCyclist - how not to change your jacket while riding a bike.png

Cyclists’ helmet cam videos of reckless road users behaving badly or breaking the law are a Youtube staple, but here’s one with a difference those caught on camera are cyclists and it ends with a truly spectacular demonstration of how not to take your jacket off while cycling.

York Cyclists Episode 1, shot over a three week period was posted to Youtube on April 1st ago by a long time cycle commuter calling himself CarefulCyclist, but it's no joke.

It’s a catalogue of the sort of behaviour that irritates and angers other road users and that divides opinion amongst cyclists between those who believe that the rules of the road apply to everyone and those who say they are the product of a car-centric approach to traffic management and that as long as no-one is harmed the independent minded cyclist should be free to ignore them. Watch the video and judge for yourself.

“Cyclists are taking more risks”, CarefulCyclist told YorkMix explaining his reason for posting his films to Youtube: “I hope the families of those cyclists will see what those cyclists are doing, putting themselves and other road users at risk and prevent them.

“The cyclists involved should stop and think, is this risk I am taking worth it?”
He also explained why he started filming his journeys.

“I have, on a number of occasions nearly been hit by inattentive or poor drivers. if you combine poor driving with reckless cycling more and more people are going to get injured. Some fatally.”

He described those riding badly as “a small proportion of repeat offenders, I see the same faces over and over again.

“Young men seem prepared to take the greatest risks, but all types of road users flout the Highway Code.

“I see cyclists running red lights, weaving in and out of traffic, but even the most minor indiscretions like cycling on the pavement can have potentially severe consequences if the cyclist is in collision with someone elderly or a child.
“Pedestrians have been killed by cyclists.”

While some of the cycling on display is certainly of the eye-brow raising variety some may also raise an eyebrow at the inclusion of a woman using her mobile phone while cycling along a near empty bike path - on the other hand the chap briefly glimpsed riding no handed on the pavement was lucky a hapless pedestrian didn’t step out of a doorway.

The penultimate incident would seem to be an example of both rider and driver inattention although had things played out differently it is certainly the cyclist who would have paid the higher price, and that last crash? Well, according to CarefulCyclist the man got up afterwards apparently unharmed.

While his film highlights some risk taking individual in his conversation with YorkMix CarefulCyclist reserves some of the blame for poor cycling infrastructure too:

“Some of the cycling infrastructure is poorly designed and poorly maintained, cycle lanes are too narrow and sometimes bring road users in to conflict”.

The recklessness of York’s drivers and pedestrians are the subjects of his next two videos.