A carbon-fibre aero road bike priced at £2,650 in a Campag Athena build
by Mat Brett

The Six C Aero is a new carbon-fibre offering from Bristol-based Sublime Cycles. You’ve probably not heard of Sublime Cycles before because the brand was only established last year and its website went live very recently. The Six C Aero is the first model, although others, including a TT bike, are on the way. 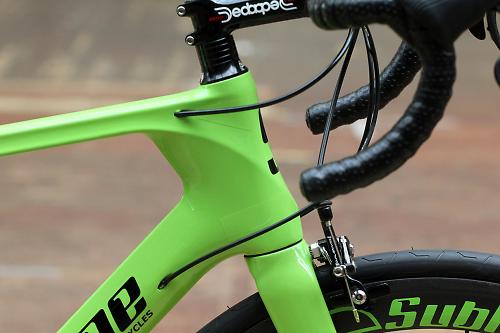 Sublime is currently using open mould designs. An open mould, for those who don’t know, is essentially a design that anyone can use. So, a brand can go to the manufacturer who owns the mould and ask for a specific number of frames, and have them made up with their own branding. The big, established brands tend to use designs that are exclusive to them, but that’s a more expensive way of doing it because developing new designs and making the moulds costs a lot of money. 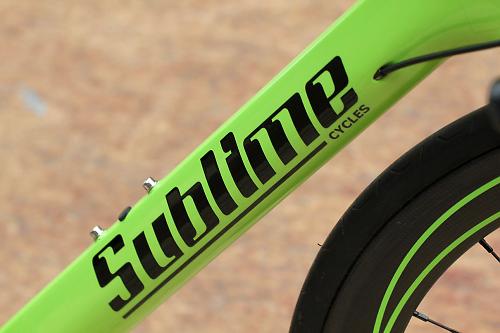 The Six C Aero, as I said, is open mould so you might see a frame that looks very similar from another manufacturer. Sublime says that its long-term objective is to get to a stage where it can use its own designs, but that isn’t the case yet. That’s fine, but I just thought I’d explain that so we all know where we are and no one feels the need to point out, “That’s a such and such with a different paint job.” Actually, feel free to do so if you like; it might be interesting. 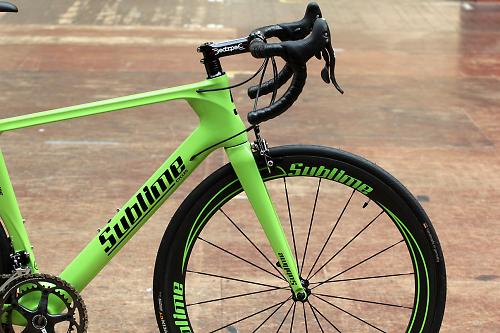 The Six C Aero displays a number of features that we’ve come to associate with aero road bikes in the past few years. The profile of the tapered head tube (1 1/8in to 1 1/2in) is very deep, for example, the down tube is a slim affair, and the seat tube is cutaway around the leading edge of the rear wheel. 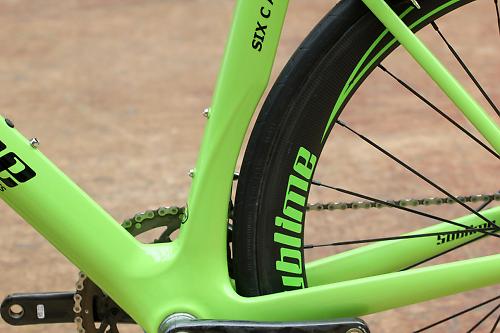 The seat tube and the seatpost are shaped for aerodynamics, with a blunt leading edge to the profile which tapers down before it’s cut off square at the back. 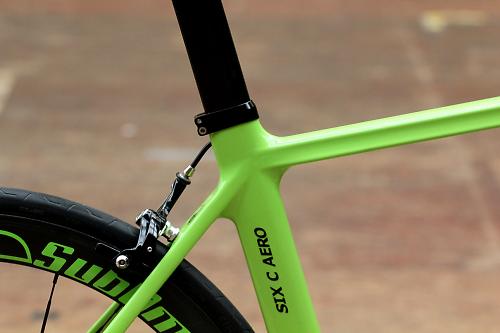 The top tube slopes significantly downwards from the head tube to the seat tube. The fluted tube walls might not serve an aero function but they look pretty neat to us. 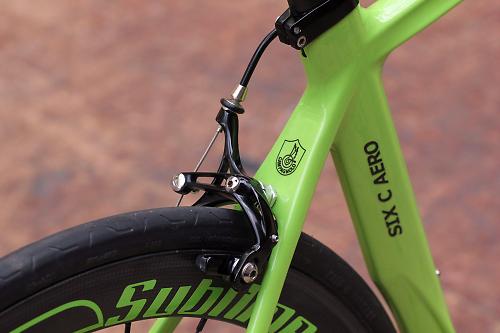 Out back, the chainstays are a chunky size while the slim seatstays are a wishbone design. 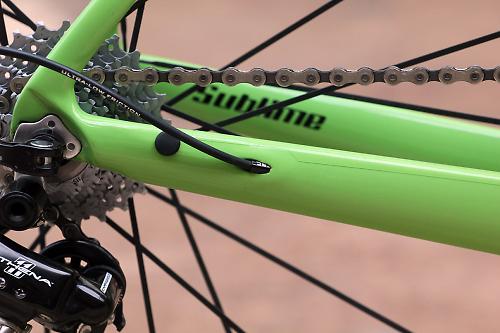 The cable routing is internal, the rear brake cable heading through the top tube and the gear cables entering the frame towards the top of the down tube. Although our bike is built up with a mechanical groupset, the Six C Aero is compatible with an electronic shift system. 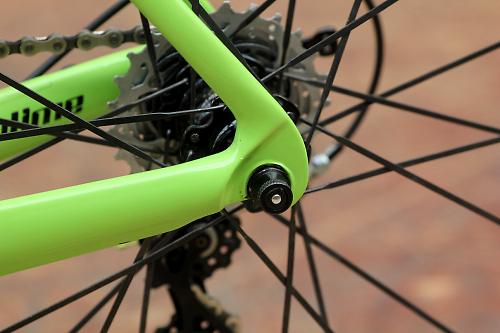 We have the 56cm version of the Six C Aero in for review, with a 56.1cm stack (the vertical distance from the centre of the bottom bracket to the top of the head tube) and a 39.7cm reach (the horizontal distance between those two points). That makes for a pretty low front end, but it’s not ridiculously low.

For comparison, a 56cm Trek Madone road bike in an H1 (aggressive) fit comes with reach of 40cm (just a touch longer than that of the Sublime), but with a 54.6cm stack (1.5cm lower than the Sublime’s).

In contrast, Cervélo stick a fairly long head tube on their S5 aero road bike, reasoning that most people want a bit more height and you’re better off, from an aerodynamics and stiffness point of view, achieving that position via a tall head tube rather than a stack of headset spacers. That’s why the 56cm S5 comes with a 58cm stack height (almost 2cm higher than the Sublime’s). 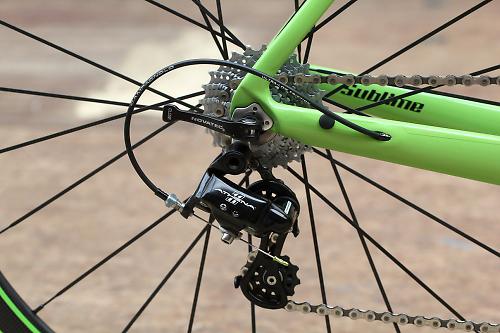 Anyway, that’s just an around-the-houses way of saying that the Six C Aero’s ride position is aggressive but not crazy (of course, you can always adjust it to some extent with headset spacers, stem length and angle, or handlebars with a rise). 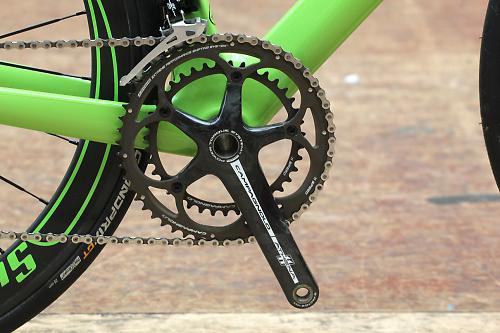 Sublime paint their frames in Bristol. You can go for a single colour of your choice (you don’t have to have this vivid green) or opt for a custom design which will cost extra. 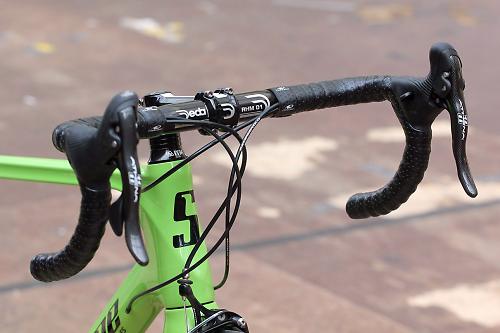 Sublime offer the Six C Aero as a frameset (guaranteed for two years), if that’s what you’re after, for £850. If you want a full custom paint job, the frame will cost from £1,150, the exact price varying according to the design. 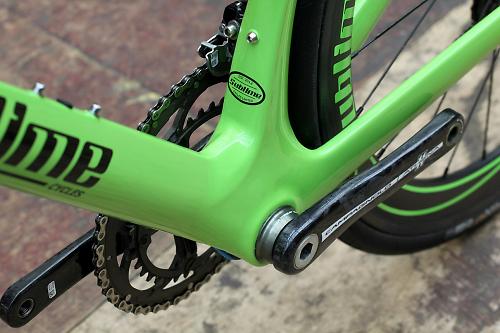 If you’d prefer a complete bike, Sublime provide custom builds. You spec the bike according to your budget and they’ll build it up for you. There are a few example builds on the Sublime website. 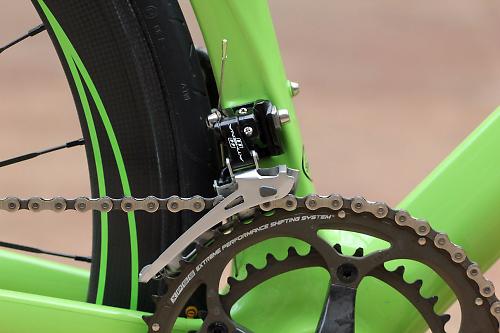 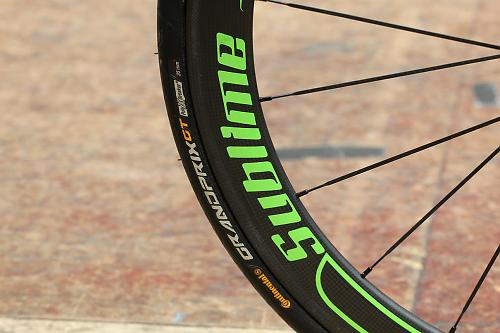 The handlebar is Deda’s RHM-01 alloy model and the stem is from Deda too: a Zero1 with flip flop graphics so it won’t look too weird if you turn it over to adjust your ride position. The saddle is from Rido. 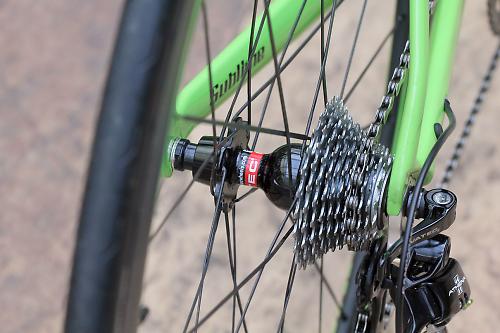 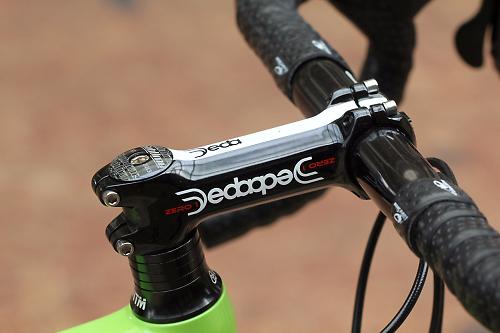 There aren’t all that many Campagnolo Athena-equipped complete bikes out there – well, not compared to Shimano 105, for example – although you can always spec it on bikes through things like Ribble’s Bikebuilder. 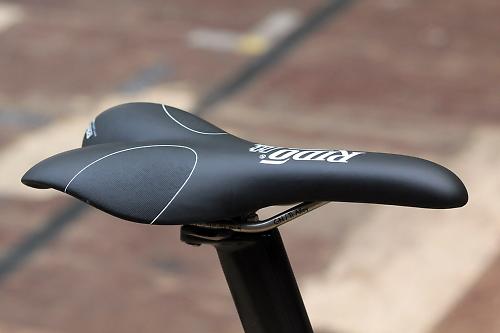 Cinelli’s T700 carbon-fibre Saetta Radical Plus comes with an Athena group, except that the chainset is from Miche, and Campag’s Scirocco 35 wheels. That’s priced at £2,199. 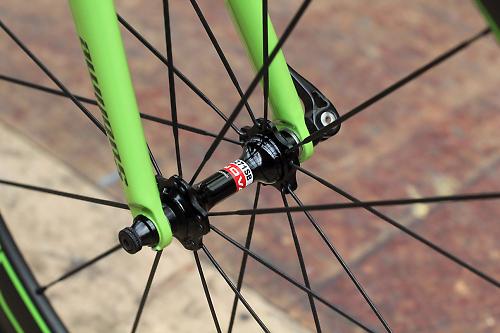 As we mentioned, you don’t have to have the Six C Aero in an Athena build, you can have it equipped with whatever components you like. You just tell Sublime what you want and they’ll get back to you with a price. They say that the turn around time on a bike is 3-6 weeks.

Okay, that’s the basics sorted. We need to get this bike out on the road. We’ll report back with a review shortly. In the meantime, go to Sublime’s website for more details and keep an eye on their Facebook page.