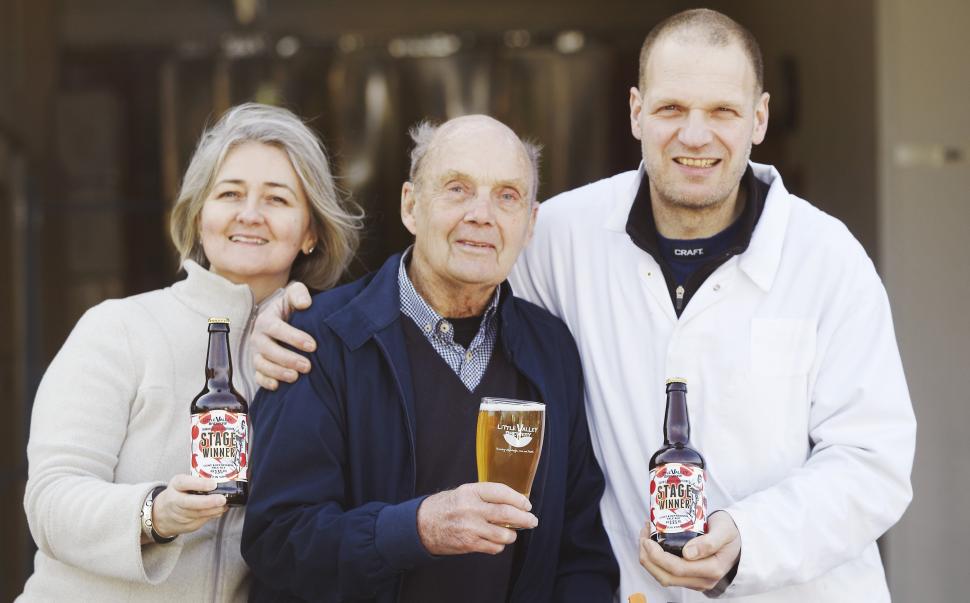 Yorkshire pubs are joining the preparations for the Tour de France Grand Départ in July with a special edition celebratory beer and an ale-house-to-cycle-hub transformation.

The Wagon and Horses pub in the small Yorkshire village of Langsett is also joining in the celebrations. With the help of cycle clothing brand Polaris Bikewear, the small-town watering-hole will undergo a transformation from popular pub into The Pedalers Inn cycle hub for the month preceding the Tour.

The Stage Winner special-edition celebratory beer is being brewed in the Yorkshire town of Cragg Vale by Wim van der Spek, part-owner of the Little Valley Brewery, and his business partner Sue Cooper.

The partners are both keen cyclists and invited Brian Robinson to its launch event in Leeds.

The light ale, which has been made in tribute to the 83-year old veteran cyclist, will come with a custom label and pump clip featuring a polka-dot design to celebrate Robinson’s success in the mountains throughout his cycling career.

At the Stage Winner launch event in Leeds, Robinson said: “Sue and Wim are as passionate about cycling as they are about their beer so it is no surprise that in the year the Tour de France comes past their brewery they have created a beer to celebrate cycling success.

“In July I’m sure we’ll all be toasting the success of the Tour in Yorkshire with a pint of two of Stage Winner.”

Robinson has continued to ride into his later years, and looked to beat his own record for climbing Holme Moss earlier in the year with the help of an electric bike.

As the first Briton to complete the Tour de France in 1955, Robinson paved the way for later British successes on the European road racing scene.

The Yorkshireman won Britain’s first Tour de France stage in 1958, and repeated the feat a year later with a mountain stage victory in to the French town of Chalon-sur-Saône.

Robinson also found success away from the Tour de France, particularly in the eight-stage Dauphiné Libéré in 1961, which he won.

Little Valley Brewery’s Stage Winner is not the first Tour de France tribute beer we’ve covered in the build up to race’s visit to Yorkshire.

After the announcement last year that the Tour would be rolling over the Yorkshire Dales, the county’s Great Newsome Brewery near Hull released their Maillot Jaune beer.

The beer, which is named after the Tour de France leaders’ jersey, has citrus hints and features Tour de France winner Bradley Wiggins on the label and pump clip.

The Wagon and Horses pub, for which Polaris and a team of design students from Leeds Met University have undertaken the cycle-hub transformation, will open under new branding on June 7 complete with Tour de France theme.

The pub will remain in its continental and bicycle friendly garb for the month running up to the Grand Départ celebrations and then for the duration of the Tour.

The main focus of the project is not aesthetic celebration, but to create a true cycle hub in an area which has great cycling credentials.

Polaris are also working alongside the local community to hold a number of free events for locals and tourists to get involved in.

The cycle clothing brand are working with the local Langsett Cycle Festival to create an Easter Egg Hunt for the children and a number of road and mountain bike rides for the grown-ups. The company’s team of students are also directing their efforts towards the design of a Grand Départ Jersey.

If you’re interested in Polaris’ preparations for the Tour de France you can check out their Facebook page.