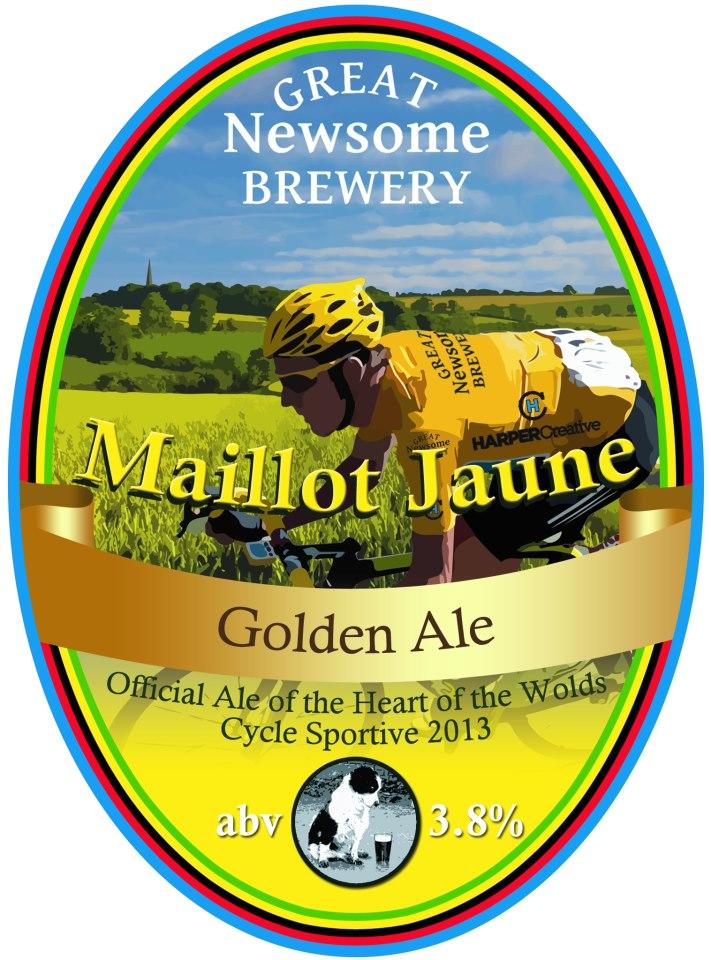 Tour de France-inspired tipple from Great Newsome Brewery is official beer of this weekend's Heart of the Wolds Sportive ...
by Simon_MacMichael

A Yorkshire brewery has been inspired by next year’s Grand Départ of the Tour de France in the region by launching a new beer called Maillot Jaune – and all cyclists completing the Heart of the Wolds sportive this weekend will get a chance to sample it.

The beer, which has a low alcohol content, has been launched by Great Newsome Brewery, based in Winestead, East Yorkshire, reports the Hull Daily Mail.

The brewer’s founder and managing director, Matthew Hodgson, said: "Tour de France riders would often stop off for a quick beer alongside the route in days gone by, and while we don't expect next year's riders to halt for a tipple of our ale, we are hoping the beer proves popular with all types of cycle enthusiasts."

James Harper, whose company Harper Creative helped develop the beer, the logo of which features Bradley Wiggins wearing the yellow jersey with the Yorkshire Wolds in the background, said it was aimed to find fans both among cyclists and real ale lovers.

"Great Newsome Brewery has created a wonderful light ale with a hint of citrus and a low alcohol content which I'm sure will make it popular for cyclists in need of a bit of refreshment after a ride," he said.

Danny Richardson, manager of the Great Western Bell Hotel in Driffield, remarked: "The pump clip is really distinctive and has been attracting lots of attention.

"People who have tried it say they really like its light fruity flavour."

Phil Hoskins, organiser of the Heart of the Wolds sportive, which is based in Driffield this year has a sell-out entry of 600 riders, added: "Cycle sportives are becoming increasingly popular but we really want to make our event different from the rest, and having an official event ale, and one with such a cycling theme, will do this.

"We are also delighted we have managed to involve two innovative East Yorkshire companies in this project.

1
Five cool things coming soon from Ribble, PNW, Wahoo, Rapha and dhb
2
Near Miss of the Day 436: "Jerk in a Jaguar" overtakes cyclist into oncoming traffic
3
Tory MP helps force removal of pop-up cycle lane in Reigate after just three days
4
Nairo Quintana hit from behind during training ride
5
How are the UK’s pop-up bike lanes being received?
6
Near Miss of the Day 435: Close pass followed by right hook
7
“No excuse” – councillor slams motorists who drove on pavement to get round road closure as emergency infrastructure ignored in London and beyond
8
Near Miss of the Day 433: Police tell cyclist “We all have to share the road” after very close pass from lorry driver