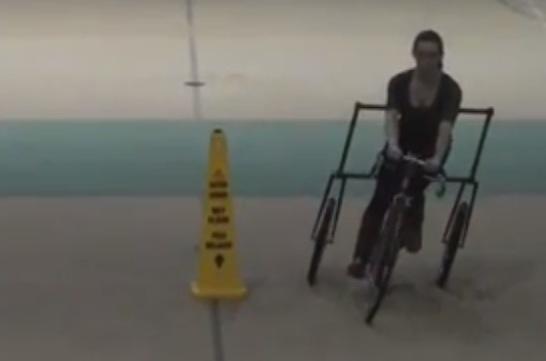 Cornell University experiment shows that while it's gravity that causes you to fall off, you need it to steer...
by Simon_MacMichael

You can't steer a bike in zero gravity. That's the verdict of researchers at Cornell University after conducting an experiment not in outer space but the more mundane location of a sports hall.

The team at the School of Mechanical & Aerospace Engineering at the Ivy League institution, located in Ithaca, New York, made what they term a "bricycle" to conduct their research.

It's described as a hybrid between a tricycle and a bicycle, and also has a "zero rest-length spring" which can be adjusted for stiffness.

"At some intermediate value of stiffness, the spring restoring torque cancels the gravity capsizing torque and the bricycle is, for balance purposes, effectively in zero gravity; when not going forwards it is in neutral equilibrium for leaning."

The effect of those adjustments on attempting to steer the bricycle are clearly shown in this video:

Professor Andy Ruina says that while it's gravity that causes cyclists to take the occasional tumble from their bikes, it also proves vital when it comes to steering.

According to the university's website, the findings of the research may prove helpful to designers of mobility aids to assist with rehabilitation from injury, as well as manufacturers of what are termed "narrow-track vehicles," aimed at reducing traffic congestion, such as the Nissan Land Glider shown in this video.

Professor Andy Ruina, who presented the research at the American Physical Socirty's annual meeting in Denver, Colorado earlier this month, said: “What our research shows is that you’ve got to be careful.

“But I’m sure the people designing these things have made this discovery one way or the other,” he added.