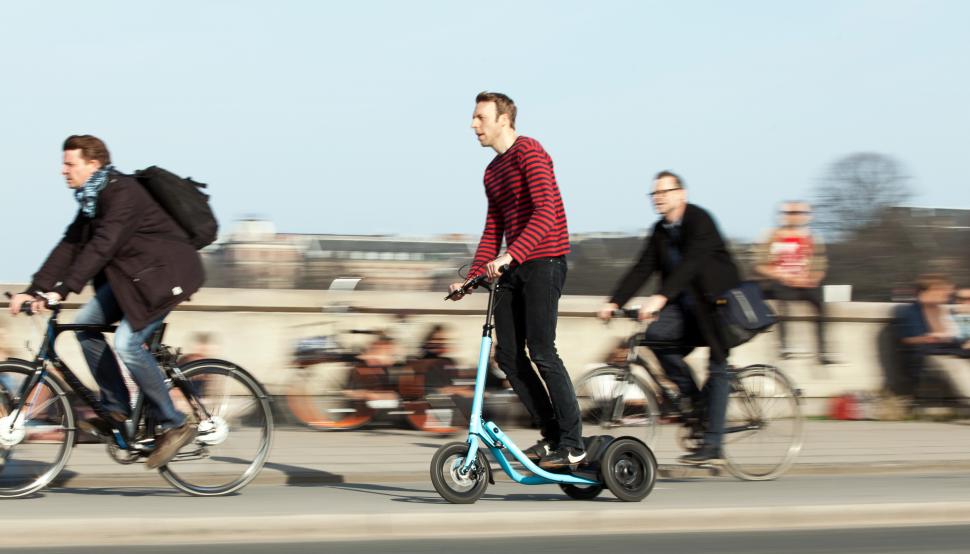 Could this Kickstarter project from Copenhagen be a rival to the bicycle?

City is not built for being active and mobile" - says inventor based in a city rest of world aspires to for active travel...
by Simon_MacMichael

A company based in the Danish capital, Copenhagen, is seeking Kickstarter funding for a product called the Me-Mover, which is described as similar to a “streamlined step machine,” and has received its worldwide launch today.

Its billed as “an entirely new way to ride the city under your own power,” has taken five years to design, and is now ready to move into production – which is where potential backers on Kickstarter come in.

Inventor Jonas Eliasson says the three wheeled vehicle should be thought of as “"a human-powered Segway" – although there’s perhaps a bit more of a resemblance between that machine and another Kickstarter project we featured last week, the Halfbike.

Here's Eliasson talking about it.

Eliasson says: "Since you ride standing, you can see further, and ride safer."

The rationale behind the vehicle is Eliasson’s belief that “the city is not built for being active and mobile, so we designed Me-Mover to solve that."

While he’s talking about urban environments in general, once prototypes were built five years ago, his team set themselves the challenge of trying to win over the locals in Copenhagen, where around a third of people ride a bike to their place of work or study each day.

"We knew if we could win over the global cycling capital, we could take on the world."

Back to that Segway comparison. It’s possible that the only time you’ll have seen one in the wild may be in a city on the continent, ferrying tourists around as part of a guided tour.

That’s one need the Me-Mover is already set to fill, with tour company tour company, BeCopenhagen having ordered 20 units.

Its CEO, Søren Herlev Jørgensen, explained: "Our tourists have tried other vehicles and they tell us Me-Mover is the best way to know the city.

“It can fly along with the cyclists, but it is the only vehicle that also lets them go as slow as pedestrians.

“For visitors who want choice – to stop, talk to people, smell the flowers, shop the farmer's market¬– Me-Mover is the way to go."

All of which you can of course do on a bicycle.

With a month left on the Kickstarter campaign, the Me-Mover is already over halfway towards its $100,000 target.

You’ll find full details of the product, the technology behind it, its potential applications and the claimed benefits on its Kickstarter page.

So what do you think – an idea whose time has come, or another product that is perhaps trying too hard to push open a gap in the market that isn’t there?

1
Police officer caught on camera telling cyclists to ride in single file to be given "education around traffic offences"
2
Cycling UK slams Government and threatens legal action for "excluding" cyclists and horse riders from new Wainwright Coast to Coast National Trail
3
Snake Pass section shuts to all road users... but cyclists can still reach the summit (and turn back around)
4
Why was Mark Cavendish riding with Lance Armstrong this week?
5
Cyclists report multiple muggings and thefts on London cycle route
6
Canyon revamps Inflite cyclocross range for 2023
7
Near Miss of the Day 827: Two close passes and a screenwash shower
8
‘Dangerous cycling is not a priority,’ police force says