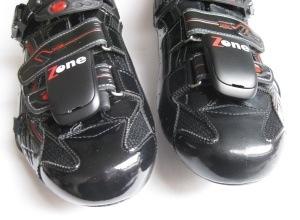 The Brim Brothers cleat-based Zone power meter is set to be launched in August this year. The Dublin-based company intends to offer their product to people who have pre-ordered to begin with, before making it available on general sale.

We’ve told you about the Brim Brothers system a few times before, the first time nearly three years ago. They had originally hoped to get the product on the market in 2012, but the process has taken considerably longer than expected. Even now, the launch date isn’t guaranteed; it could still be later.

The Zone system works with an adapted version of Speedplay Zero cleats, so the power measurement is taken right at the point where your power is transferred to the bike. Sensors inside the cleats measure the force between your shoe and the pedal, and your power is calculated from that. You can get separate power measurements for each leg. A cable runs around the side of the shoe to connect the cleat sensor to a transmitter than sends the data to a head unit.

Zone uses the ANT+ wireless data protocol which means it will work with any other ANT+ device capable of displaying power output from its software, such as a Garmin Edge bike computer.

Zone measures forces and calculates torque all the way round the crank revolution, so you can get torque effectiveness and pedal smoothness measurements if you have a display that shows them. It’ll give you a cadence measurement too.

Brim Brothers haven’t given a price for their system yet. That will be released closer to the launch date.

Since Brim Brothers initially announced the Zone design, a couple of other power meters have come out that are pretty simple to switch between bikes: the Garmin Vector pedal-based system and Stages’ crank-based system, for example (as long as you have the same, or similar, chainsets on different bikes). Unlike the Brim Brothers Zone, neither is as simple as just getting off one bike and getting onto another.

Brim Brothers say, “When the Zone is available we will work our way down the pre-order list in the order they were received, offering one to each in turn. We have so many pre-orders already that it may take us until the end of 2014 to work our way through them.”

For more info go to www.brimbrothers.com.