When the folks at the Velo Cafe heard that British time trial legend Ian Cammish was putting his 1983 record-breaking time trial bike up for sale on ebay late last year because his wife was fed up of looking at it above their fireplace they knew we had to dig deep, pool their money together and buy it. 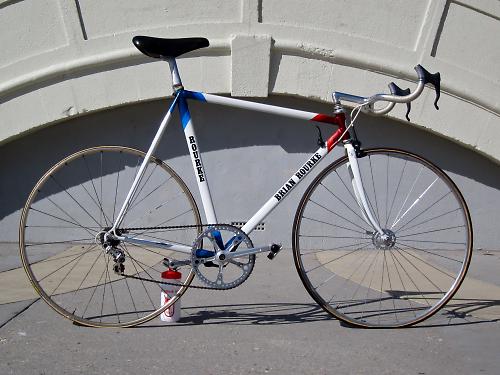 So they did, and as of April 3rd it will be hanging in the Brighton cafe for everyone to appreciate over a pre-ride coffee or post-ride cake. 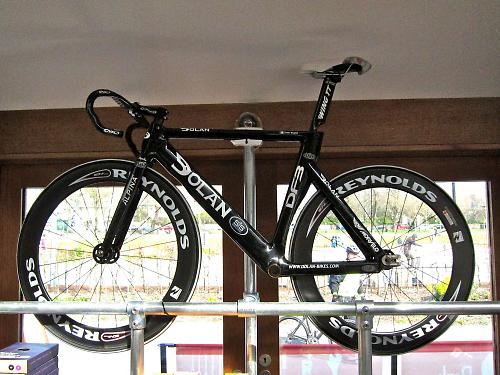 The Velo Cafe like their cycling history, already hanging above diners are two bikes with heritage. On the one side of the cafe is Felix English’s Dolan track bike. Felix is a Brighton boy done good who cut his teeth on the local roads and round the track just up the road in Preston Park and he’s now in his third year riding for the Rapha-Condor-JLT team. As a junior, he won five British national titles until he decided in 2010 to represent Ireland, home of his parents, and it was in that country’s green jersey that he rode this black bike against Sir Chris Hoy at the 2010 European Track Championships in Poland and in a stunning result beat the Olympic champion to the line. On the other side of the cafe is the slightly more utilitarian bike of Brighton journalist Adam Trimmingham. A reporter for the local Argus newspaper Adam used this 1975 Carlton bike to travel all over Sussex to cover local news and as he’s never owned a car, or even passed a driving test, the bike has travelled over 30,000 miles. 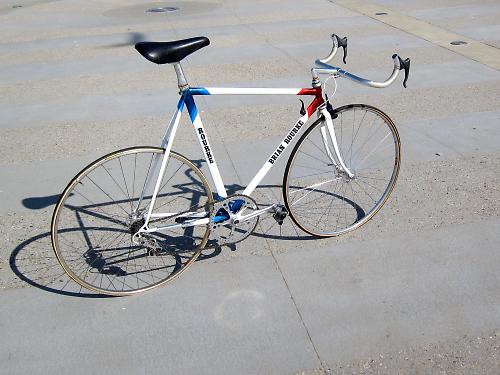 Now the Velo Cafe are adding Ian Cammish’s Brian Rourke time-trial bike to their small collection, a bicycle that’s made Cycling Weekly’s Top 50 Greatest Bikes of all time list. In the days before aero bars, streamlined frames, aero-helmets and all the other slippery benefits gained through wind-tunnel testing ‘funny bikes’ with sloping top tubes and upturned bars ruled the dual-carriageways of the UK time trial scene. Ian Cammish dominated time-trialling throughout the 1980s, winning the British Best All-rounder series nine times between 1980 and 1989 with only the 1987 title escaping him. In 1983, Cammish broke the competition records for out-and-back 100-mile and 50-mile distances, becoming the first rider to top 30mph for 50 miles. He still holds the Road Records Association titles for straight-out 50- and 100-mile rides. The bike he’s selling was built by Brian Rourke, a frame-builder who can still make you something special and fast if you’re after breaking a record, just ask Guy Martin. Some of the equipment on the bike isn’t original spec, Cammish used PMP L-shaped cranks back in the day but they cracked a long time ago and have been replaced with superlight Tevano ones, which are still special enough. The wheels are probably not the wheels the records were broken on either but they did win National Championships nevertheless according to Ian. They’re Campagnolo Record large flange hubs with Mavic OR10 and Super Champion rims in a 28/28 spoking. The Seta Extra No 3 tub on the rear is knackered with a frayed sidewall but the No 1 tyre on the front still holds air apparently. Other parts to get gear geeks all a tizzy include a Mavic rear derailleur that was functionally a clone of the Campagnolo Super Record of the time and is a collector's piece in itself and the Modolo Kronos brakes that cost “a bleedin' fortune” according to Cammish. In a pleasing case of what goes around comes around the rear brake is hidden behind the bottom-bracket, just like a lot of modern TT and even road bikes. That and the concealed cables. Pedals are rare Cinelli M71s. Predating by about a decade the Look design that made clipless pedals ubiquitous they were popular with time-trialists of the age, no-one else ever used them as they were impossible to get out of in a hurry. To release the shoe a rider had to reach down and pull a lever on the outside edge of the pedal, a complicated manouevre if you needed to unclip quickly, leading to some calling them Death Pedals. Cinelli also supply the bars and quill stem. 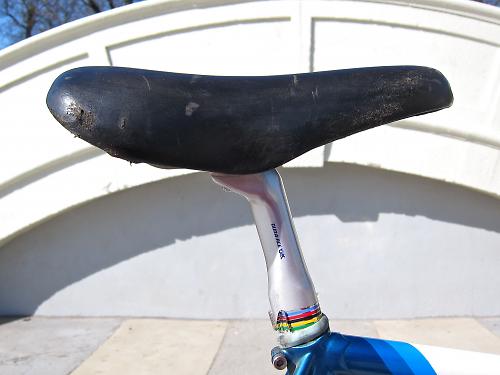 Shimano Dura Ace provide the 7400 threaded headset and aero seatpost with the latter having a Cinelli buffalo saddle bolted onto  it that looks like a comfy Chesterfield sofa compared to current saddles. 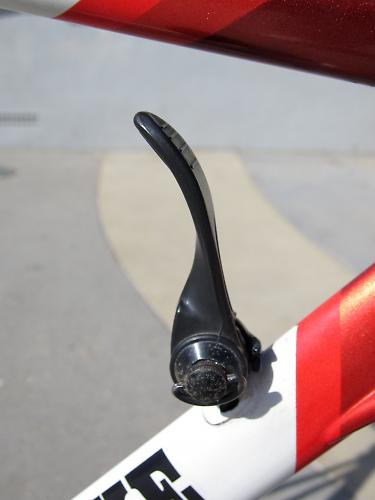 Another item of note is the centrally mounted Modolo Kronos gear lever shifting six, count ‘em, six friction gears at the back matched to a drilled 56 chainring up front. 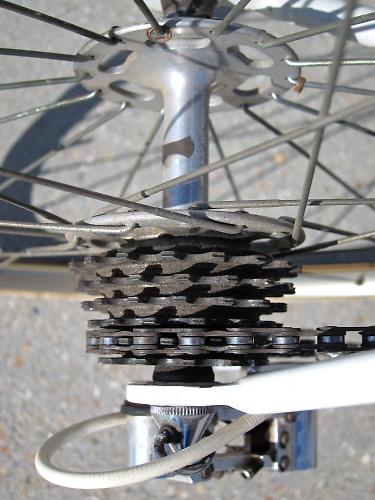 The bike has a 59cm frame with a 59cm top-tube, measured along the tube centre to centre, that’s quite big but almost irrelevant as it’s not going to ever be ridden.

Cammish wanted this bit of time-trialling history to go to someone who would look after it after they bought it and the Velo Cafe are definitely going to do that. To celebrate buying the bike the Velo Cafe are hosting a very special evening on Thursday April 3rd. As well as unveiling the bike there will be a talk and a book signing by Peter Whitfield, Author of 'Time, Speed and Truth - The History of Time-Trialling 1890-2010'. The book is the first-ever comprehensive history of time-trialling from its origins in Victorian England to the present day. 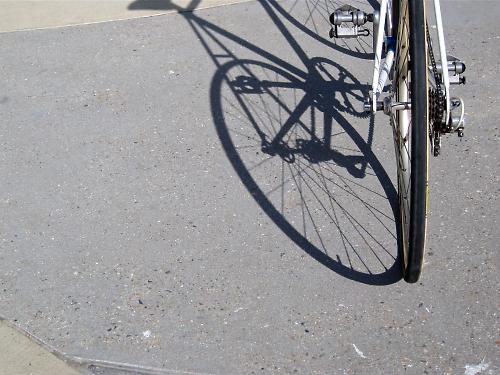