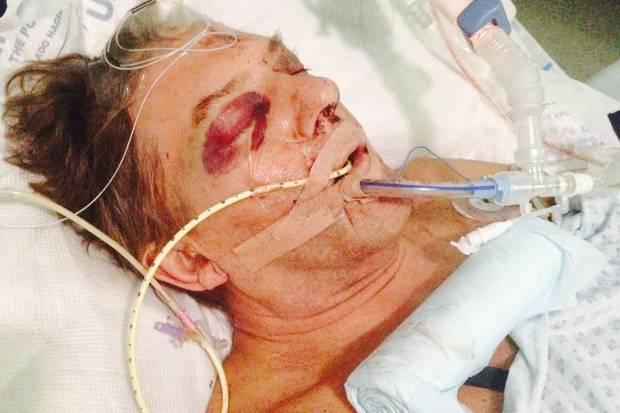 The family of a cyclist who died last Friday, three weeks after being hit by a car on London’s Regent Street, have issued a picture of taken of him in hospital as a warning to motorists to take care when sharing the road with bike riders.

Retired teacher Michael Mason died at St Mary’s Hospital in Paddington, where he had been taken after he was hit by a Nissan 4x4 on Regent Street, just north of Oxford Circus, on 25 February, reports the London Evening Standard.

Mr Mason sustained broken ribs, a fractured skull and severe brain injuries in the incident and was placed in a coma in the hospital. His life support machine was turned off last Friday after he returned to a “permanent vegetative state.”

The Standard says that four days earlier, on Monday 10 March, his family – including his ex-wife and two daughters, and his three sisters – had been at his bedside at St Mary’s, where they sang ‘Happy Birthday’ to him to mark his 70th birthday.

The family has now released the above picture of Mr Mason to serve as “an illustration of what can happen to cyclists on London’s roads”.

His daughter, Anna Tatton-Brown, said: “Dad was always cycling. He has been riding in London ever since he moved here in the 70s, so if this can happen to someone like him who had so much road sense, it can happen to anyone.

“He was very experienced and had cycled all across London. My dad always kept very fit and was surgically welded to his bike ever since he was a teenager, which is why it came as such a shock.

“We are heartbroken. He was one of life’s genuinely nice and funny people. He was the best dad in the world and my best friend. I think I have spoken to him every day for the past 33 years.

“He had a wicked sense of humour and loved art and photography. We’ve been inundated with messages from people.”

Ms Tatton-Brown said motorists needed to be aware of the danger that cyclists can face.

“One of the last conversations he had with me was that he was worried about how negligent some drivers can be in London and that cyclists need more room,” she said.

“As a family we don’t know what happened, but something needs to be done to improve road safety.”

Police questioned the female driver of the Nissan following the incident but no arrest was made.

Last week police issued a fresh appeal for information, with Detective Sergeant Jeff Edwards saying: "I am grateful to a number of people who stopped at the scene to assist the casualty that night.

"This stretch of road was fairly busy with commuters, and I would urge anyone who may have seen any of the parties in the moments leading up to the collision, or the collision itself, to contact police.

"I also wish to trace any person who may have moved or had any contact with the pedal cycle."

Anyone who has information is requested to call the Serious Collision Investigation Unit at Hampton Traffic Garage on 020 8941 9011, or the charity Crimestoppers, anonymously, on 0800 555 111.