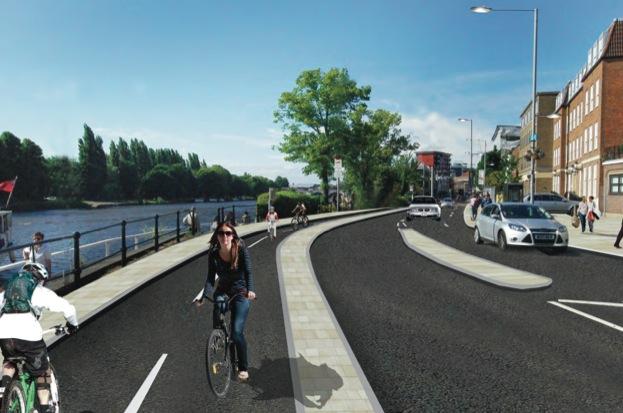 Enfield, Kingston and Waltham Forest get £30m each to become Mini-Hollands

The London boroughs of Enfield, Kingston upon Thames and Waltham Forest are each to get around £30 million in funding as part of Mayor of London Boris Johnson's 'Mini-Hollands' initiative. The winning bids were confirmed at London's City Hall this morning.

Five other boroughs had been announced on last September's shortlist for the funding, which aims to prioritise cycling in outer London town centres, including through rediesigning junctions using Dutch-style infrastructure.

The unsuccessful boroughs are Bexley, Ealing, Merton, Richmond upon Thames and Newham. The first four will share the remaining £10 millon or so of the £100 million put aside for the initiative, while Newham will get money from a separate source for works in Stratford town centre.

Today's announcement gives brief details of some features of the successful bids:

Kingston – A major cycle hub will be created and the plaza outside Kingston station will be transformed. New high-quality cycling routes will be introduced together with a Thames Riverside Boardway, a landmark project which could see a new cycle boardwalk delivered on the banks of the river.

Waltham Forest – A semi-segregated Superhighway route along Lea Bridge Road will be developed as well as a range of measures focused on improving cycling in residential areas and the creation of “Hackney-style” cycle-friendly low-traffic neighbourhoods.

Mr Johnson said: "I have been incredibly impressed with the standard of the mini-Holland entries and by the thirst among all the finalists to transform themselves into better places for people. It has been so hard to choose between them that I have decided that all shall have prizes.

“Areas once terra incognita for the bicycle will, over time, become every bit as cycle-friendly as their Dutch equivalents - places that suburbs and towns all over Britain will want to copy.”

Transport for London's director of surface transport, Leon Daniels, said: “From the moment we launched the Mini-Holland programme we have been blown away by the ambition and scale of the proposals from boroughs across London.

"The proposals from the eight finalists were all of exceptional quality and we look forward to working with them all to help make town centres across London more friendly and accessible to cyclists and pedestrians.”

Reacting to today's announcement, Ben Addy, senior communities officer at the susttainable transport charity, Sustrans, said: "The Mini Holland announcement is a real opportunity for the selected boroughs to fundamentally change their town centres by opening them up and making cycling the normal and best way to get around.

“I hope that the boroughs will seize upon this chance to engage closely with communities and user groups to ensure that local needs are met and ambitions realised.

Also revealed today were the first two Quietways announced last year. Those will run from Greenwich to Waterloo, and from Walthamstow to Bloomsbury. Six further routes "have been selected for accelerated delivery next year."

German Dector-Vega, director for Sustrans London, said: “We are extremely excited about these first two Quietways as they are both routes that people already use or where significant regeneration will take place.

"There is already great ambition and collaboration between local authorities, Sustrans and TfL to put forward designs that will provide a high quality experience for all cyclists.

"They will be fun to ride, will show off some attractive back streets and will greatly reduce barriers to cycling.

"New links, improved crossings and better access to the many attractions along each route will make local trips and journeys into central London easier.”

British Cycling policy advisor, Chris Boardman, added: "The boroughs that have won funding today have demonstrated that they understand what a vision of a true cycling nation looks like.

"Almost half of London households do not have a car, and around a quarter of journeys in inner London are now by bike, so it's logical that infrastructure and resource for this desirable form of transport reflects this.”

Here are links to download the bid documents for Enfield and Kingston.

Enfield also produced a video to accompany its bid: