Nine out of ten drivers claim it is sometimes hard to see cyclists while driving and more than half (55%) are often ‘surprised when a cyclist appears from nowhere’, according to a new poll.

The survey, conducted on behalf of the AA comes as the motoring organisation launches a national “Think Bikes” awareness campaign, which includes a video demonstrating one way of getting drivers' attention.

Every cyclist is familiar with the Sorry Mate I Didn’t See You (SMIDSY) excuse when a driver puts a rider in danger. The AA admits that ‘failure to look properly’ is the most commonly cited (42%) contributory factor in UK road accidents. Drivers failing to properly look in their left mirrors has also been cited as a factor in numerous cycling casualties.

The AA’s answer is to distribute a million free stickers as a reminder to drivers to do a ‘double-take’ in their mirrors for cycles and motorcycles in their blind spots. The AA suggests that the cycle sticker is placed on the passenger’s side and the motorcycle one on the driver’s side. 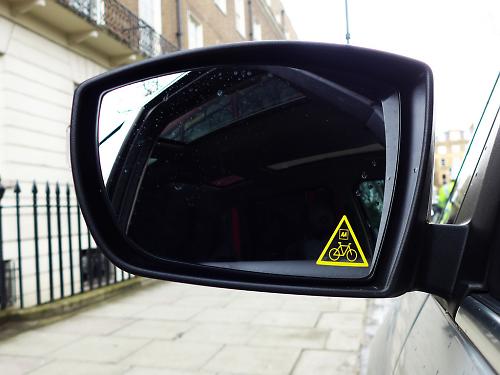 The stickers can be picked up from Halfords and will also be distributed by the police and directly to AA members.

Edmund King, AA president, said: “The AA Think Bikes campaign is definitely needed when half of drivers are often surprised when a cyclist or motorcyclist ‘appears from nowhere’. Those on two wheels never appear from nowhere so as drivers we need to be more alert to other road users and this is where our stickers act as a daily reminder.

“Likewise riders need to be aware that they may not always be spotted by drivers. We hope that this campaign can reach the parts that other campaigns can’t reach.

”Greater awareness alongside education, enforcement and improved infrastructure will make our roads safer for all.”

British Cycling, Sustrans, London Cycling Campaign and the Institute of Advanced Motoring (IAM) have all welcomed the campaign.

British Cycling’s policy advisor Chris Boardman said: “This move by the AA is a welcome step in creating a culture of mutual respect between all road users. We know that cyclists and drivers are often the same people – nine out of 10 British Cycling members also drive a car. This sticker campaign reflects the importance of looking out for everyone on the road, regardless of what form of transport they use.”

Claire Francis, Head of Policy for Sustrans said: “We welcome this initiative by the AA. However, road user behaviour is only part of the issue. Many of our roads are not fit for cycling. We need urgent action by the UK Governments to cycle-proof our roads to make them places where cyclists feel they belong.

“20mph must be made the default speed limit and HGVs should be fitted with appropriate safety features and restricted on our roads at the busiest times.”

LCC Chief Executive Ashok Sinha said: “The most important thing that can be done to improve cycling safety in the UK is to design streets that minimise the risk of collision between motor vehicles and cyclists and pedestrians, as they have in countries like the Netherlands.

“That won’t happen overnight, which is why in the meantime initiatives to promote responsible driving like Think Bike from the AA are important in helping to reduce death and serious injury to cyclists.”

IAM director of policy and research Neil Greig said: "The IAM welcomes any campaign which raises awareness of how vulnerable cyclists can be around motor vehicles. Reminders can be useful but the best drivers should already be looking out for cyclists at all times."

Sceptics might question the effectiveness of putting stickers in wing mirrors when crashes are caused by drivers not using them in the first place. And not everyone is impressed with the idea of yet another awareness campaign, given the lack of effect of previous such initiatives.

Mark Sargeant, chair of the GB Cycling Embassy, said: “We've been asking people to look and think for over eighty years, without much success.”

Fortunately, though, the AA does have a solution to what we have to do to get drivers to actually notice us, demonstrated in this campaign video: