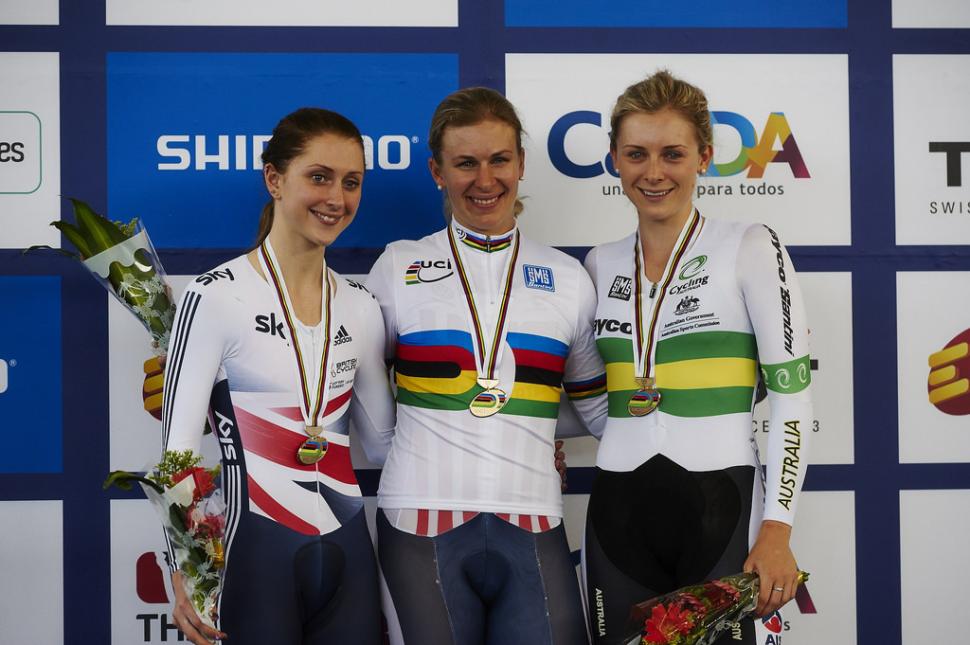 UCI Track Worlds: Silver and bronze for GB on final day in Cali

Great Britain secured two medals on the final day of the UCI Track World Championships at Cali Colombia yesterday, Laura Trott taking silver in the Omnium and Becky James bronze in the Keirin.

The country ended fourth in the medal table with five medals in total. Two of those were gold – the lowest haul at a world championships since 2006.

Trott began the second and final day of the Omnium six points behind defending champion, Sarah Hammer of the USA. The gap between the two women would remain the same at the end of the day.

The British woman, world and Olympic champion in the event in 2012, finished second to Hammer in both the individual pursuit and the scratch race.

She also finished second in the final event of the competition, the 500m time trial, but Hammer was just two places behind her and retained her crown.

Bronze went to Australia’s Annette Edmondson, meaning the podium positions were the same as they were in Minsk last year.

Afterwards Trott, who helped Great Britain secure gold last week in the team pursuit, told the British Cycling website. "I am actually happy with how this has turned out.

"I had a few shaky moments in the World Cups, not winning and just getting lucky at Manchester World Cup [in November].

"I always think – although I do always want to win every single race that I enter – this time before London [ie 2010] where was I?

"I was still a junior. And the next year was Apeldoorn and I finished 16th. And then I went on to win the following year.

"Although I would've absolutely loved to have won, I'm really pleased with how I got on and how I am improving in each event."

Three British women started the Keirin, but only defending champion Becky James progressed to the final, where Germany’s in-form Kristina Vogel took her third gold medal of the championships.

James was squeezed into the bronze medal spot by Australia’s Anna Meares.

"I'm really happy," said James. "It's always disappointing not to win but Kristina Vogel has been flying all season. She deserved it.

"I was going out to win it. I should have tried to beat her to the jump but she went over on Anna and Anna had a nice little slipstream while I was just hanging on the outside.

"I really enjoyed it. It's a nice way to finish."

Francois Pervis of France took his third gold medal in Cali as he beat Germany’s Stefan Bötticher 2-0 in the final. Bronze went to Russia’s Denis Dmitriev.

There was confusion at the end of the Madison as the Belgian pairing of Jasper de Buyst and Kenny de Ketele celebrated victory.

But it emerged shortly afterwards that the win had gone to Spain’s David Ntaner and Albert Torres instead.

Commissaires said that Spain, as well as silver medallists Czech Republic, Switzerland, who finished third and fourth-placed Austria, had all gained a lap on the field.

However, no indication that those teams had gained a lap had been given to TV viewers or those in the velodrome while the race was in progress, leading to the confusion at the end of the race.